Met Jared at the bottom of Big today at 6:15. Little was closed for control work so the plan was to start at Brighton and head over to Little via Twin Lakes Pass. Hiking into Solitude from Brighton on the way to the pass, we felt like we were in a war zone. Multiple shots were fired about 200 hundred feet over our heads and snow was sloughing over our intended path. Not wanting to piss off the patrollers, or die, we turned around to see if we go get there from the base of Millicent.

These guys (Brighton patrollers just out of bounds) blocked the way. 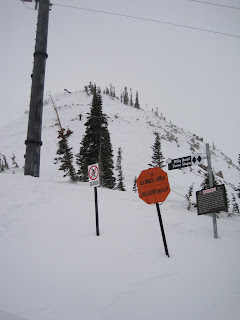 They more or less ordered us out of there so we went down and across the way towards Peak 10420 from Brighton. On the way down that run, Jared hit a rock and compressed the edge on his $30,000 race skis. Big Bummer. By this time, the shooting had slowed so we tried to make a run through Brighton and Solitude again and found ourselves at the top of a nice powder run down toward the lake. Had to ski it. Then had to break trail back up to the pass where it was turning out to be a pretty nice day. 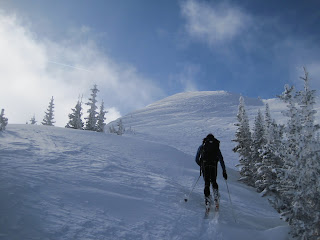 Jared led the way across the top of the slope pictured above and found a little wind loading but crossed without incident. I walked pretty lightly since I weigh more and would have been pissed to have my day ruined there.

Looking down into Wolverine Cirque. Best saved for another day. 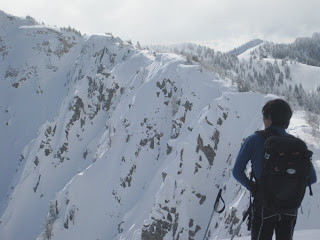 We headed over to Flagstaff to get in a couple laps but the Samurai was not immune to... 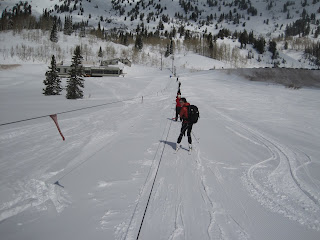 By this time it was HOT. Sweating balls hot. I was in a T-shirt, gloveless, and beginning to work. We had some food on top of Flagstaff and then on the way down, the Avy magnet triggered this: 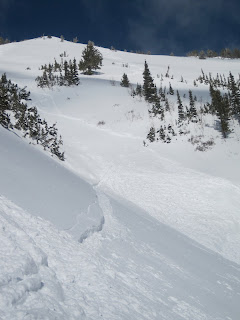 Actually, he intentionally ski cut the slope above the gully, and was rewarded with a crack and a slide while he stood and watched from above.

Out of water and feeling feeble, I was starting to lag behind on the second Flagstaff lap. Jared gave me his water and I ate some Powergels and ended up coming back to life. We refilled water at the Goldminer's Daughter and then headed back over the pass, into Brighton, and down to the car. Good day. First day over 10K. 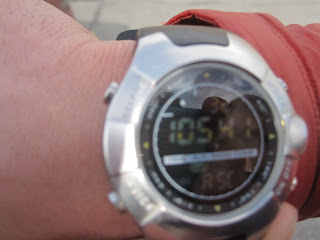