So I've been keen on riding my bike to work lately but haven't been bothering with the inconvenience of wearing my helmet. Well, let the next few pictures be a lesson to any of you boys or girls who think you can get away with being stupid.

Getting picked up by the paramedics 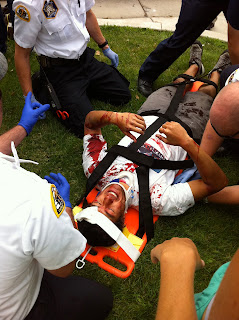 SS and JR were driving to meet me for lunch when they saw me all bloodied on the side of the road. They followed the ambulance up to the U and kept me company while I blabbed on incoherently 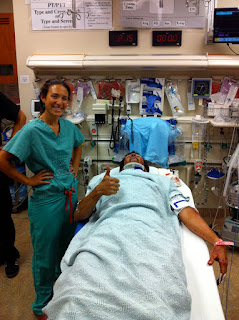 Those sting a little 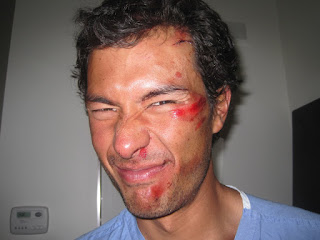 I was riding down South Temple on my way to meet my classmates at Sawadee when, while accelerating through an intersection between 20 and 30 mph, I felt a pop and my bike locked up and began shaking violently. I tried to regain control... and then woke up in the trauma bay at the U of U Emergency Dept. Actually, I remember about 30 seconds from the ambulance where I tried to tell the paramedics that I didn't need the C-collar because I could clear myself clinically (i.e. no C-spine tenderness, no distracting injury, not intoxicated, etc). They weren't buying it as I was in and out of consciousness and really goofy. I have a few recollections of having my clothes cut off and recognizing my colleagues in the ED, which was hugely comforting, as well as seeing some flashing lights in the CT scanner. But, it wasn't until nearly two hours after the accident that my head cleared, from which point my memory is intact. A friend sewed up my head, others snuck in some ice cream, and Jessie was by my side as soon as she heard about it. I feel pretty lucky that a headache, some stitches, and a lot of road rash are all I got. Maybe, if I had had a helmet on I wouldn't have had any loss of consciousness or cut my head as badly.

So again, lesson of the day? WEAR A HELMET!

Minor setback to the Speedgoat plans, but hopefully I'll be up and running soon.
Posted by SLC sherpa at 5:03 PM 6 comments:

My mistress, winter, left me in the Tetons about 3 weeks ago. Since then, I’ve been wandering, running aimlessly along SLC’s abundant trails, pushing the tether out farther each time. I’ve been on runs up Ensign and Grandeur Peak, Black Mountain, and along the front side of Timp. I'm flirting with summer and some of what she has to offer...ridge runs, climbing, speed traverses. However, it's all really just a bunch of ideas right now.

But, over the 4th weekend, something resembling my winter provided some good times.

Adam, and co-interns SS and MF joined me for a run up Baldy. The snow was patchy until the mid mountain lift but I didn't care.

These guys look pretty happy too 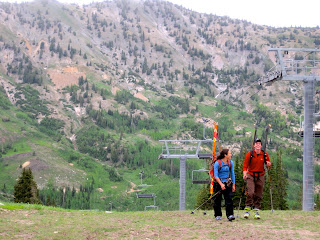 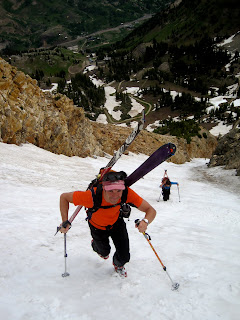 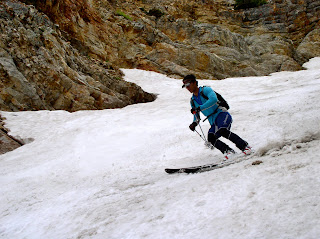 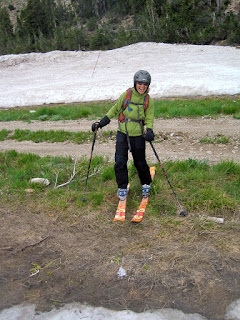