The stars aligned yesterday and Jared, Jason and I were able to make a mad dash to GTNP to try and make a speed run at the GT.  Conditions this spring have been nearly perfect after the monster winter and the word was out that buddy Nate Brown had just set the standard at 7 hours and 15 minutes.  He realized this time would likely be broken and was incredibly encouraging, offering up key beta that the Chevy was still "full" and downclimbable.  His view on this project is refreshing and is that we (those of us that like stopwatches and tights) are all in this together and that we might as well try to further the collective goal of going as fast as possible.  No secrets.  Only positive vibes.
For a little more backstory, we have all wanted to make a speed run all winter but Jared has really been the instigator of the "Light and Fast" mentality.  In fact, it was an email from him saying he was heading up to Jackson that got us all motivated.  I think we've developed a synergistic energy in SLC with all of us contributing ideas, different skills (ice, climbing, ropework/anchors), and motivation.  Nate's recent record added fuel to the fire.
We arrived at the Lupine Meadows TH late Monday night and tried to grab a few hours of sleep before our 4:45 departure time.  Donning running shoes with our kits on our backs, we were off jogging the flats and fast hiking the up en route to Garnet Canyon.  This wasn't all that uncomfortable given we weren't carrying too much.  No ropes, no rock/ice pro, no avy gear, no bulky winter clothing.  Jared had Trab race skis and his DNA boots along with Camp Nanotech crampons.  Jason and I both had Dynafit Nanga Parbats, TLT Performance boots, and Petzl Dart/win crampons.  We also brought along two ice tools and Whippets.
This first leg went well and we were skinning through the Meadows 1:16 into the day.  Nate had kindly provided us with splits at the Meadows, Glencoe Col, and the summit so we had targets to shoot for.  We were already ahead of pace.  From there, we skinned with ski crampons the majority of the way up the Teepee Glacier before switching to boot packing.  At this point, I began to fatigue a bit, but stayed focused on trying to keep contact with the other guys.  From the onset, I was worried I'd get dropped given a subpar fitness level secondary to TOO much work lately.
Jared stated the other day that,
"Skiing in a group made us faster.  We know each other well, and worked well together.  In addition to some trail breaking, the collective mental energy (and the knowledge that your buddies would leave you for dead if you stopped to tie your shoe) made us faster."
As I stumbled over the Glencoe Col, the other guys were already beginning their transition to crampons and pulling out their ice tools.  The watch read 2:38.  I took a minute or two to drink a coke and slurp down a couple gels.  When I looked up they were gone.  Damn.  Pulling around into the Stettner, they were a couple hundred yards up, nearing the entrance to the Chevy.  I put my head down and tried to grind out the last segment while getting bombed by ice chunks.  We passed a group of three in the Chevy who shouted encouraging words as we soloed past.  They appeared to be having fun and I hope they found the adventure they were looking for.
Out of the Chevy and into the Ford, my rhythm became 75 steps and rest for 15 seconds, look up and curse because I wasn't closing the gap.  75/15.  75/15.  75/15.  Then, I look up and... summit block!  Then I hear Jared screaming at me, "DON'T STOP! RUN! RUN!"  Those guys were laughing.  I was laughing on the inside but was outwardly blown.  They were 3:27 to the summit and I was a few minutes back from that.  They had finished transitioning and choked down some food.  As I walked up, they grabbed my skis and pack to aid the transition.  I yanked off my crampons and switched my boots to ski mode.  By the time I stood up, all I had to do was step into my skis and we were off.  I loved it.
One pic of how I felt on the inside...the other of how I looked (pretty messed up) 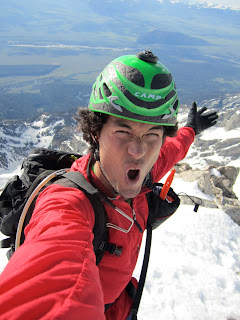 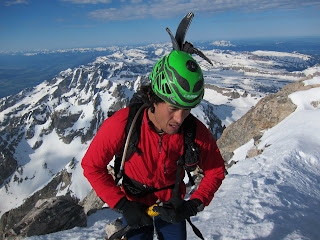 Not caring that the upper mountain was bullet proof, we dropped off the summit and made enjoyable turns down the upper face and Ford Couloir.  It was controlled group skiing on a mission and I loved it.
At the top of the Chevy, we put the skis away and pulled out the spikes and picks for the down climb.  First Jared, then me, then Jason.  We down climbed quickly and securely and were soon skiing the sloppy Teepee en route back to our shoes just past the Meadows.

Jared had more difficulty with the isothermic snow on his thin race skis and we were back in our shoes as he pulled in. The watch read 4:37.  Jason and I walk/ran through the patches of snow that remained and ran easy down the upper switchbacks until Jared caught back up.  From there it was three guys in tights, bombing downhill with skis and boots on our backs, scaring tourists with what must have been a mix of glee and despair on our faces.  Glee because the day was nearly perfect and the record was in the bag.  Despair because the legs were becoming less and less willing to keep the pace.
A couple mishaps - my pack coming open and all the contents spilling onto the trail, slowed us by a few minutes, but we suddenly found ourselves on the broken asphalt that makes up the last few hundred meters before the Lupine Meadows TH.  Jason was in front shouting and laughing.  Jared and I were side by side happy to see the sign.  As Jason exited the trail, he was yelling, "Stop the watch!"  We thew down our packs/skis/boots, and the watch read 5:17.  I loved it.
The cool thing...?