Yesterday, my "son" Kyle Perry and I went out to the Uintas for a little run up Kings Peak. I had heard the trail is between 24 and 32 miles long, but once out there, we met a guy whole gave us directions for the best semi runnable trail and he claimed it is exactly 26.2 miles. Kyle is a former NCAA national champion in the steeple chase and currently runs for New Balance. I definitely had my hands full chasing him up hill for 13 miles. 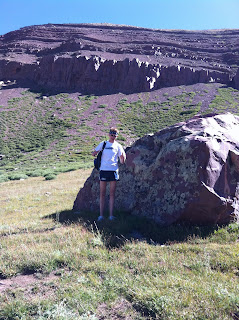 Above video and pic taken with my new iphone 4

About a mile from the summit, we bumped into a couple guys on their way down that I recognized from a long time back. They were trying to run the "fastest known time" for Kings Peak. I guess there is some website that keeps track of the fastest reported times for many classic hikes/runs. Apparently, Kings is yet to be reported, so those guys figured they'd start with the record. Kyle and I were running steadily, but taking our time to stop and take pictures and chat with backpackers that were trying to figure out why we were underdressed and without big packs. But, on the way down, our conversation about the fastest time lurked in our minds and we ran a bit faster...until Kyle started to cramp up a bit and I was happy to join him in what became a walk/run/walk/run routine for the last couple miles.

Strolling back into the parking lot, we were surprised to find the other runners hanging out waiting for one of their lost buddies. They were eager to ask our car to car time (they had been holding the record for the "fastest known time" ...for that afternoon at least). That was until we informed them of our 5 hrs 29 min and 01 second new "record". They were good sports and it was fun to see other people out trying to cover some alpine ground quickly.

I'm sure there are tons of people who have run this trail faster. I can think of a few, just in SLC, that could probably knock off a good chunk of time. Sub 5 hrs wouldn't be too hard if we weren't goofing around so much, not that I'll be back for a while. And, I think the urge to ski in the Uintas is probably satisfied for the time being after seeing the long flat approaches and relatively gentle terrain.

Anyway, I have a few more summer plans in the works before the seasons change. But, like I mentioned at the end of the video...the count down has begun. 121 days until the winter solstice.
Posted by SLC sherpa at 5:29 PM 3 comments:

Last Saturday was the Speedgoat 50K, the brain child of Karl Meltzer 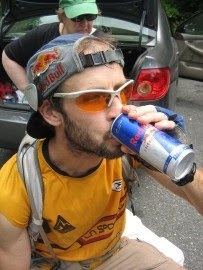 Karl runs ultras in the mountains and wins a lot of them. He touts the Speedgoat as the toughest 50K on the planet. Which, in the middle of the summer in Utah, and with nearly 12,000 vertical to gain and run down, he might be right. The Samurai wrote extensively about the day here, so I'm just going to publish a bunch of pictures - none of which I took. All pics from the event are from Pure Light Images (photographer Thomas Martens), race profiles by Jared Inouye and stolen from his blog. And the pic of the "Speedgoat" above is from the backcountry.com website. If anyone has a problem with me reposting, let me know and I'll take em down. 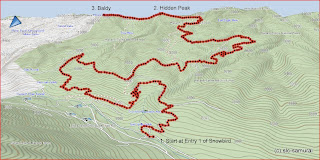 It started with a huge 8 mile climb to the top of Hidden Peak and then over to Baldy.

Then we descended into American Fork amidst multitudes of rednecks out on their ATVs and dirt bikes. Don't they know they could have just run out there? It was at the turn around point that morale hit an all time low. I sat in a lounge chair eating a popsicle and just watched people come and go until I could heave myself out of the chair and up the 5000 ft(?) climb back to Little Cottonwood.

A cruel joke had us descending down Peruvian Gulch before heading back up the Cirque Trail to Hidden Peak. Some where along here my quads started cramping and each step got uglier and uglier. From Hidden Peak it was 6 miles of rocky down hill "running" to the finish. I cramped continuously from chest to legs and definitely walked some stretches. Surprisingly, my feet felt fine. I wore Nike Lunar Flys and got a bunch of snotty looks from other runners who wondered why I didn't have on dedicated trail shoes. 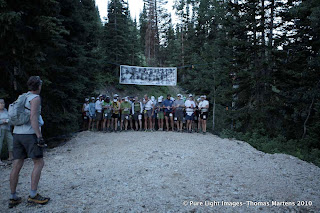 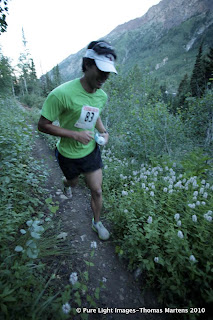 Walking near the top of Baldy. I'd guess 10ish miles weren't "runnable" for me, which resulted in a bunch of hiking. 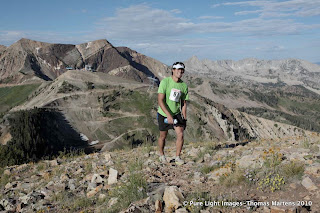 About 20 miles in I started to feel pretty good again (for about 4-5 miles before the real self destruction began). I made up ground on a few people and it was nice to be running after some steep sections out of AF. 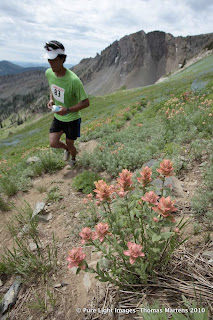 And, I was feeling better than this guy. 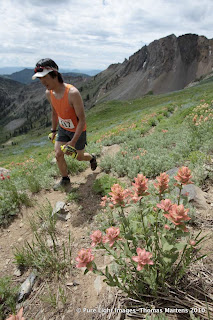 Jared's blow up happened about 3-4 miles before mine so I was lucky to stay in front (but behind about 20 others) the rest of the way.

To recap, it was hard. Really hard. There's a lot more to it than just running. Nutrition is a big deal and I think I may have gotten a bit behind as evidenced by the cramping during the race and the fact that when I got home, both legs seized so badly in the driveway, that I fell down and called Jessie to come help me into the house. I think my overall feeling is that these distances are totally foreign, difficult to adjust to, and strangely alluring. I took a few days off, but am already scheming up plans for another...
Posted by SLC sherpa at 8:38 PM 3 comments: