Little brother Sam had a rare day off work so we were delighted to get to ski a special line with him today. Back in 1999, while I was living out of the country, my family moved to a house on the hill in Pleasant Grove, UT.  They sent me a photo of the view from the front porch which was of a snow capped peak (North Summit of Timp).  I've been captivated by that picture since.  So today, we started from our doorstep around 6:30 to ski a subtle couloir that drops west from the saddle between the true and false North Summits on Timp.  Not knowing the name, I'm gonna call it the Front Porch Couloir since it's highly visible from our front yard.  If someone knows the real name, I'd love to hear it.

We were on dirt in our running shoes until crossing the bridge at the head of Grove Creek Canyon.  From there, we were able to skin to the summit ridge.
Rather firm conditions made for fast travel and in just a couple hours we found ourselves through the couloir and working our way up the massive upper snowfields.  We felt that with the new snow (even with a hard crust) and the predicted 70 degree temps, the West Face would turn into a war zone later in the day.  Even so, while Utah Co ate breakfast, we were putting on beanies and drawing our hoods tight as it was still nice and chilly.
The pitiful little storm that skirted around us yesterday did do us the favor of enhancing all the cliff bands with a gorgeous coating of rime ice that became the subject of many pictures throughout the morning.
On the summit ridge, we took a peak down into the Grunge Couloir which we skied from just below the top earlier in the year.  At that time, the entrance seemed to be loaded up and guarded by a nasty cornice.  Today, it looked worse.  Right at the fixed pins/rap station, we were able to peer over the edge and it looked loaded to the brim.  HUGE cornices overhung the entrance elsewhere, threatening utter destruction.  We passed.
Numerous rime enhanced pics telling the rest of the story:

Over the past week I've skied with old friends, poked around Lamb's Canyon (very nice) as part of my commute home from work, and have been shut down a few times by weather/conditions.  Patience has been the name of the game.


Today we skied the Apollo Couloir on Mount Olympus.  Although not very difficult, it's a nice aesthetic line that I've been eyeing for a long time.  The natural linkup is to ski the couloir and then go eat a burger at Apollo Burger.  We did just that.
The debris continued for a while and then we broke through to find untracked, soft, goodness.

At the top of the Apollo, a right upward trending traverse over some slabs gains a saddle from which one can look down toward Tolcat(?) Canyon and I-215.  A short scramble north gains the ridge line from where the the West Slabs are visible.  We contemplated skiing the Zeus Chute (shallow corner on the east end of the Medusa's Face) but the snow pack looked shady and after reading Jared's report, we felt ill equipped to handle any necessary raps or climbing.  Now I have a couple more lines on the tick list.
We down climbed back to the saddle and having booted the upper section of the chute because the snow had become noticeably slabby, we made a couple cuts with good result.  Once down the top section and into the chute proper, we were treated to brilliant powder as we took turns busting up our skin track.


Part II was trying to find an Apollo Burger to go eat an Apollo burger.  Iphones are amazing and we quickly pulled into this joint:

The name for this day came at the suggestion of buddy John and it's the obvious choice. The beauty is, that just like the real Hulk, there are many possible variations on the same theme, thus version 1.0. If more lines are included, it could be like Hulk during his steroid days, in manky conditions - sloppy old Hulk, less lines - adolescent wimpy Hulk.


Here's a pic stolen from Summitpost.org that shows lines 2-7 for the day:
It was a beautiful but almost violently windy day heading up the Pfeiff.
20 second video showing the wicked winds:

Untitled from andy dorais on Vimeo.

From there it was over to Chamonix...eh, Upper Hogum.
Our line of choice was the obvious right trending ramp towards the right side of the picture.
Exploring... 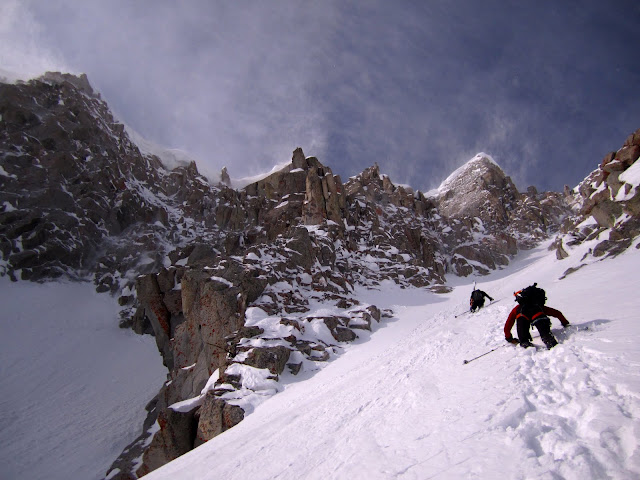 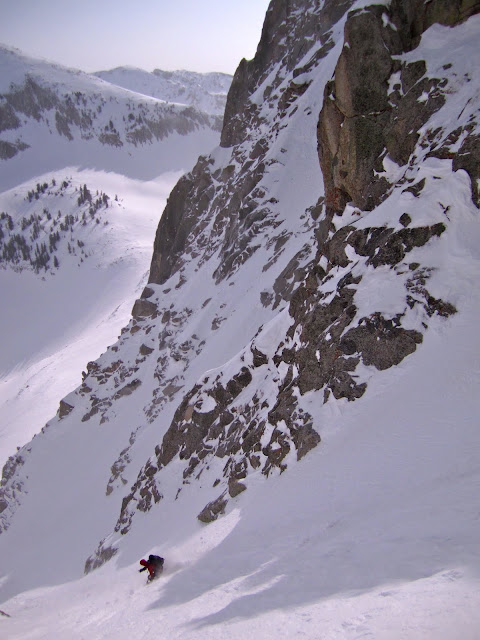 This line held the best snow of the day as spindrift was constantly pouring in from above limiting the wind damage.
With two lines down, we sped over to the Sliver which we used as an up track to Montgomery. At the top of the Sliver, we traversed the ridge until looking down at the notch from which Montgomery begins. This must not be a very standard approach because we were faced with either a gnarly downclimb or a rappel to reach the notch. We rappelled. There, we pulled out a cord and cut off a decent sized cornice guarding the STEEP entrance. That's always satisfying, but we were disappointed to find that the upper 20 feet were nothing but sugar over rock mandating a continuation of our prior rappel to get to actual snow.

Jason tried to find the piton anchors above the big cliff while getting blinded by the unrelenting wind. 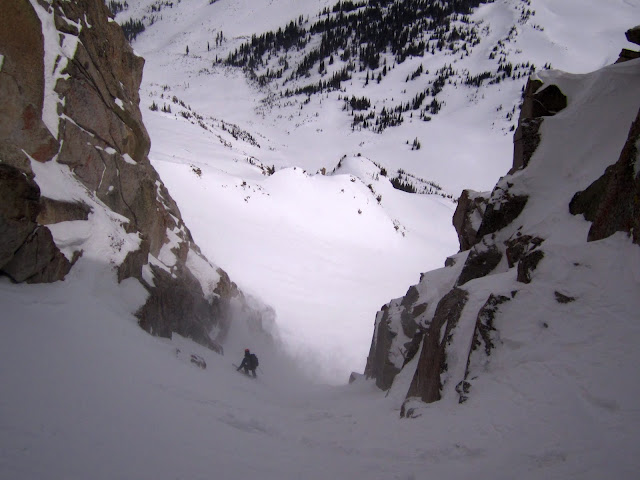 As the trend seems to be, we couldn't find the purported piton anchor so we fixed another pin and nut. It's located approximately 20 feet above the cliff on the skier's left. Pull into the last "island of safety" and dig around a bit to find it. 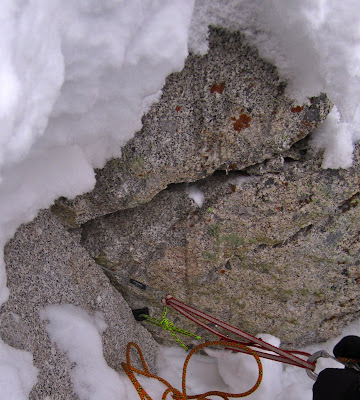 JD rapped first and while disappearing over the edge we asked how big the cliff was and if the rope would reach. His reply was, "It's big enough to kill ya." 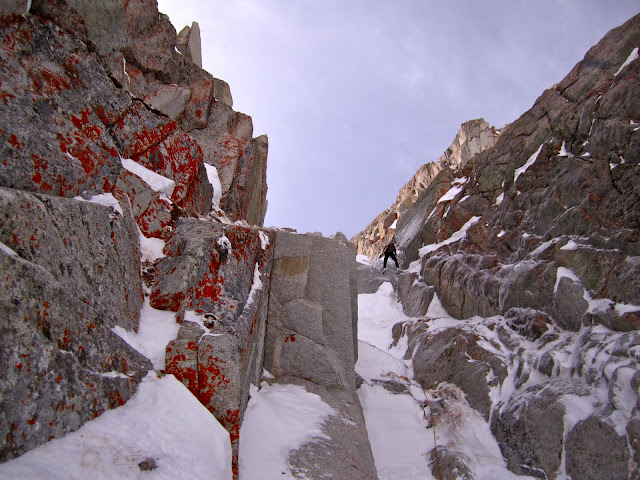 We were using a 60 meter 6mm cord as our rap line, which for ski mountaineering is perfect as it weighs less than half as much as regular rope.

While rappelling, JD banged his knee and then left this trail which we used to hunt him down. 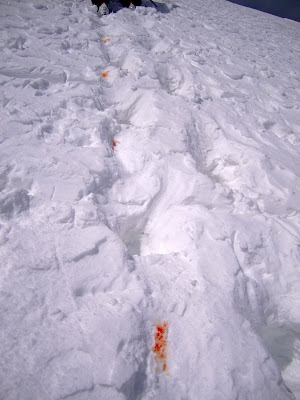 Found him heading back up the Sliver.

For those curious, this is the gear we were running. 167 BD Gurus with Low Techs and 170 Vokl Massaks with Low Tech Lights. Jared was on Trab race skis with Low Techs. These skis are 75 mm, 70 mm, and 65 mm underfoot respectively.  It's my opinion that for big days with climbing/raps/steep skiing, set ups like these will outperform anything else.  Not many people are going to charge on 50+ degree "you fall, you die" terrain, making the "need" for 120 underfoot a mental crutch.  What these set ups do allow is the ability to cover more terrain, faster, and in better overall style.  It's eye opening. 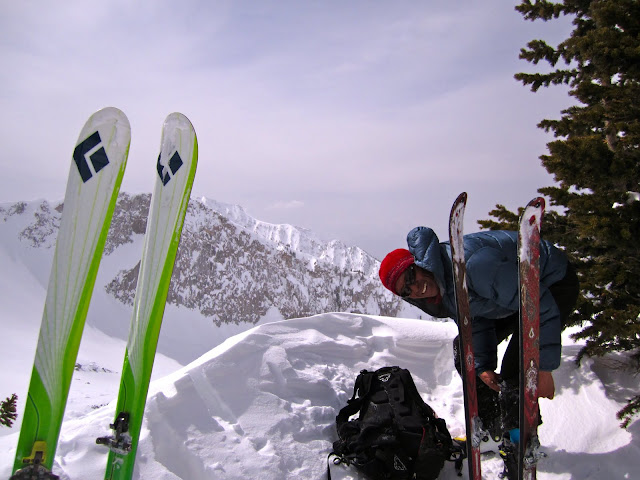 At this point, distressed by the wind, pulling out the camera was becoming tiresome.

Obligatory pic of the Sliver...Jared from the top: 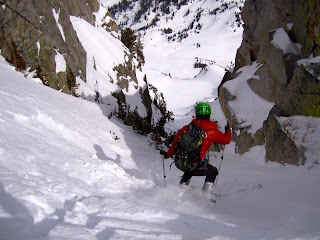 We skied out the meat of the Sliver and down the apron to where we could traverse under the Dresden Face and access the Needle which we used 3 times as an up track to access the Desden, Needle, Coalpit. 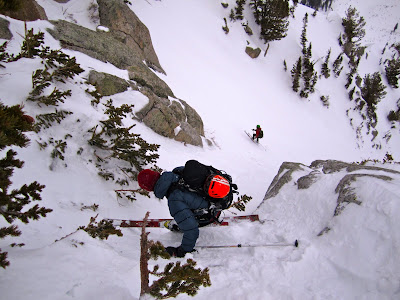 Jared in the Needle: 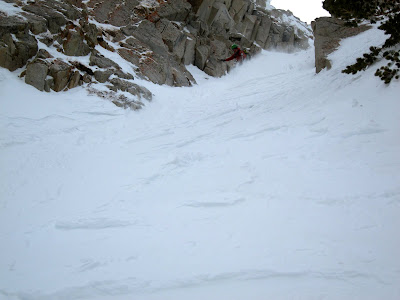 JD on the Coalpit Headwall: 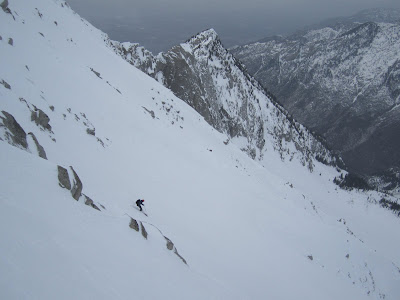 Jared from the top of the Y: 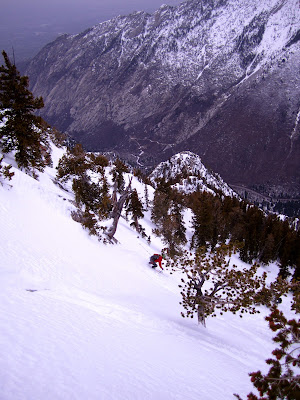 The lower half of the Y was all avy debris...just what we were hopping for after 13 hours on the go. We finally reached the creek and while JD and I carefully stepped across on rocks and branches, Jared, indifferent, just walked right through the water.
We made it to the car before dark throwing down our stuff, happy to be done.
The Hulk Hogum was a great adventure as I got to ski 4 lines I'd never done before. The vertical could have been much greater if we'd skied the aprons to the bottom each time but we were more interested in skiing the couloirs proper with some apron added in as necessary to get where we were going.

Last Saturday was the Wasatch Powder Keg, which is one of the best Rando Races around. I think the participation is what makes this event. Tons of people tour in the Wasatch and this year 140 or so came out to race. Luke Nelson was the run away winner as was expected but little brother JD may have been the surprise of the race, making the podium in third place. Normally that might irk me, but like any proud brother/father (again, I claim that I raised him), I'm glad to see my brother/son have more success than his brother/father. At least I think that's the way it's supposed to go with one's kids.

Anyway, here a few decent videos and a picture from the start that I stole from Matt Turley, who is an awesome photographer (more here). 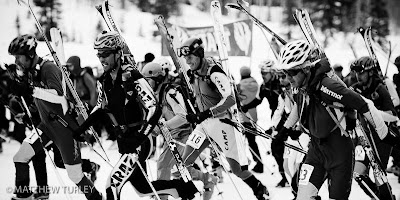 
I know there are tons of fast people out there. Hope to see you next year.
Posted by SLC sherpa at 10:29 PM No comments: