V Notch, Apocalypse, and the Son of Apocalypse Couloirs

After our late start on Wednesday, we knew we needed to get up early and get high to beat the heat and find good snow.  We are lucky to know Zahan Billimoria, who made a couple suggestions, gave us the beta on route finding, and even fed us dinner and welcomed us into his home for a short night's sleep.  Z is one of the nicest guys on the planet and is always psyched, always supportive, and is one of the most inspiring people I've met.  He has a family with two kids a little older than mine and I hope that I can emulate him in more ways than just his ski mountaineering.

We sat by his computer and bounced around ideas for the day.  Eventually, we settled on the following.  The plan was to get up early, cross Phelps Lake in the dark, and ascend to the top of the Apocalypse Couloir.  From there, we would get a look at the V Notch Couloir, perhaps link them both, and then if conditions allowed, add on the Son of Apocalypse.  Sometimes, everything goes exactly according to one's whimsical plans.

We broke trail the entire day, didn't see a single soul, and skied steep but stable powder until Jason declared, "Well, I think we've gotten our Teton fix for a bit."  That usually means about a day but at least we were content. 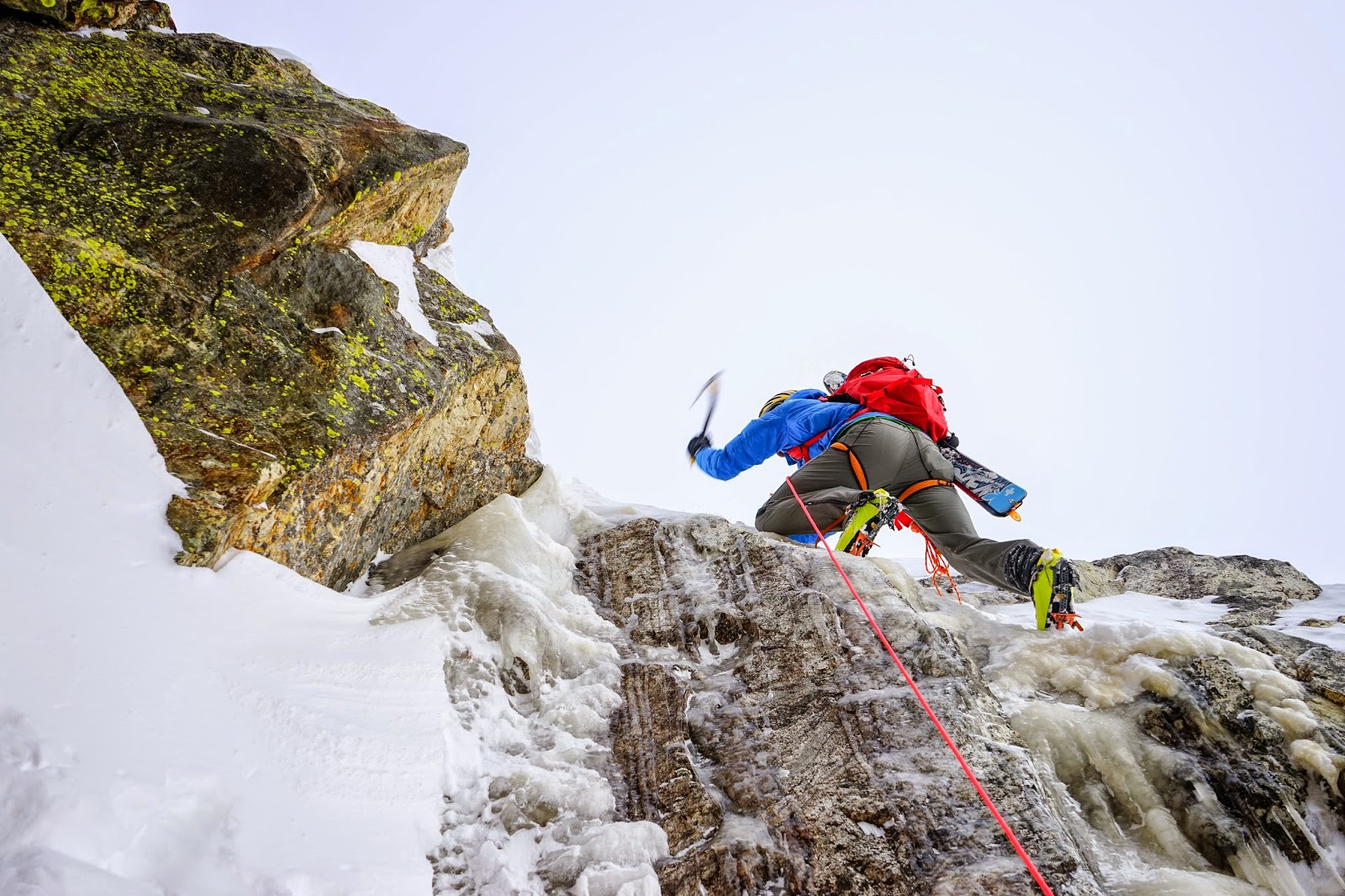 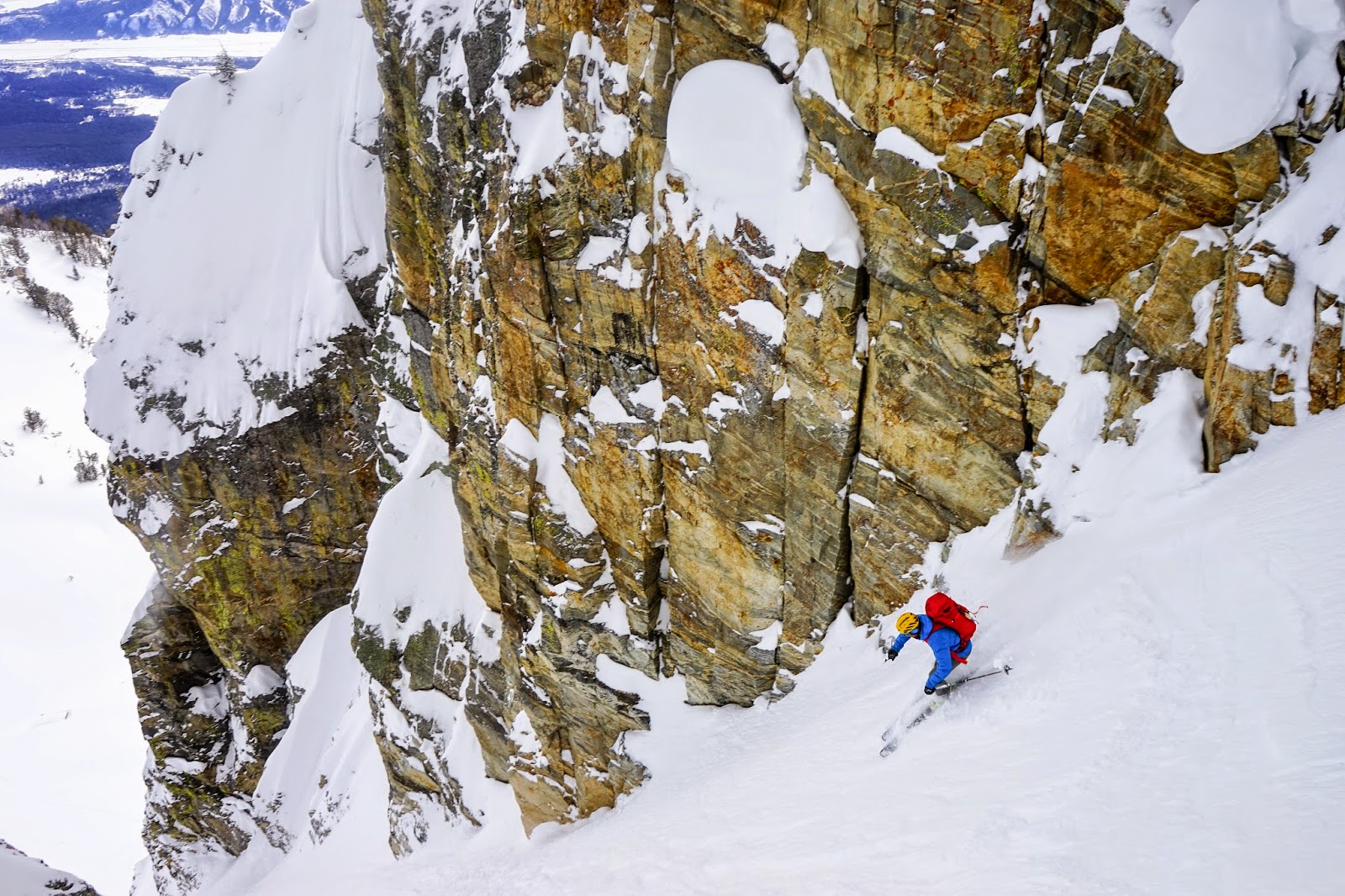 We skinned back up to the top of the Apocalypse and after some rooting around, found the slings at the base of a large tree.  We knew there would be three rappels but it still seems odd that this line doesn't fill in to the top.  I suppose the prevailing winds prevent it, but DAMN would that be nice.

For the first rap, the rope was handy.  For the second two, it was only useful to lower over a couple small rock steps that interrupted the steep snow.  This was nice as our rope was just a little short for the second rap (we were using one 60).

Once in the cave, we donned skis and I belayed Jason as he ski cut the hell out of the upper Apocalypse.  I then skied to his position and gave it my best shot while he belayed.  Satisfied, we laughed our way down this insanely classic Teton chute. 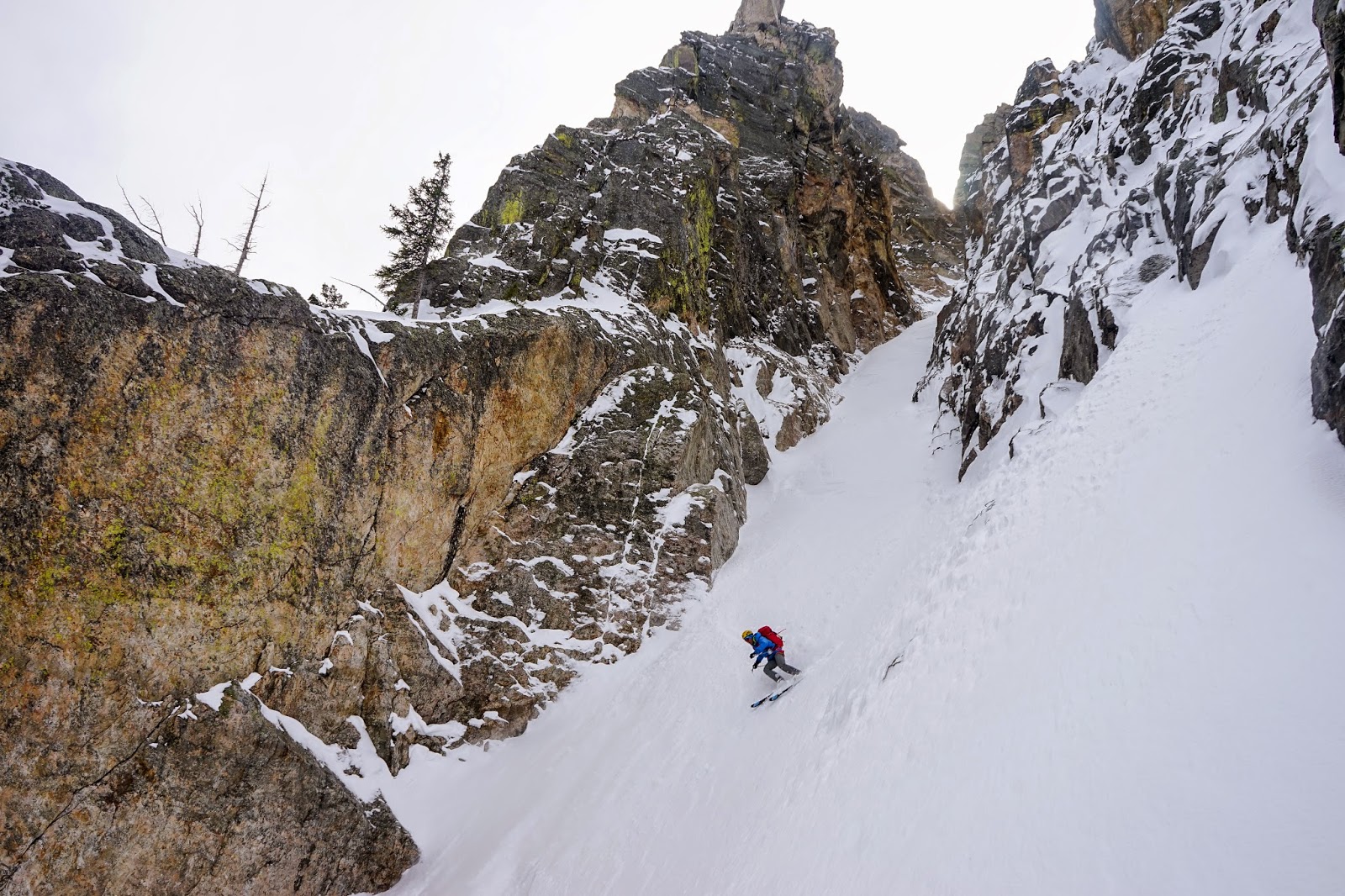 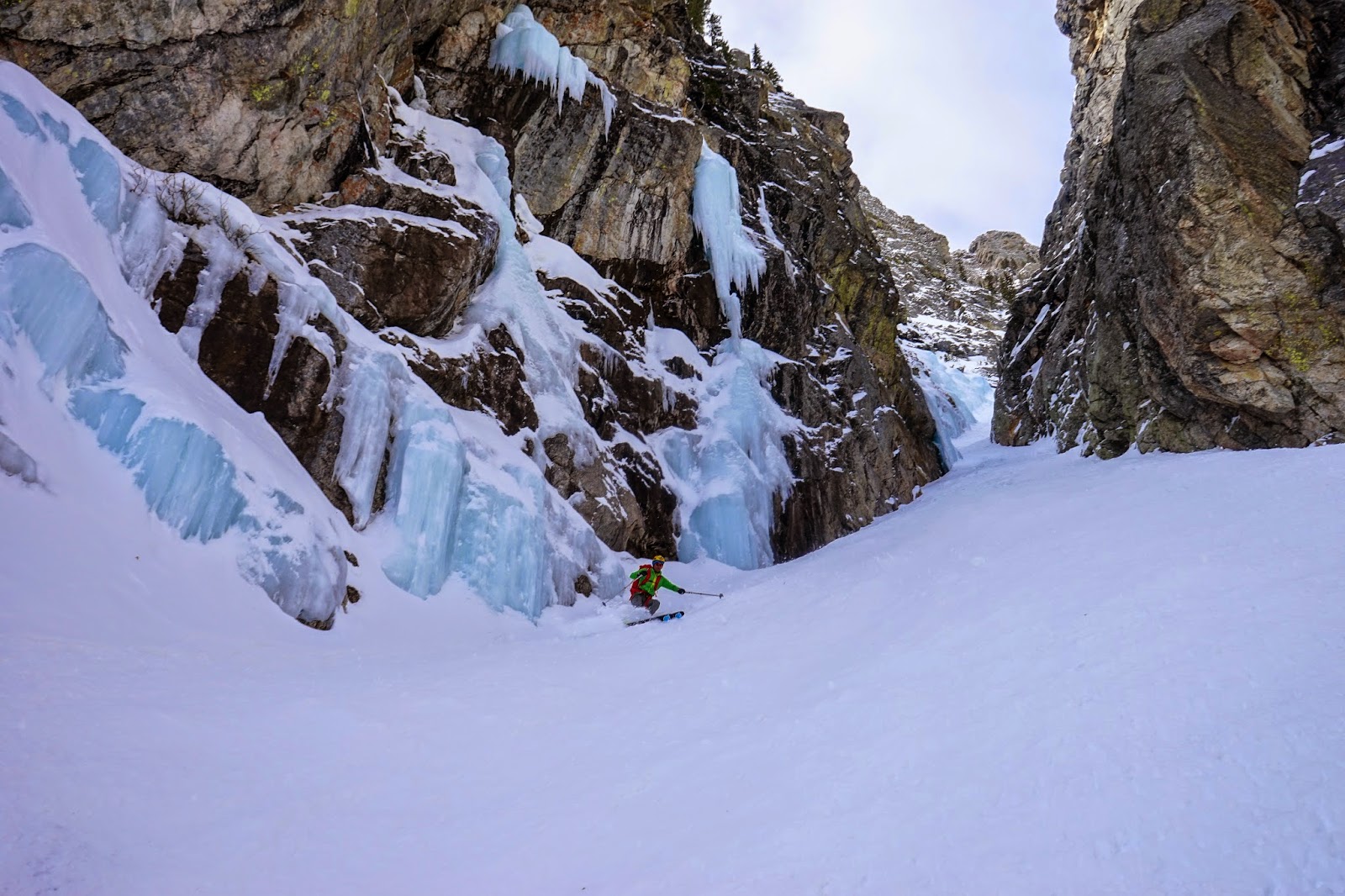 Pleased with the day but not ready to be done, we skied to the apron of the Son of Apocalypse to get a look.  Our main concern was the sun and the danger involved in climbing a chute with some big terrain above us.  Fortunately, the wind picked up and the skies were becoming more overcast so we decided to start up with the pact to turn around at the first sign of instability.

The only instability we found was in ourselves.  The benefit of being alone in the mountains is paid for by trail breaking and this seemed to be taking a toll.  With heavy packs and deep snow, I resigned myself to just be uncomfortable.  We thought it would take an hour to boot the chute but the truth was closer to two.

As we topped out I got a text from Z that read, "How are we doing boyz?"

About to drop into the Son of Apocalypse after two great lines already, the answer was most definitely, "Psyched!" 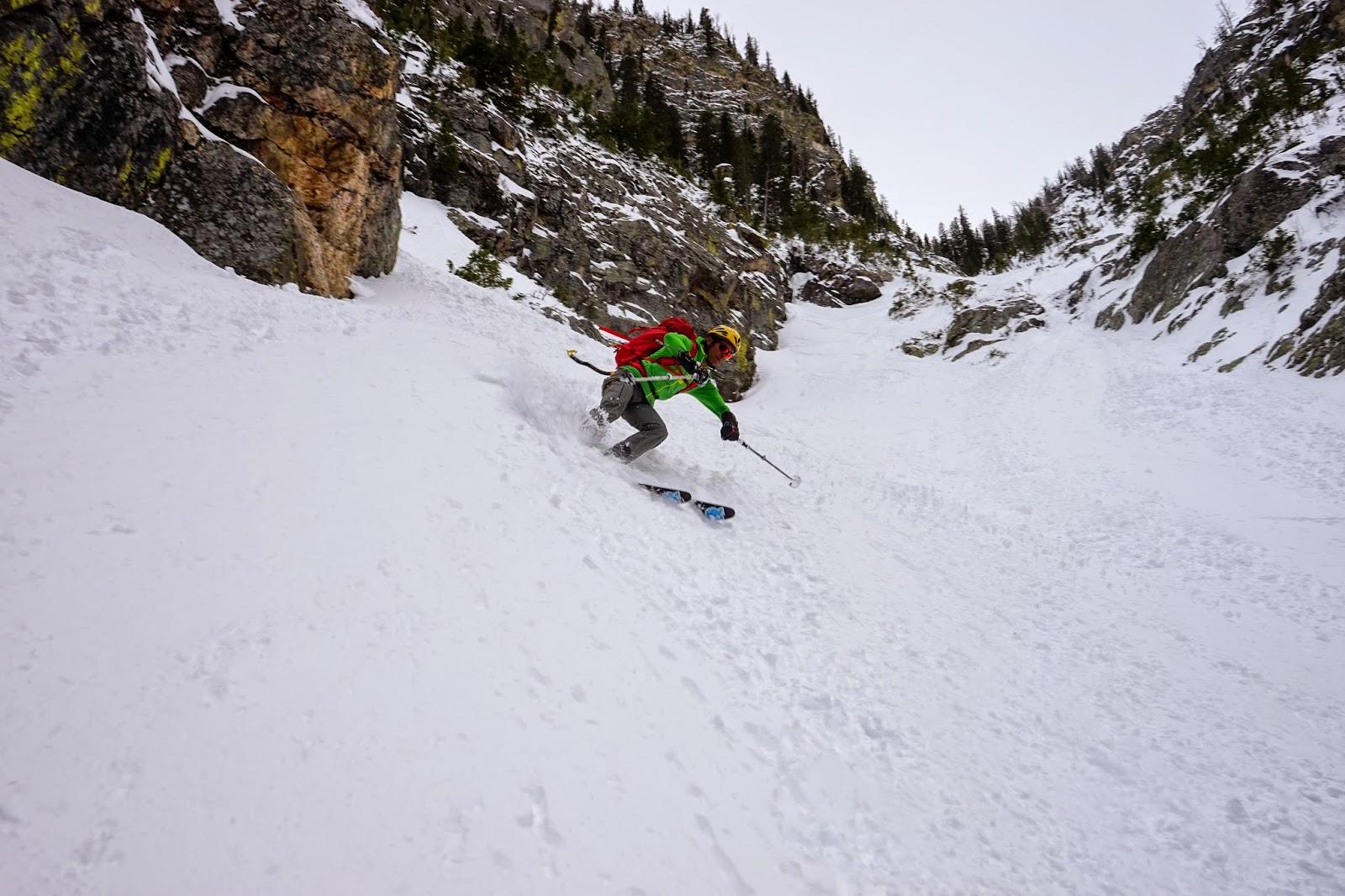 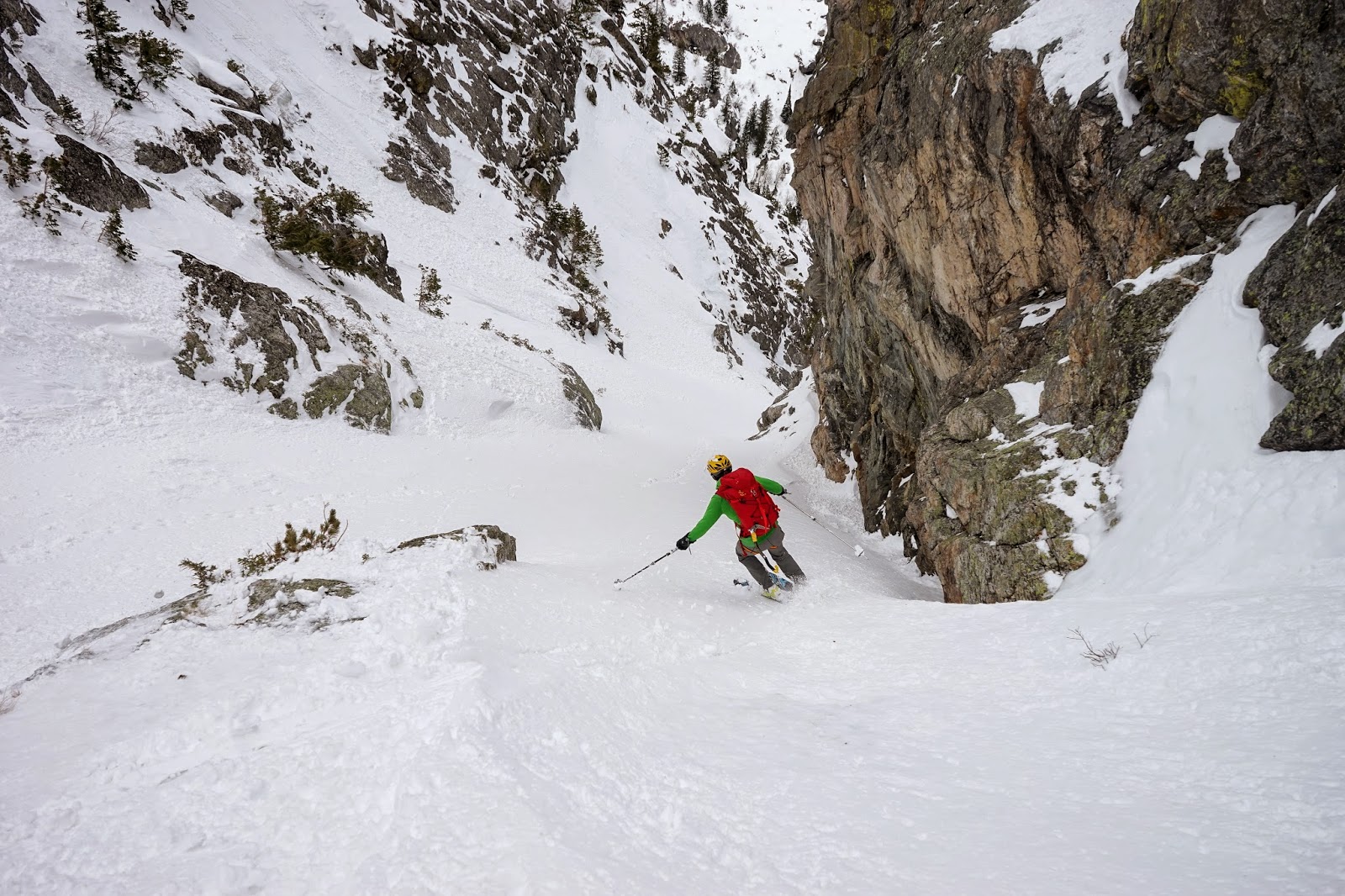 Jason and I took off on another mad dash to the Tetons to see if we could hold onto winter just a little longer.  We left SLC on Wednesday at 5:30 in the morning, hoping to get to the park and find cold powder to ski till sunset.  With a forecast for temps in the 20s at the mid elevations and a chance for snow and clouds, we thought we were going nail this one.  We couldn't have been more wrong.

Nate Brown was kind enough to join for the afternoon and it was good to catch up with an old friend.
In the end, we skinned and skated about 15 miles to ski 1400 vert on the shoulder of Mount St. John.  The sun was out in full force and the lower elevations were too affected to climb through safely.  At least we got to ski an old burn that I'd noticed while running there some years ago.  And, the Jenny Lake crossing was also a new experience. 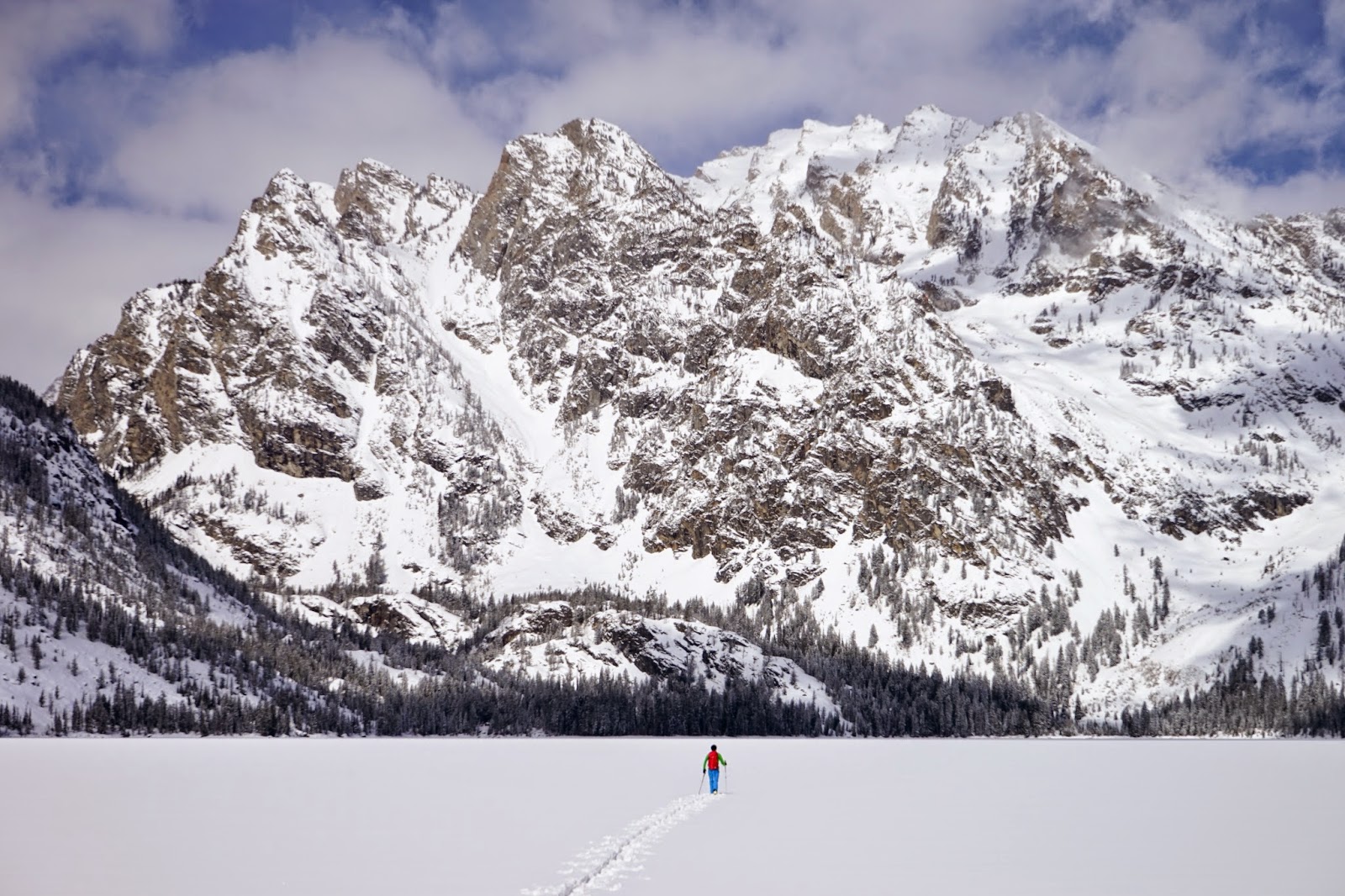 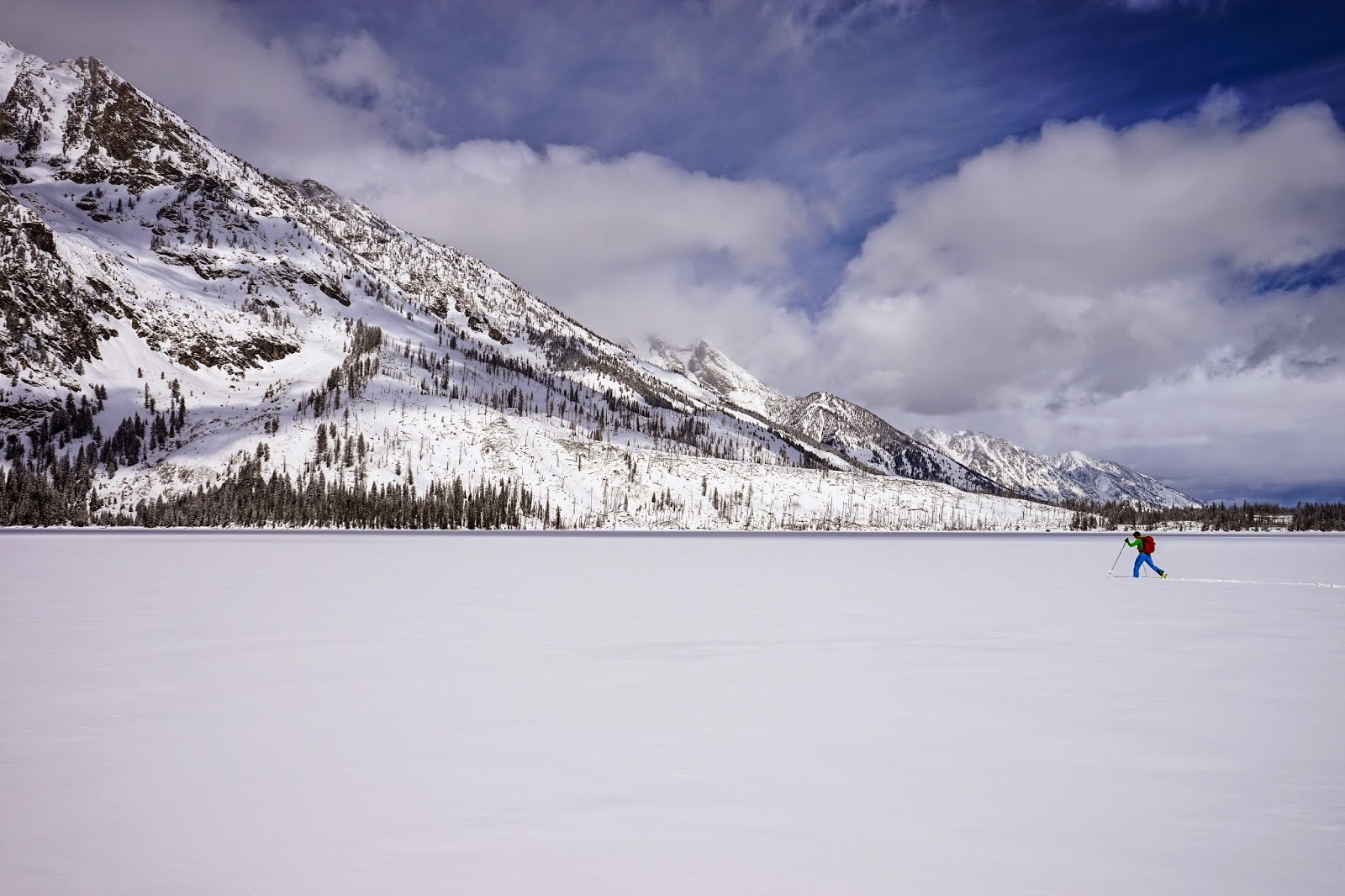 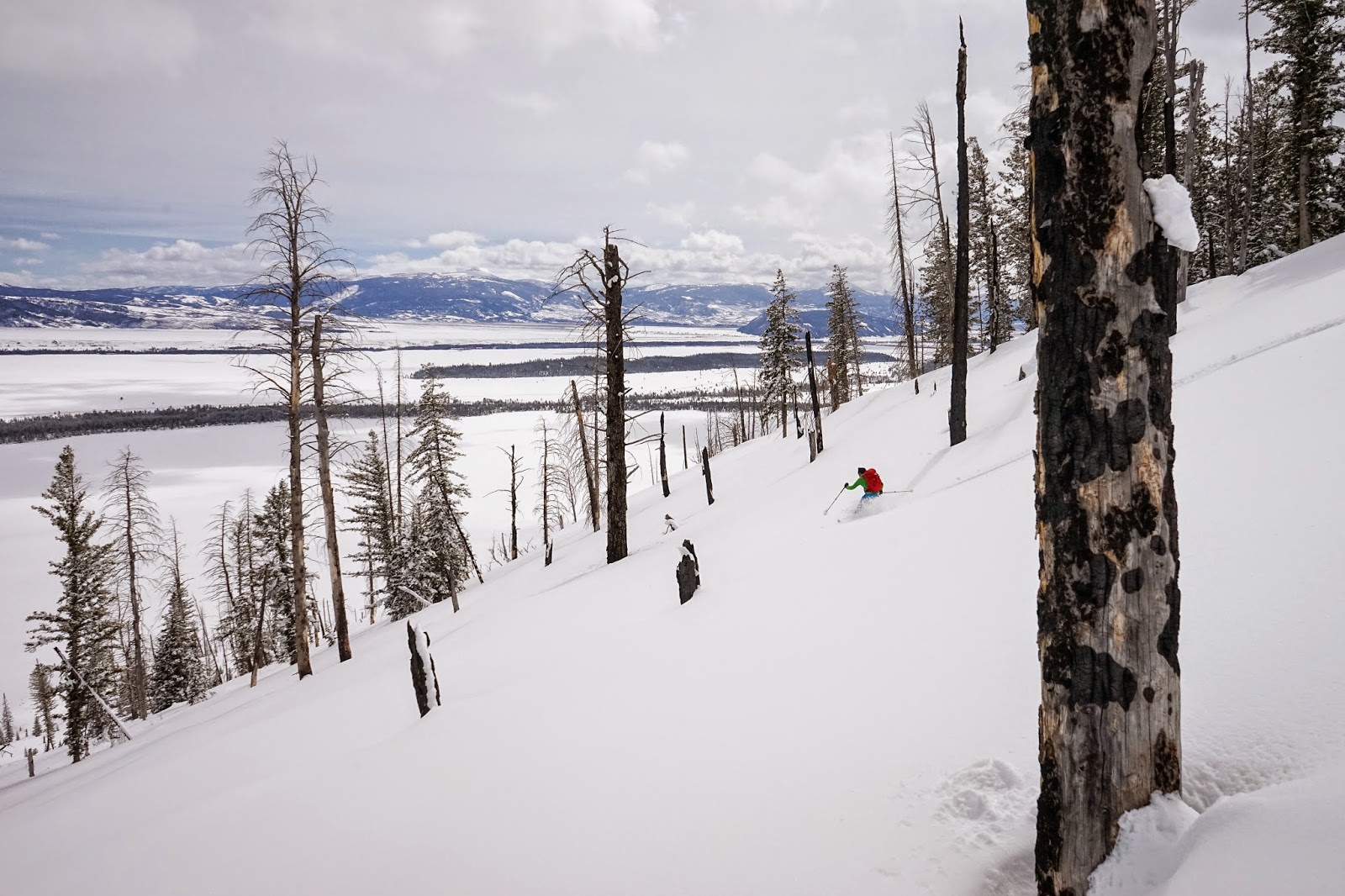 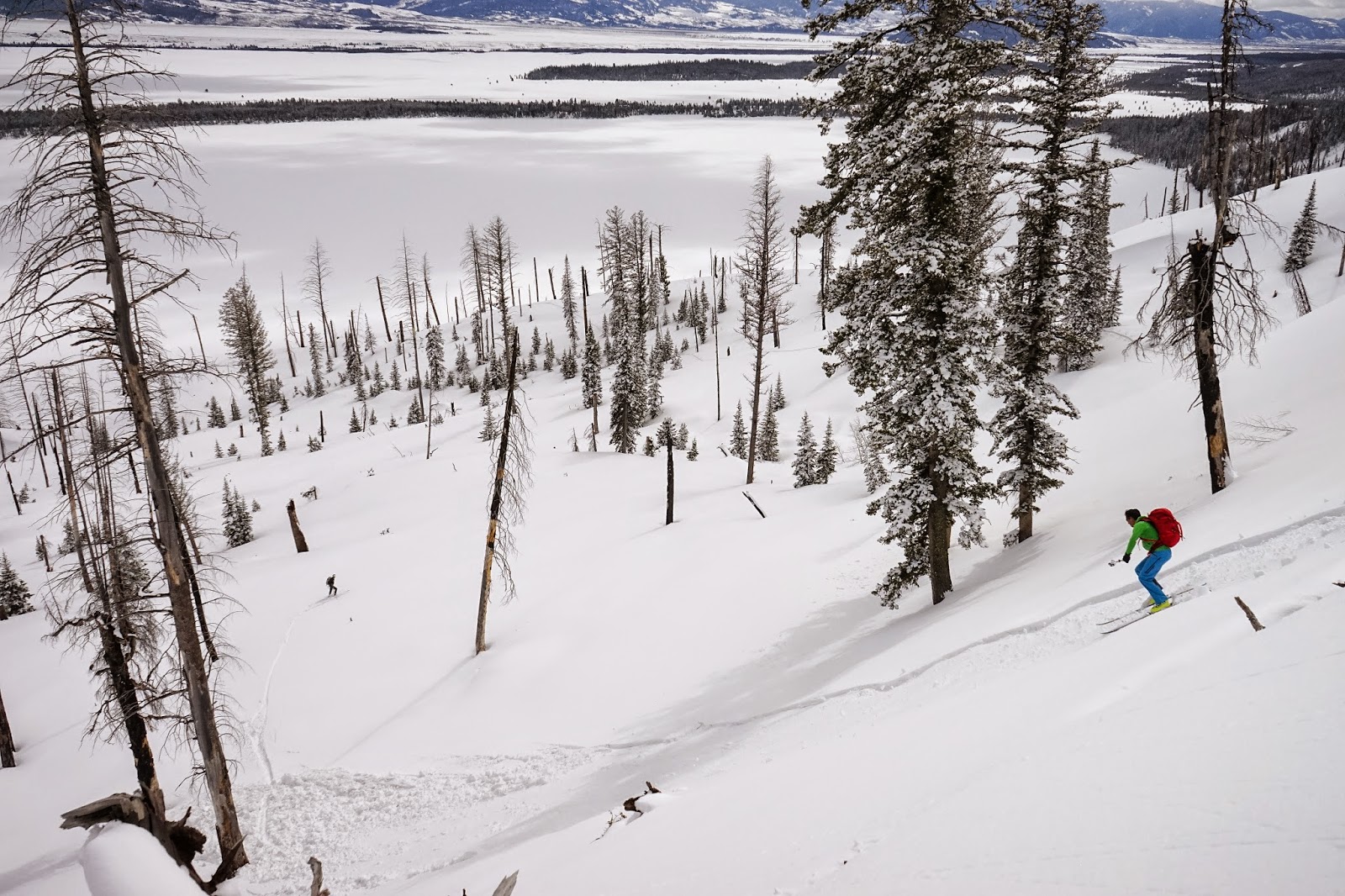 St. John Wet Slides from andy dorais on Vimeo.
Posted by SLC sherpa at 3:28 AM No comments:

I missed the Powder Keg but I heard the skiing was horrible and almost dangerous.  I think people had a good time anyway but I'm pretty sure that Jason and I found better snow the day before on Spanish Fork Peak.  Below is another shaky budget movie but at least it should show some nice dense powder.

So many folks have been complaining about the snow this year.  I keep talking to people who say that they haven't been skiing because the snow sucks.  Well, I'm apt to agree with the general sentiment of despair that we are facing an impending drought and all the implications that holds for a city in the desert but I'm gonna have to disagree that the skiing was bad this winter.

Skiing is always rad.  I just hope there's always enough "bad" snow to keep doing it.  And, maybe all those bad attitudes will just lead to more of the bad snow for me!

We got home from our Trifecta outing around 8PM on Wednesday evening.  That night, after being awake for some 40 hours (minus the little naps on the mountain), I had the darkest, deepest sleep in recent memory.  No child's cry was going to wake me.

Refreshed, I awoke day dreaming about going back to the Tetons.  I watched the weather all day and realized that the forecast storm never really materialized.  One pleasant inch was all that fell and I began to hatch a plan to go back...that very night.  My in-laws are in town and I had a commitment on Saturday so to return, it would have to be done alpine style as a day trip.  Fortunately, my brother isn't very smart and he agreed to go along.

Around 10 PM we finalized our plan.  We would leave SLC at 3:30 in the morning, rally to the park, climb the South Teton (which we knew would be relatively fast having just done it a couple days before), and then ski the Amora Vida Couloir.  We hoped to time the descent to find soft conditions with the predicted warm noon day sun.  We also hoped to be at the car at 2 PM and home for dinner by 6:30.

I've been eyeing this line for some time now and got a good glimpse of it while skiing Mount Wister this January.  With gear still stinky and wet from the previous trip, I packed up and tried to sleep for a few hours.

The drive went smoothly as we listened to a few podcasts of "This American Life" and we pulled into the Taggert lot at 8:30.  Gear vomited forth from Jason's truck and I had the damnedest time trying to adjust my crampons without any tools.  I always plan to pack at home but sometimes I can't tell which is more chaotic.

At 9AM we were off, a bit late but not worried as the snowpack was frozen solid.  However, by the time we crossed the lake we were dripping sweat and the higher angle slopes were already softening. This increased the tempo and we made good time to the Meadows.   Unfortunately, we were both developing some hot spots that turned angry in a hurry.  I normally don't get blisters and chalked it up to being in boots too much over the past few days.  I guess that's a good problem to have.

Our pace slowed dramatically as a fast cadence was more painful to the feet.  We bumbled along with growing blisters and managed to summit just under 3:30 which was as planned.  On top, it was another perfect day.  Warm, still, and crystal clear, we could have lounged around forever.   But, a slight tension was present as the south side of the South Teton seems to fall away into space and we had a little navigating to do and felt pressured by the sun.

Jason led out from the summit and immediately was cliffed out.  He had gone too far east.  I skied due south and just past the ultra aesthetic and ultra gnarly Southeast Couloir, found a sneaky ramp to connect to the large hanging snow field above the entrance to the Amora Vida.   Tension gone, we enjoyed an inch of hot powder over the extremely firm surface underneath.  Our timing seemed perfect and we took turns laughing our way down this incredible line.

The exit out Avalanche Canyon was still frozen in the shade and we rocketed out and across the lake. At the car just after 2PM, all that remained was the very familiar drive home.

The Amora Vida is now one of my all time favorite descents and to have pulled it off as a day trip, sneaking away from our families and returning to be with them as if we had just been at work for the day feels like we just stole the world. 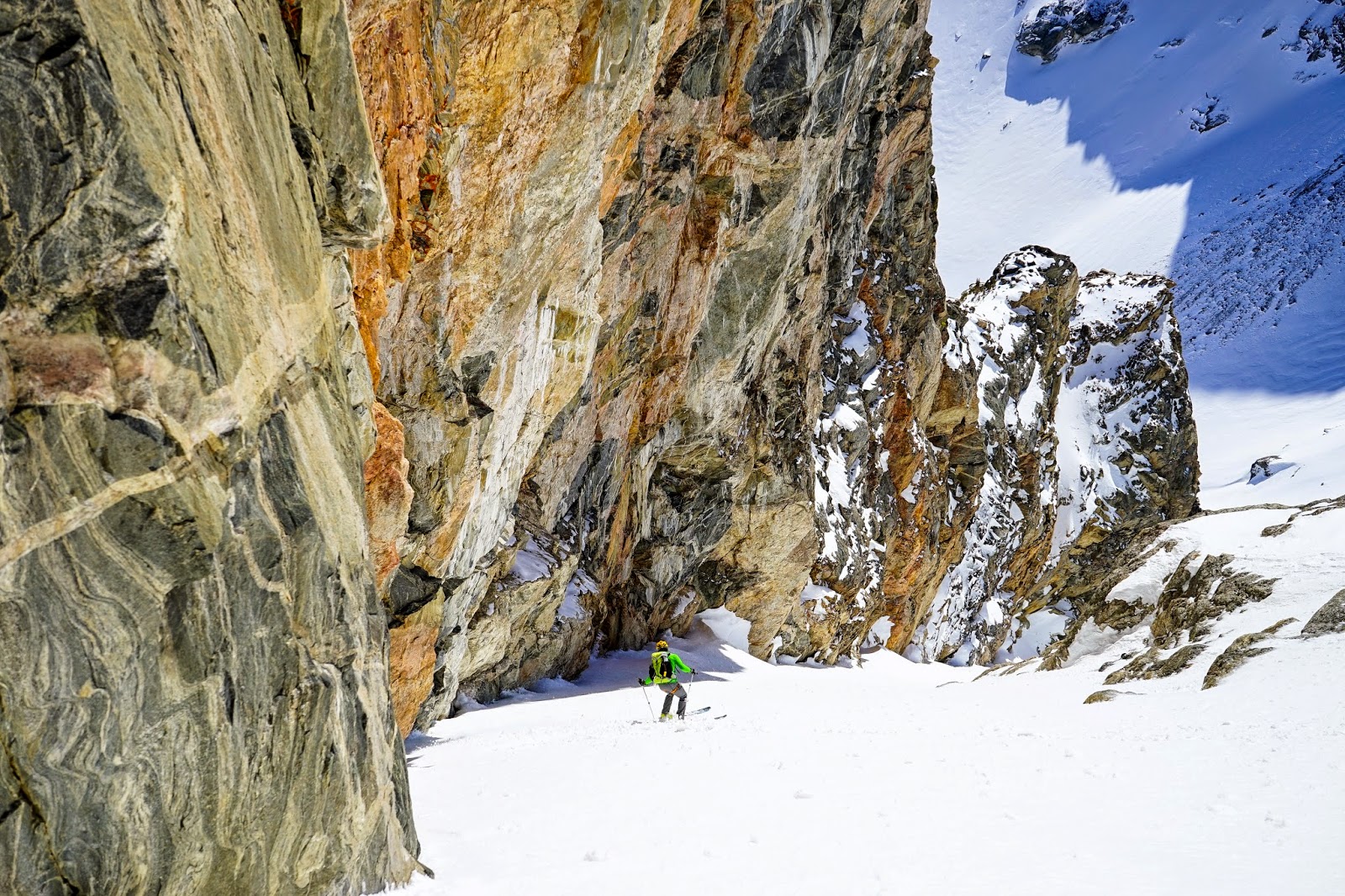 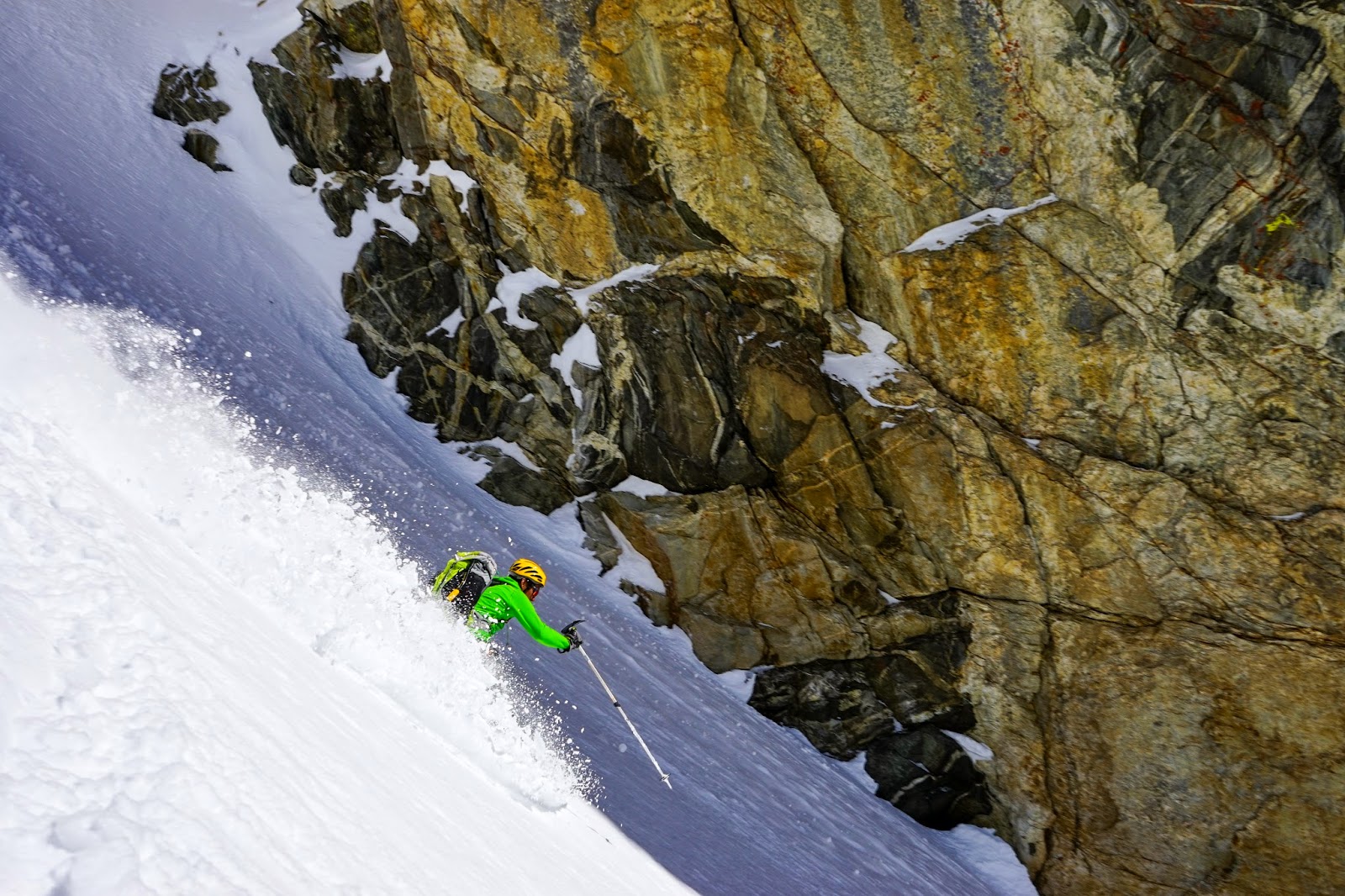