After returning home from some racing and adventuring in the Alps, I've been working and spending time with the family.  Today I returned to the mountains after a week off and it felt so good.  A sedentary life does not agree with me.

Big Lars said he was happy to have us back and it's good to be back.  I've missed little my boys, both Lars and Teague, and it has been fun to play with them this week.  Today though, it was good to get out with my other boys, big Lars and big Teague for a quick road side adventure.

We knew there is a full on corn cycle occurring right now so we got an appropriate start (8 AM) and started up Tanner's.  I was startled by the lack of snow as the first 10 minutes from the car were essentially on dirt.  Soon we were skinning the frozen gully with patches of debris but ultimately decided booting was faster as the angle kicked up.

None of us had previously skied the South Couloir from the summit of Dromedary Peak but knew it was supposed to have a little cliff band protecting its entrance.  We poked around a bit, scrambled a bit, and found ourselves looking right up towards the summit.  We were climbing firm snow but very soon it would be in perfect condition.

We lounged on the summit, snapped some photos, and randomly decided that our feast was probably ready.  The upper chute was almost too cooked, while the main Tanner's bowl was perfect.  Fortunately, this spring skiing nonsense is supposed to come to an end this weekend with a small storm followed by perhaps a more long term change in the weather. 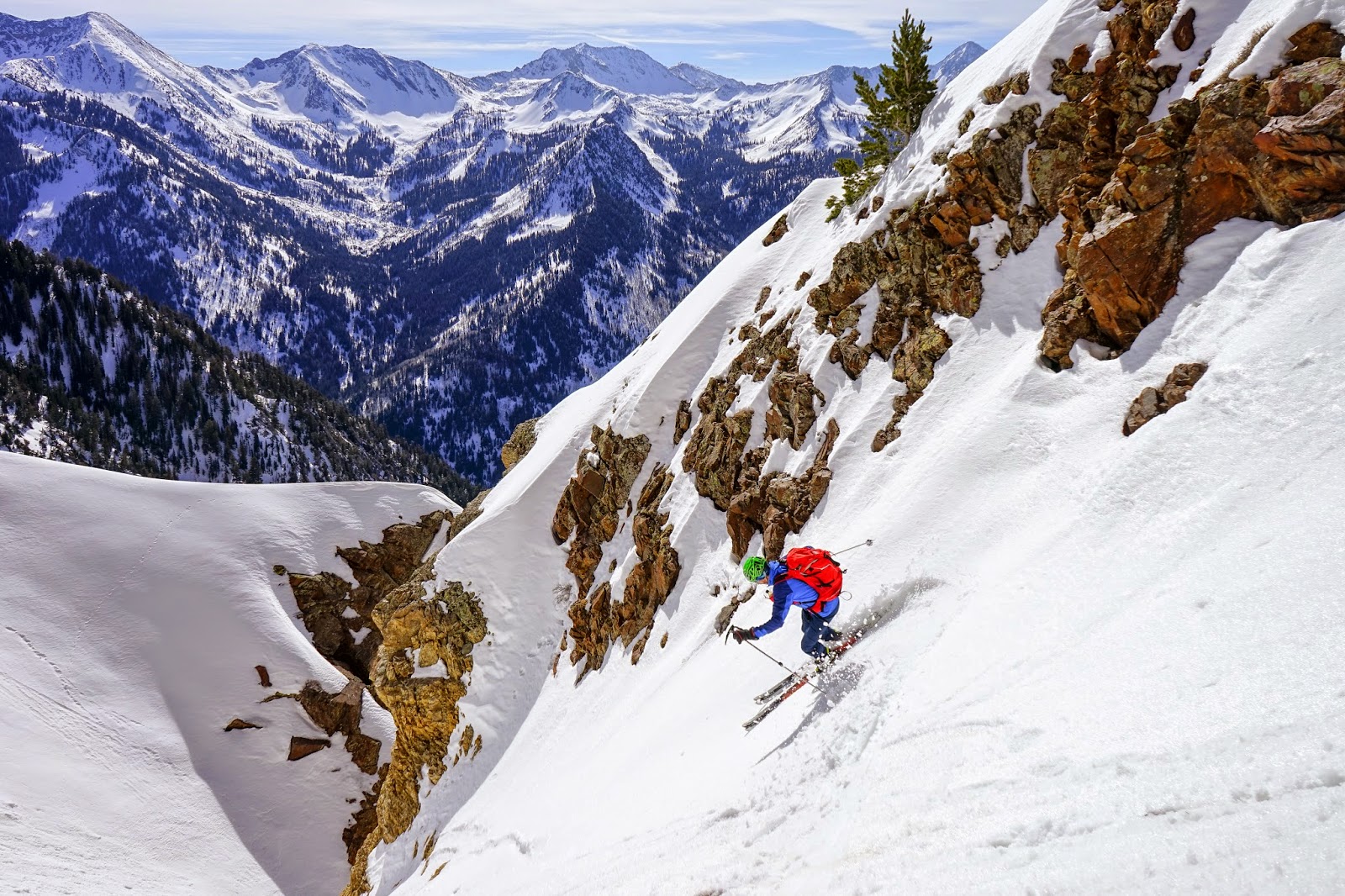 Posted by SLC sherpa at 4:22 PM No comments:

Racing the World and the Sun

The team relay was held Friday morning and was the concluding race at this year’s ski mountaineering world championships.  The format is very similar to the sprint, except rather than one climb, there are two.  Each racer has to tag the next before they are allowed to cross the start line.  I was leading off, followed by Colin Cares, Teague Holmes, and Billy Laird.  My hope was to try and keep us close during my leg and that I did, for about two minutes.

I started well, felt strong, and passed a few of the better teams.  Rather suddenly, I no longer felt well or strong and was blowing up before the top of the first climb.  Whatever, I tried.  The other guys didn’t fare much better and we ended up in our seeded position of tenth out of twelve countries participating.  There is definitely room for improvement.

Directly from racing the world, we decided to race the sun.  Jason had secured a rental car that morning and was waiting with skis packed for a quick trip to the Chamonix Valley.  We were hoping to ski something big but weren’t leaving the provincial town of Champsec, near Verbier, until noon.

Arriving in Argentiere after one, we rushed to gear up in the parking lot.  Harnesses, an ice tool, a couple 30 meter ropes, and crampons of various quality were thrown together and we headed up on the tram.  By this point, on top of the Grand Montets resort, we looked out over the Argentiere Glacier and tried to decide what to do.  It was 2:30 and whatever it was, we had to hurry.

We skied like mad down to the glacier, startling others out on a more leisurely paced day.  Skinning up under the big north faces, everyone’s heads were on a swivel taking it all in.  I’d done the same two days before but there wasn’t a lot of time to look around and play tourist.

We made a decision and hoped to pass the hut, climb the Amethystes Glacier to the chute I wanted to ski a few days before, the Couloir en Y on the Aiguille d’Argentiere.  I wanted to stand on the top of something and this seemed like a reasonable plan, except that we were starting about four hours too late.

The guys had tired legs from a week of racing but everyone worked hard to move efficiently.  It was now four in the afternoon and standing at the foot of the couloir, we were startled by what appeared to be spindrift coursing through a twenty meter choke of ice and rock guarding the couloir proper.  We poked our heads into the fire and Teague ended up with a bloody lip.

Regrouping, it seemed the debris was likely from a skier making their way down but with the recent warm temps we couldn’t be certain it wasn’t spontaneous.  Not giving a damn, Scott Simmons went for it in flimsy aluminum crampons.  Jason joined and they spotted a skier up high sending down the icy debris.

We waited a bit longer until he was at the rap station before joining JD and Scott.  From there, we pressed upward in a firm boot track hoping to beat the sun and the impending freeze.  We had discussed a soft turn around time of five PM.  I suggested 5:30 and told the guys that as long as we made it to the hut by dark I could get us out since the exit was very straightforward and I’d done it two days before.  They were understandably skeptical given the “look” of the terrain.

The couloir wasn’t too steep but it was steep enough.  The conditions weren’t too firm but in the shade, the surface was rapidly locking up.  Around twelve thousand feet, Teague suggested we turn around before the conditions became unnecessarily dangerous.  Tom agreed.  I tried to play devil’s advocate but couldn’t.  They were right and it was time.  I’d lost my second race of the day but declared victory anyway.

We skied increasingly firm snow down to the rap station, side slipping or down booting the final ten feet.  A thirty meter rappel later and we were joyously gang skiing thousands of feet in the waning light.  With ears popping from the rapid descent we clinked poles and high fived as we crammed five stinky guys back into a small car already full of gear.

Earlier that afternoon as we skied fast onto the glacier, away from the tram, I felt amazement at the collective psych of our group.  We were in a hurry to get somewhere, not knowing where, but going anyway.  Really, that "somewhere" was never an actual place.  It was the excitement of adventure, chasing my friends and the sun through wild mountains.  Those final hours of daylight were the best of my trip.

I can't thank the guys enough for waiting for me to race that morning and then joining for the fun. 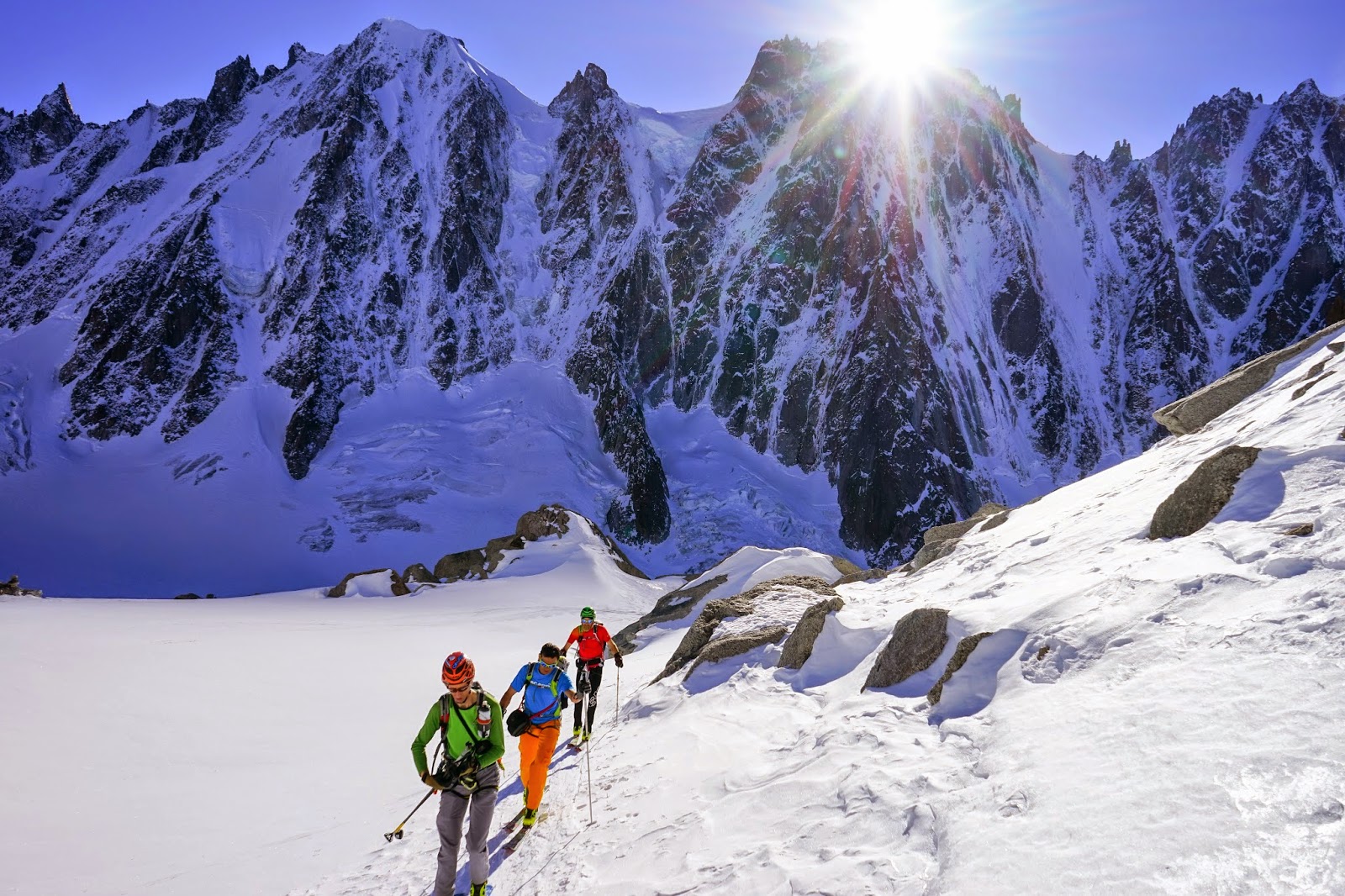 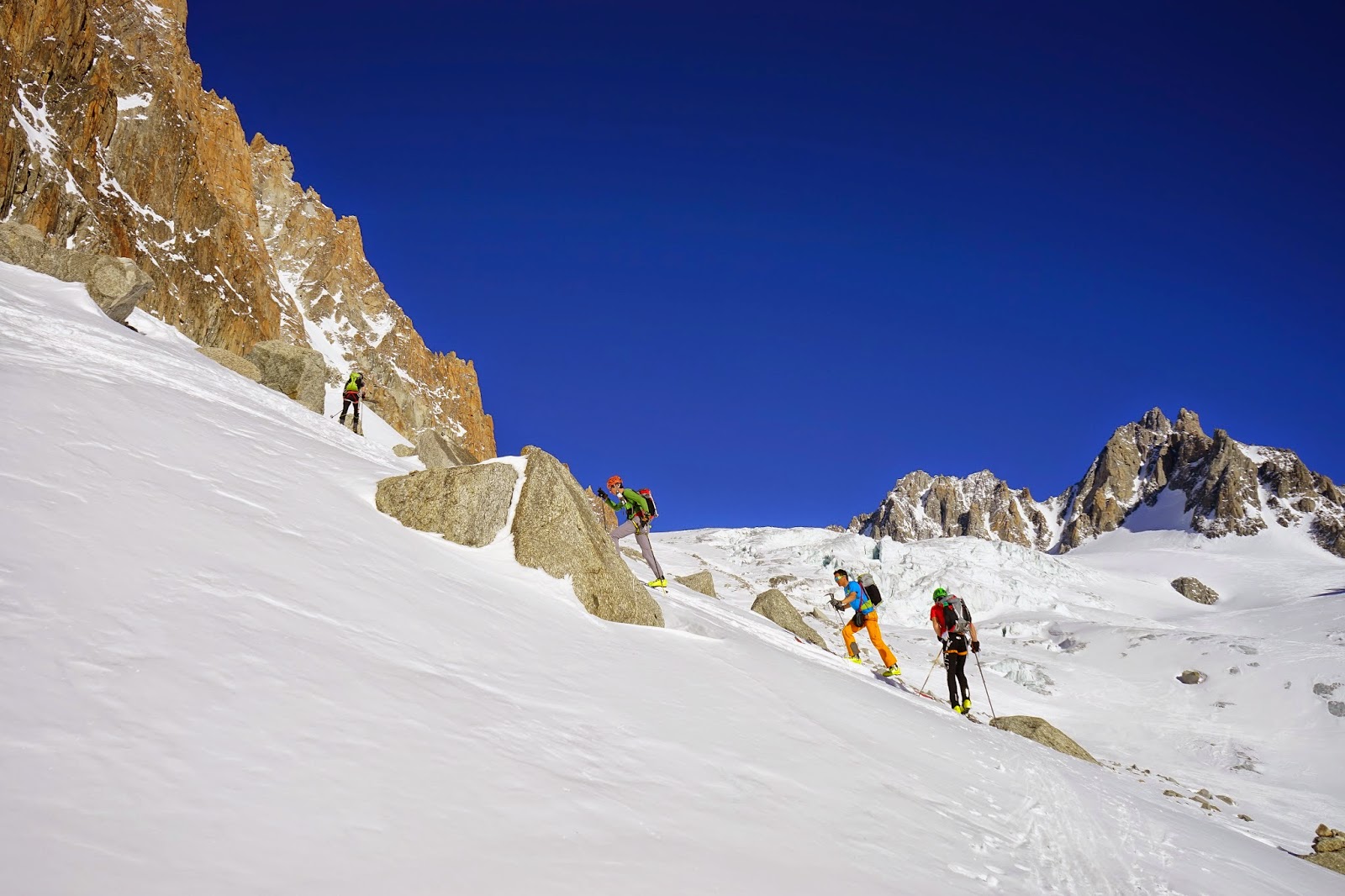 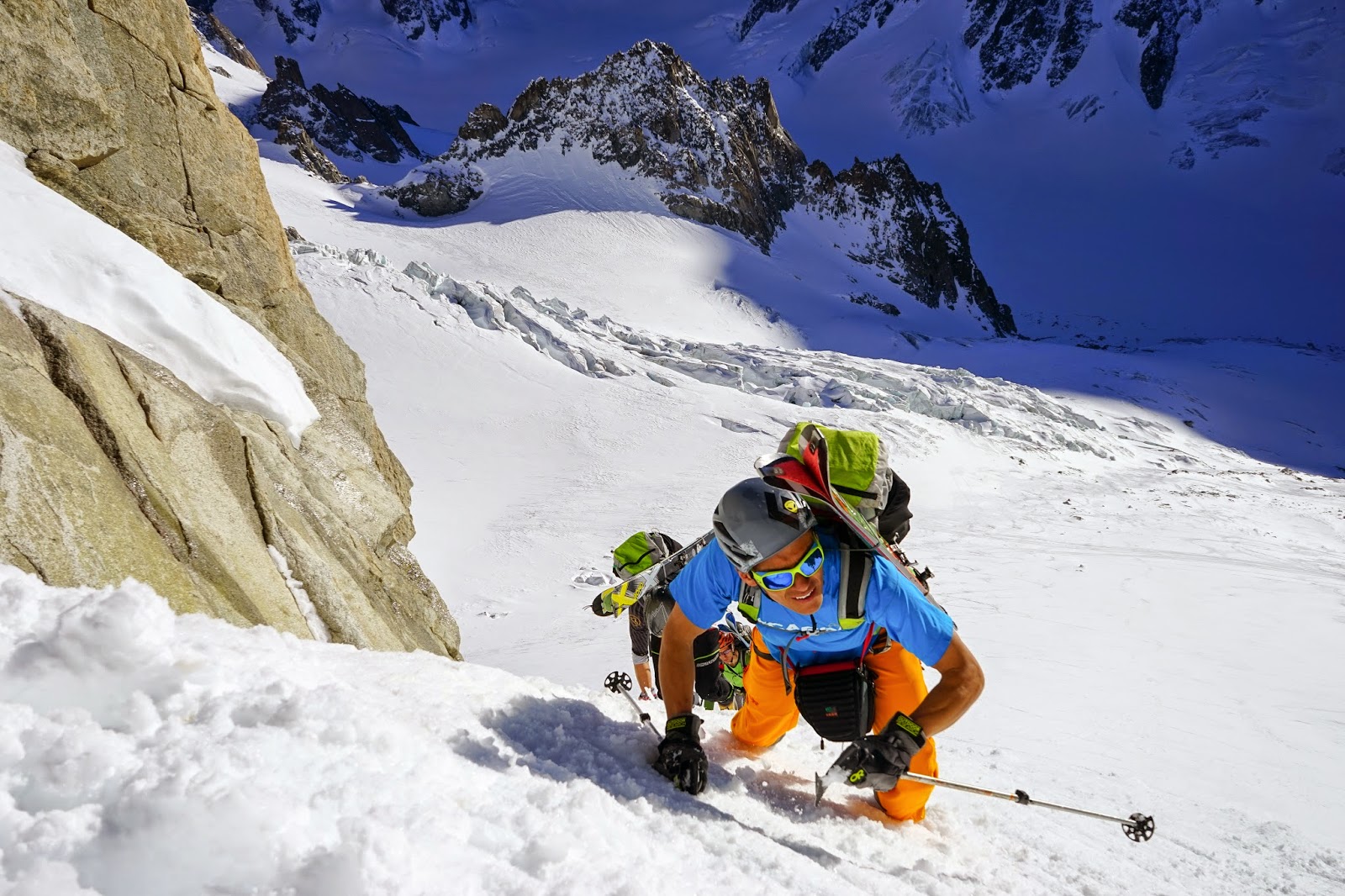 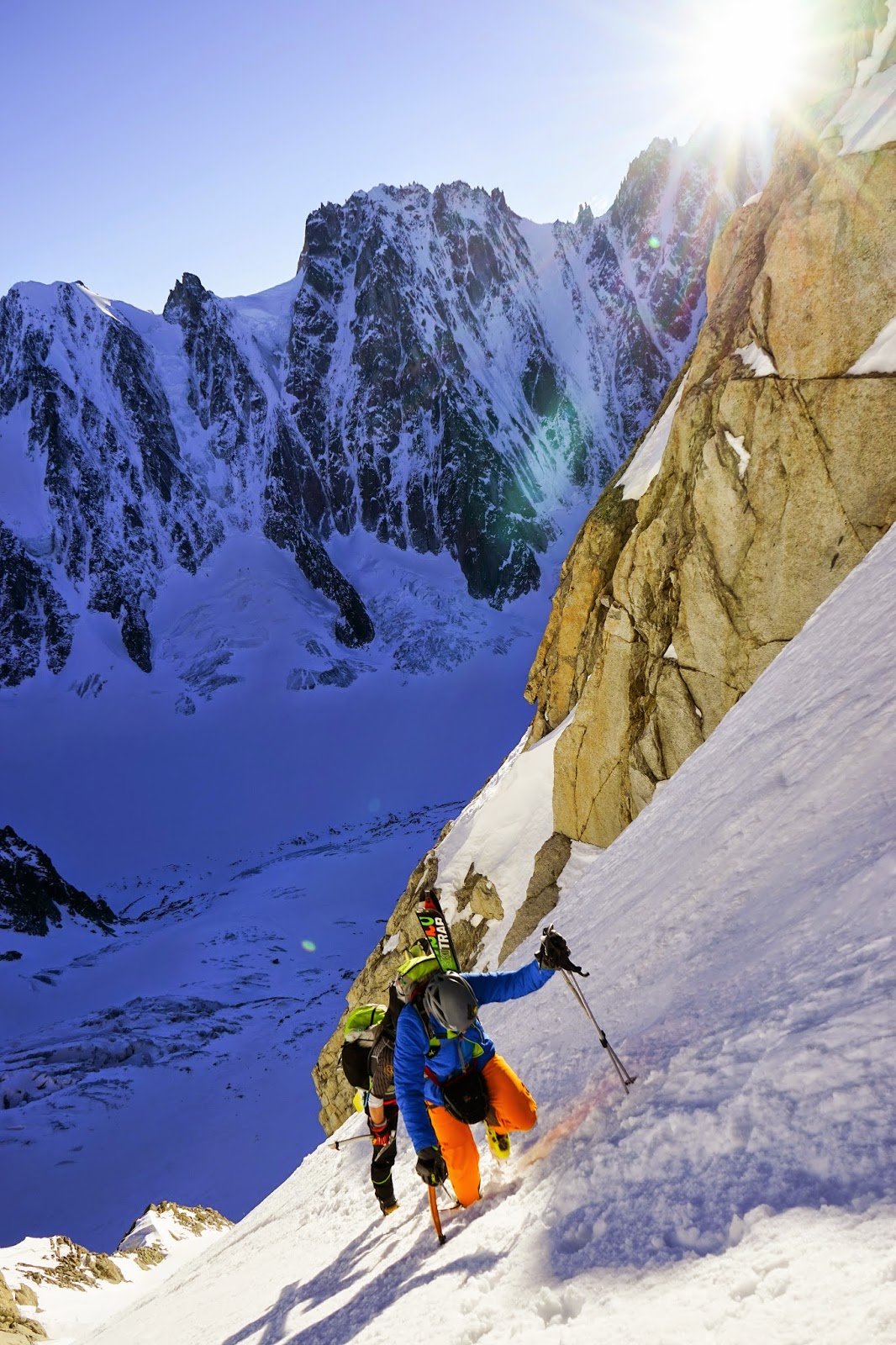 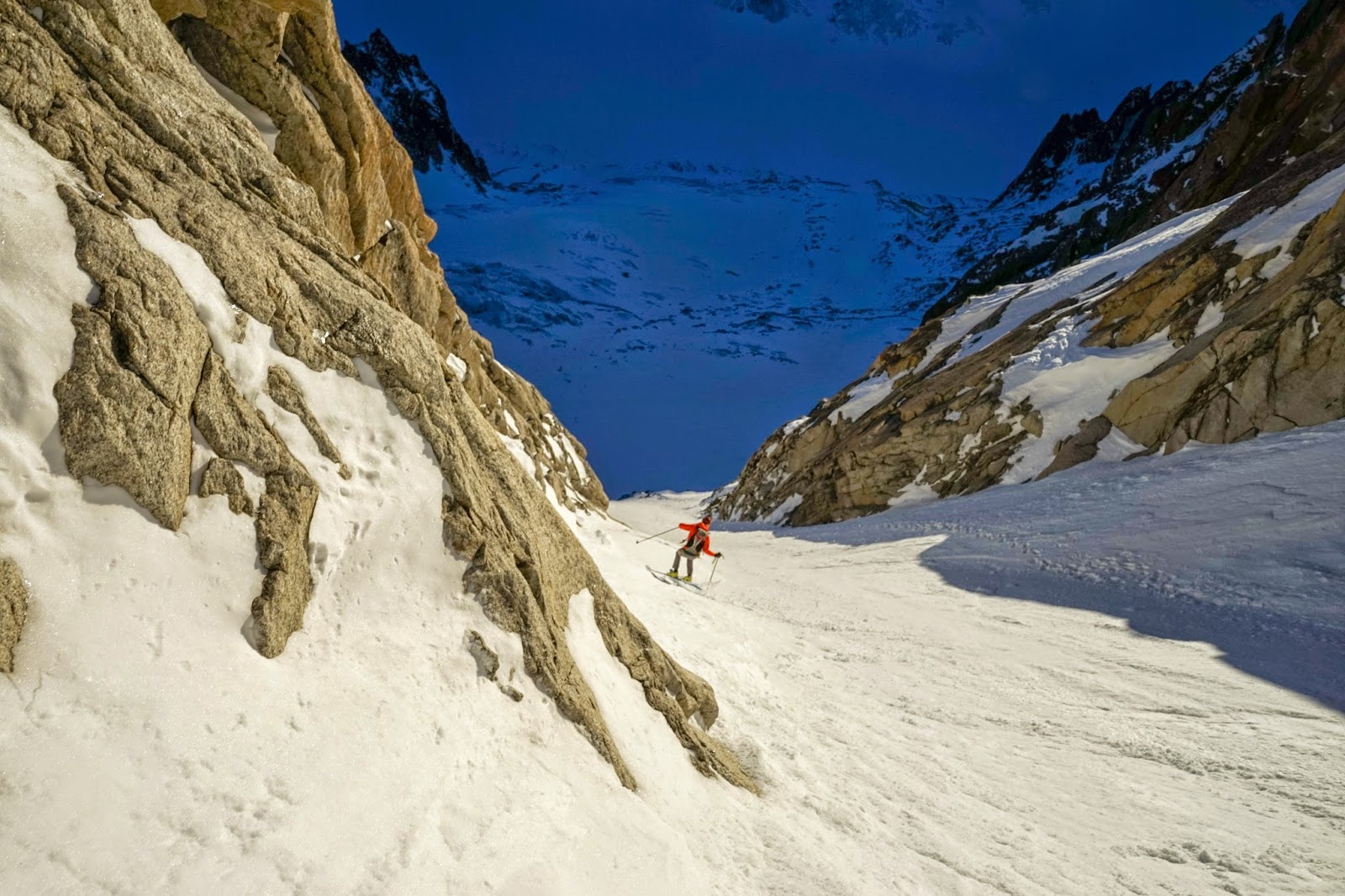 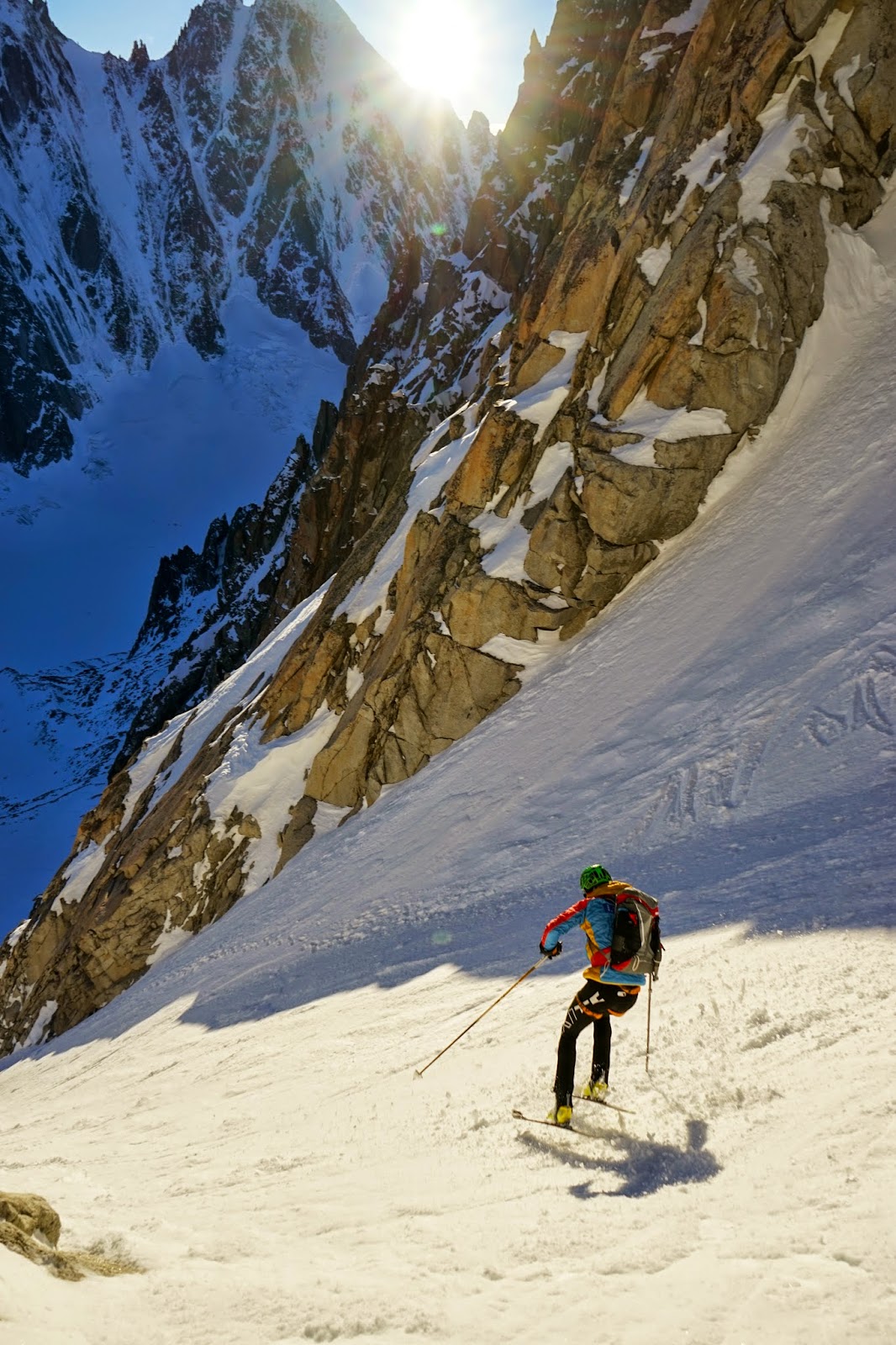 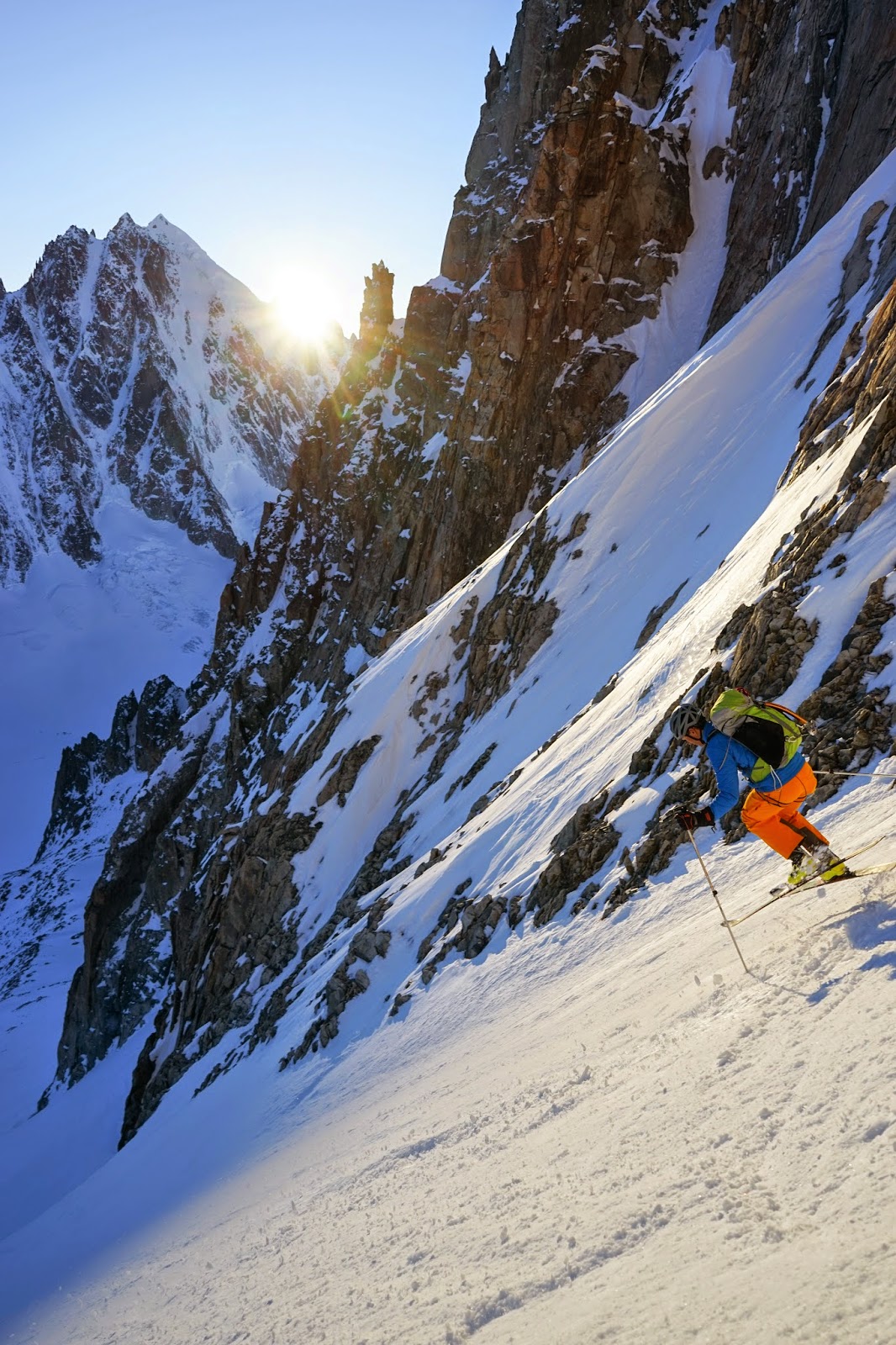 Well, on a rest day, Brian Edmiston and I got a rude awakening to skiing in Chamonix.  Pete Gaston and Max Taam, both of whom are well experienced in this area made a few recommendations.  We had a few big lines on the agenda and decided to "ease" into it with the Poubelle Couloir.  Almost immediately after stepping off the Brochard lift at the Grand Montets, one can walk over and drop into the Poubelle.  It typically requires a short rappel from the fence line to bypass rocks and an icy entrance.  When I walked up to the rail, it looked chalky and I was psyched.  We snapped a few photos, rigged the rappel, and dropped in to check it out.

What looked good, felt horrible and sounded worse.  Barely able to hold an edge side slipping, we turned tail and booted back out.  I think the recent high winds and western exposure combined to turn the surface to an icy death wish.  I found this a fitting start to my Chamonix experience.

From there, we took the tram to the top of the Grand Montets resort and were lured out of bounds and down onto the Argentiere Glacier.  The huge north faces of the Aiguille Vert, Les Droites, and Les Courtes towered above while we headed up the glacier.

We decided to just explore and ski whatever looked appealing.   I had a very strong desire to head up an aesthetic couloir that I later discovered was the en Y on the Aguille d'Argentiere.  I wanted to stand on a summit and it looked reasonable but Brian had his eye on a glacier just a little higher.

We climbed up until we found ourselves even with the dark walls, high on the other side of the Argentiere Glacier.   At the col, I could barely contain my excitement.  I wanted to climb and ski everything in all of Switzerland and France.  Unfortunately, reality dictated that we head down to catch a train back to Martigny as Brian's wife was racing early the next morning.

The ski out the Argentiere was enjoyable only for the views as the snow was unpredictable and destroyed by wind.  On the way down, we spied some generic couloir and decided it was a must.  This time around, the sun had done its work and the surface was soft.  The chute led up and over to the Glacier Amethystes.  I got one last view of the Aiguille d'Argentiere and the Y before we turned down and enjoyed fantastic turns in one of the prettiest places I've ever been. 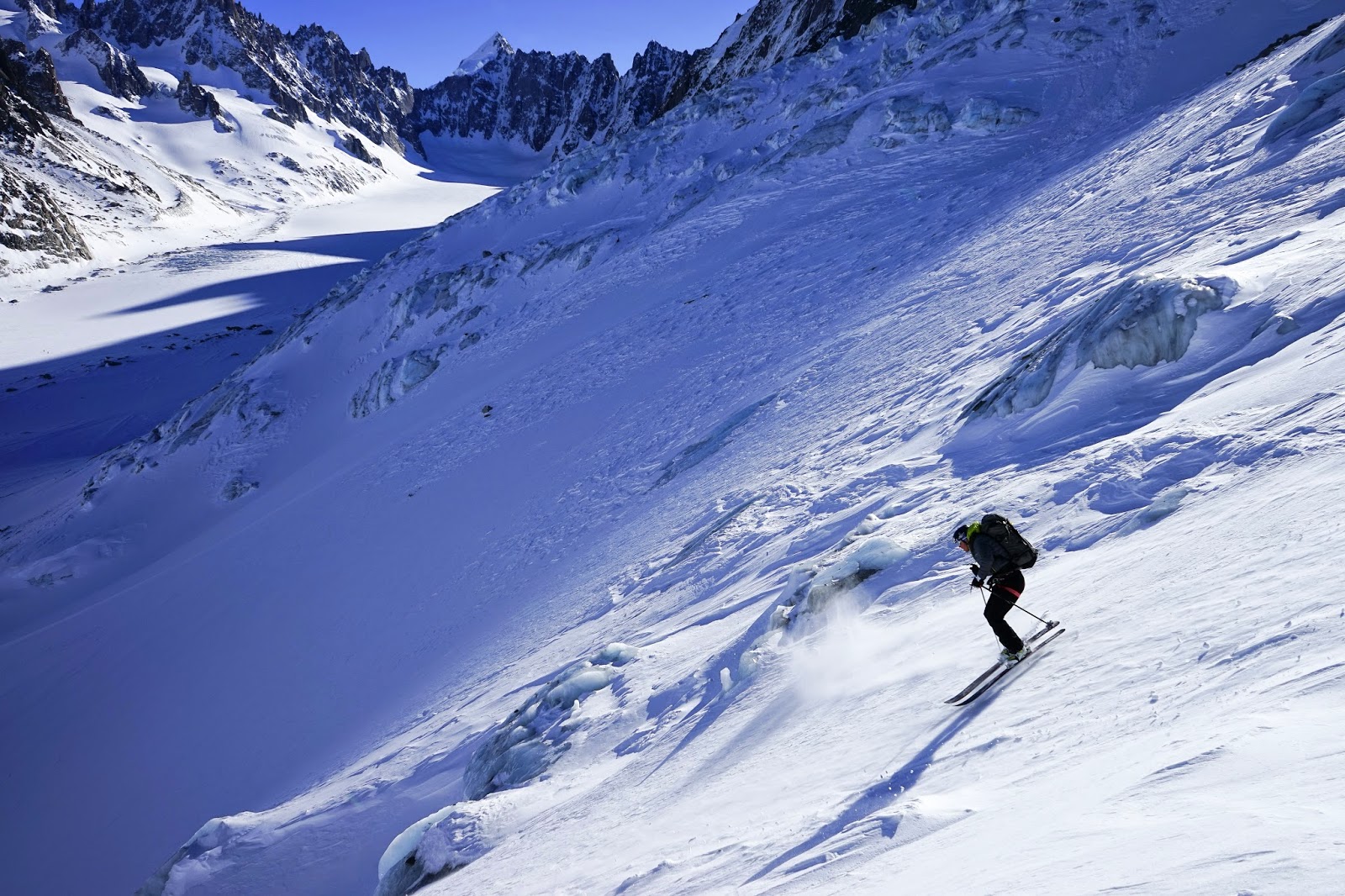 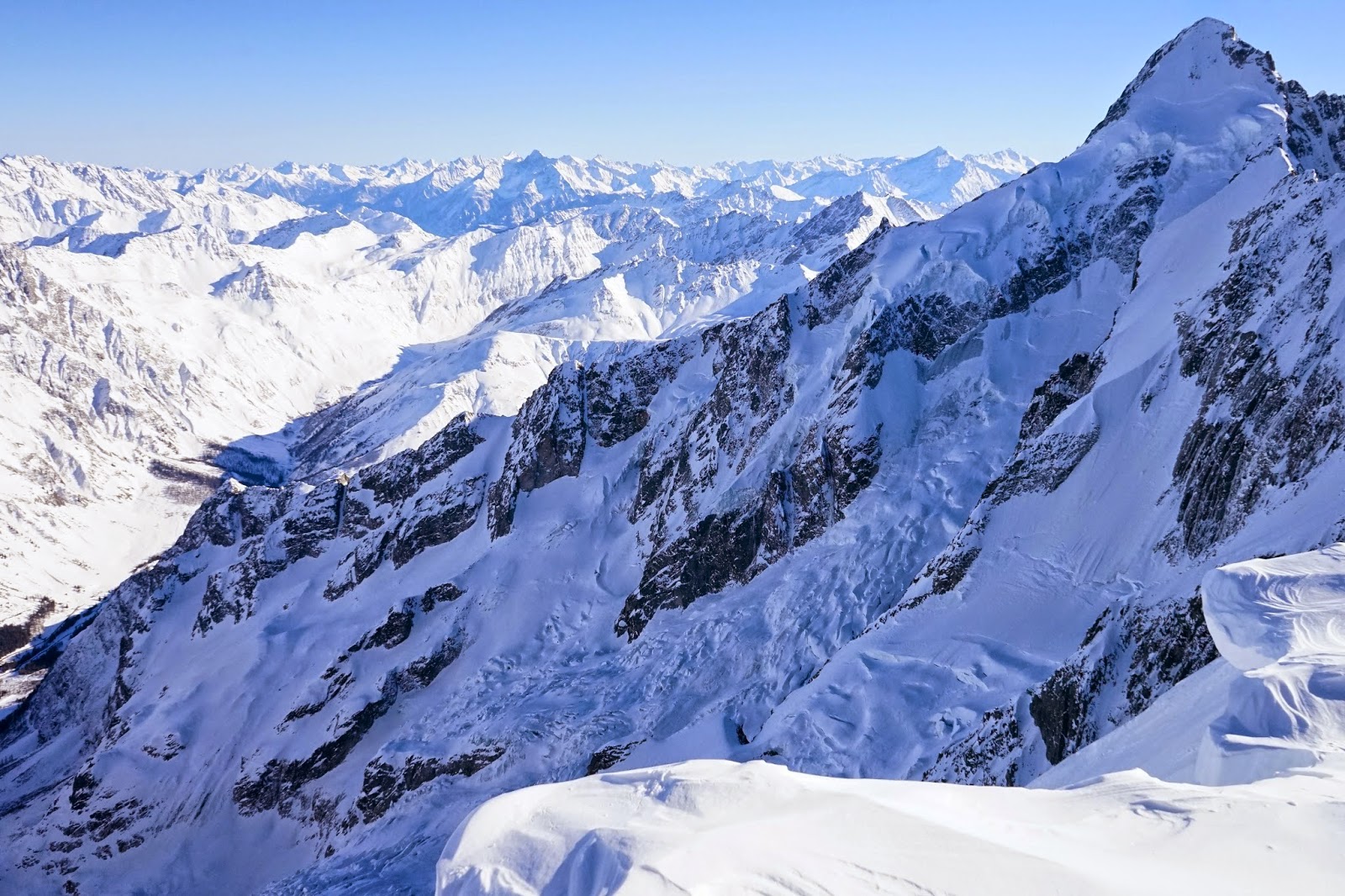