Just one week after skiing in the Palisades, we packed up again and made the drive across Nevada to the ski mountaineering mecca of the Sierra.  On our previous trip, we had spied this stunning line on the north side of Temple Crag, a peak that is much better known for its climbing potential than skiing.  We could only find obscure references to the North Couloir as an alpine climb with a reported pitch or two of WI 4/5 and steep snow.  The photo below was enough to jump it to number one on our hit list.

We got a pseudo alpine start, avoided getting lost, and soon found ourselves booting up the apron and into this tight recess with soaring granite all around us.  The snow was boot top powder and the position was better than we could have imagined.  We were excited yet apprehensive because of the unknown climbing ahead of us.

Our rack was small and while we haven't climbed much lately, I was feeling unusually sendy.  I claimed the lead and with Jason belaying, made slow but steady progress to a natural stance on the right side of the steep wall that separates the lower and upper chute.  There, out of gear and feeling proud, I tapped out and set up a belay to bring the boys up.   Jason would have to finish the job after he seconded with two pairs of skis on his pack!


The second pitch was shorter but probably represented the technical crux with some steep face moves that were marginally protected.  Jason had some doubts, but ultimately sent it with aplomb.  Once reconvened above the cliff band, we were completely blown away by the setting, snow, lighting, and overall position.  I think we all could sense how lucky we were to be there and we hadn't even started skiing yet. 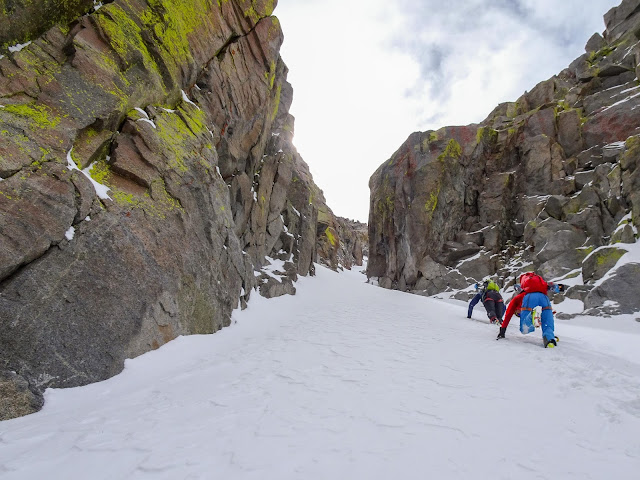 Above the cliff band, there is a Y in the chute, with the left fork taking a more direct shot to the summit.  Since summits matter, we intended to follow it to the top but after a few hundred vertical, it became clear that we would not be skiing from anywhere near the summit.  The summit block was nothing but rock so we clicked in and skied back to the confluence below to investigate the more aesthetic right or direct branch.


This direct branch, continued upward for hundreds more vertical feet and passed over two or three lesser rock bands, which in a bigger snow year would be completely covered.  Although, mostly in the shade, the air was calm and the work of breaking trail in now knee deep powder kept us warm.

Topping out the chute, we basked in the Sierra sun for a while and enjoyed our position.  We were about to ski one of the most striking features any of us had ever seen. 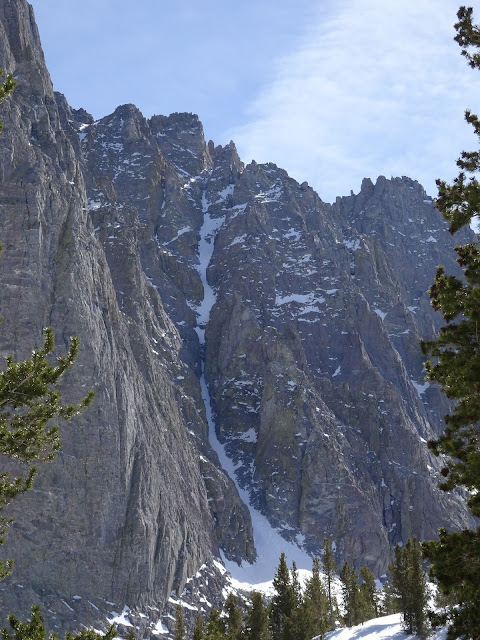 This may have been my most enjoyable day in the mountains...ever.  Good partners, good snow, good weather, and a pretty damn good line make for really good ski mountaineering.