Sitting in a room at Motel 6, listening to thunder, I'm reflecting on the year and our still very long "to do" list.  Jason and I have this whole week off and planned on working on some "larger" projects in the Tetons.  Unfortunately, JD must not have been living right because the forecast today was for 80 percent chance of showers and highs in the 60s at 10,000 feet.  Sadly, this appeared to be the best day of the week so we geared up for every possible scenario and started biking to Lupine Meadows just after 3AM (road opens May 1st).

Both of us have used this TH multiple times and thought we knew how to get around in the mountains.  The plan was to follow the summer trail to the Amphitheater Lake turnout and then head up into Glacier Gulch.  Somehow in the moonless night, we lost the trail and spent a full hour walking in a circle.  Happening upon our up track, we thought we'd found the way.  Then, seeing the freshness of the tracks through the isothermic snow, we realized we had been completely turned around.  Sheepishly backtracking until discovering our initial wrong turn, we set the course straight.

Finding more isothermic snow that was hidden by a weak rain crust after Delta Lake, we were not hopeful that we'd get anything done.  Laboring onward under the weight of heavy packs, we decided to poke around Teewinot and started up the SW Couloir.

The snow conditions continued abysmal but the scenery was striking.  We traded trail breaking duties and soon found ourselves working our way above the East Face and toward the summit ridge.  A bit of scrambling deposited first Jason and then me on Teewinot's wildly beautiful summit.

As we crossed the upper East Face on both the ascent and descent we understood our day was done.  The storm was yet to materialize but the bluebird skies and strong sun were wreaking havoc to the already poorly structured snowpack.  With the clock ticking, we reversed our course and enjoyed perhaps the worst turns of the year back to the summer trail.  There, we played the skis on/skis off game a dozen times before committing to walking through and around the slush back to the trailhead.   Unaccustomed to the bike, it was surprising to find how sore our butts were on the ride back to the car  and the end to our woeful adventure.

With continued unsettled weather in the Tetons, a poorly structure snowpack, and a rapidly receding snow line in the Wasatch, I wonder if the year is over?  Teewinot was a good consolation prize but I'm still eager to explore a bit more.  We have a few days to mull it over, but for now, we're turning tail and heading back to SLC.  Every year I shake my head at all those impatient souls who hang up the skis and start mountain biking in the mud.  While I don't bike, it might be time embrace that idea and start hitting the trails (on foot).

But then again, next week the weather looks cooler in the Tetons...

Last week, I received a text message from another candidate for "most consistently happy man alive," Chad Ambrose.  It read, "Early next week's weather looks pretty nice in the Tetons..."  That sparked a flurry of replies from both me and Jason trying to convince Chad to go on our respective days off.  The forecast called for better weather on Tuesday so Jason got the boot.

The plan was to drive up after work on Monday, try to catch some sleep at the trailhead, and then ski the Ellingwood Couloir on the Middle Teton.  Always trying to imagine the perfect day, I suggested we link that up with the Chounaird and SW Couloirs and then the Glacier Route for a type of "quadfecta" or Middle Teton Project for lack of better name.  However, both of us decided on the way up that if we could just ski the Ellingwood from the summit then the day was ours.  The rest would be gravy.  Steep white gravy.

I've been battling a cold for two and a half months (ever since Lars started daycare), so I opted to pay the $45 for a room at Motel 6.  This allowed three and a half hours of dark, dreamless sleep, effectively recharging my battery.  Poor Chad, twitching with nervous energy and unable to escape my snoring, passed those three hours with his thoughts and bright eyes.

By 4 am, we were skinning from the Taggert TH, following frozen tracks by a mix of moon beam and headlamp.  Using ski crampons, we easily ascended the steep lower reaches of Garnet and another hour later, the dawning day revealed the great basin that forms the South Fork of Garnet Canyon.

I was surprised at how accessible the Ellingwood is while we readied our crampons.  Initally, I was worried we'd be too late to safely ski these steep lines on such a warm day.  Now, using French technique to ascend, I was curious if we were too early.


The firm conditions made for fast travel and we quickly found ourselves at the notch, looking toward the summit block.  Here, Chad courageously and wisely declared that the Ellingwood was too bullet to ski within his margin of safety.  I brushed him off and said it would be fine corn by the time we tagged the summit.

We worked our way up the East Face, passing a few rock bands along the way.  Each one reinforced my suspicion that I haven't climbed enough in the past couple years and feel awkward on rock, particularly with ski boots, crampons, and skis on my back.  Time to get back to the vertical I guess.  Climbing rock really does lesson the relative verticality of ski lines as one becomes accustomed to the steepness of rock routes.

We topped out a little before 9 AM and took in spectacular views of the surrounding peaks.  The air was warm and calm and if it weren't for a nagging sense of urgency to get down and off the East Face, we would have lounged around for a while.  Looking to the north, it was obvious the Grand had been skied multiple times in the last day or two.  Irrationally or not, this gave me a bit more confidence to lay tracks down the steep snow fields from just below the summit of the Middle.


With the still air and rising sun, it was time to go.  On the ascent, the snow was punchy in places but the overall energy felt low.  We trusted the stability for the moment but wet slides seemed imminent with day time heating.  I made an initial pathetic ski cut before pulling into an island of safety.  Waving Chad through, I expected him to tuck into the next safe zone.  Seconds later, he was halfway down the upper East Face, navigating a small cliff band above the notch.  When my turn came, I couldn't believe our position and the soft conditions.  I had hope that my promise of corn in the Ellingwood would be fulfilled.

Once regrouped at the notch, I dropped into the Ellingwood to "prove" it was soft.  My first couple turns were met with that horrific sound of metal on hardpack and I sheepishly looked up at Chad who was wagging his head.  Damn.  I booted back out and we decided to eat a snack and wait half an hour for it to soften.  On my next entrance, the first turn was buttery smooth, the second a bit grating, and the third bone jarring.  It still wasn't even close to ready.

Here, Chad very honestly and refreshingly stated that he had a duty to self and family and preferred to ski the Glacier Route with its promise of creamy powder.  Feeling a duty to partnership in the mountains and happy to ski powder over stressful boilerplate, we bailed on the Ellingwood and the remainder of the Middle Teton Project.  I have no doubt that we could have waited and scored the Ellingwood in ripe corn but to do so would have been at increased risk of wet slides from above.   We followed a feeling or premonition and have no regrets.

Below is the alternative: 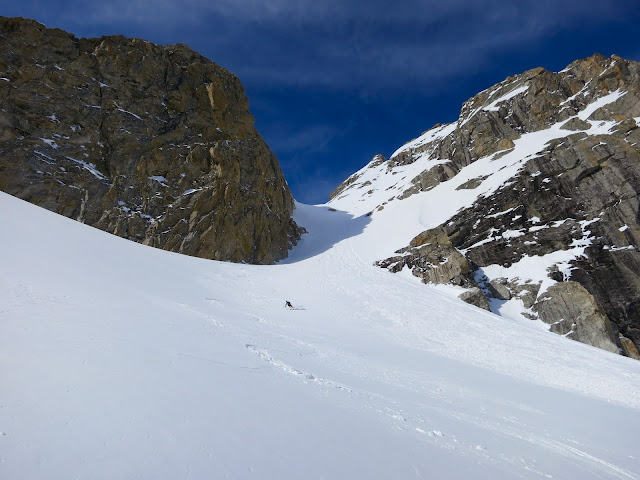 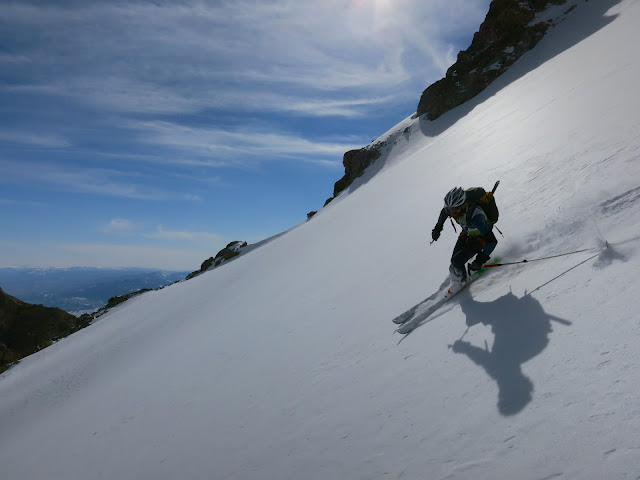 Off the Glacier and looking for more sheltered skiing, we considered our options.  Both Hourglass Couloirs were still shaded and suggested soft conditions.  Lacking steep, stable powder in the Wasatch this year, we decided to go looking for more after thoroughly enjoying the Glacier Route.

Ascent pics of the East Hourglass:


Thoroughly impressed by the ambience, pitch, narrow walls, and darkness of the East Hourglass, we were psyched to leap frog each other down this highly underrated couloir.  From the top, we down climbed the upper 20 feet of rock, skied the steep 50-55 degree hallway to the main rocky choke, down climbed some more, and then laughed our way down the rest.
Descent pics: 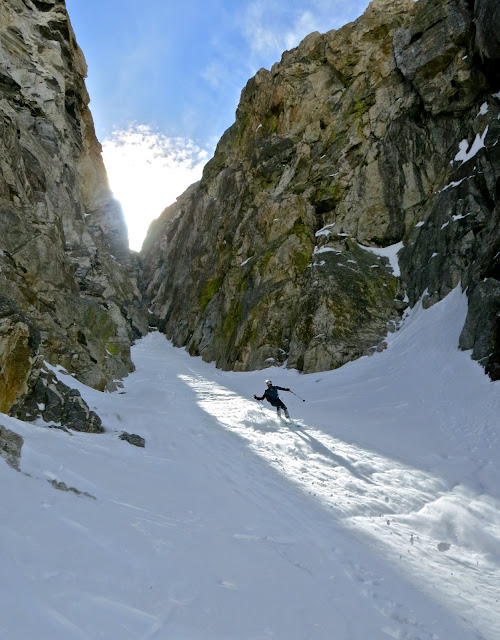 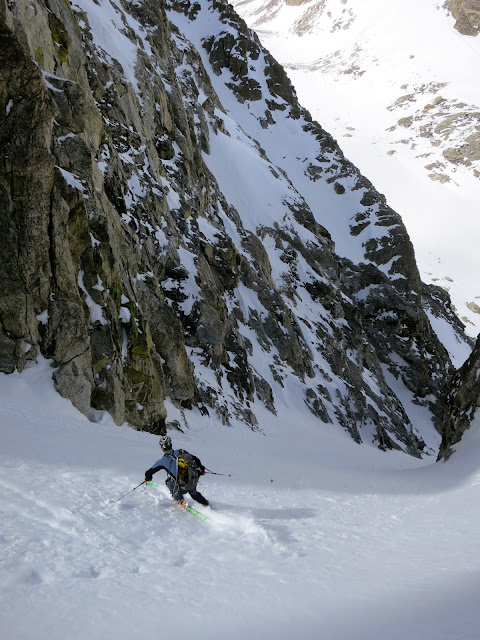 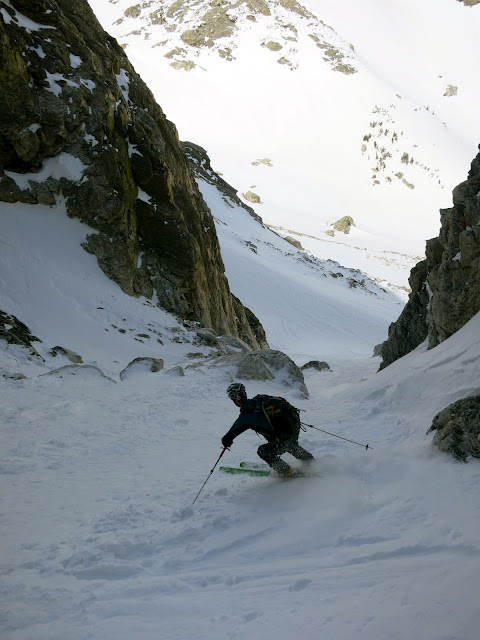 Standing at the confluence of the Hourglass Couloirs, the right thing to do was to then climb and ski the West.  Striving to always choose the right, up we went.

We lounged around at the top, reflecting on our amazing day.  We hadn't skied what we initially intended but did find around 10,000 feet of beautiful climbing and skiing.  We were loyal to each other and felt we were safe in our travels.  I wish that daylight, food, and time could have been stretched to permit a couple more lines but the clock was ticking.  As is nearly always the case, we both had to be back in SLC within 24 hours of leaving.

Looking back at the high peaks from the trailhead, I'm sustained for another few weeks.  Hopefully, the next weather window aligns with my next bit of free time.  And, hopefully Chad Ambrose will be back! It's hard to find strong, honest, happy partners that will always try to make the right call.  And by "right", I mean as Bart once said, "The goal is to come home safe, friends, and successful, in that order".   Success can have many definitions in the mountains and completing my prescribed Middle Teton Project is just one form.  I'd say that skiing big lines in stable powder on Chad's first ski trip in the Tetons after a long winter of dangerous conditions would be just that.