We decided to head up Lone Peak again since it's been so nice lately.  Having climbed it twice from Alpine this year, we made the easy choice to ascend from Bells since it's a bit of a short cut...at least it short cuts the drive.  Aaron Smith joined me and JD and we went up searching for the entrance to a chute we bypassed when skiing the NE Couloir last week.

Our first choice cliffed out multiple times when viewed from below so we kept moving farther up Bells until a nice plan B came into view.  This line, the farthest south on the NE face of Lone, was a mixed bag with some steep "blue snow", some soft slough in the gut, and some chill ridge skiing from the South Summit.  I've skied it once before on race skis and it got my attention that day.  Yesterday was no different.

Overall the day was surprisingly good considering the lack of new snow and general sentiment among the locals that the skiing is crap.  One thing is for sure, we didn't see another soul on one of the Wasatch's best mountains.

I've been trying to improve my photography lately, but the day was challenging with the low light and monochromatic background.  Watching Jason work for good angles and a new camera will help.  Also, friends that wear colors other than black (Tom) will also hopefully help on days like this.

Posted by SLC sherpa at 3:48 PM No comments:

Today was Lars' late day, meaning he didn't have to be at work until 1pm.  That gave him some extra time to roam the hills this morning and we all try and make an extra effort to join him on these days.  He'd never skied anything off the north end of Timp so after collecting Jason and Teague, we rallied up American Fork Canyon still undecided on an objective.

Lars and Teague have never skied the Cold Fusion but I kinda think it's lame compared to some of the other options.  Plus with the vis going to crap and our limited timeline, I much preferred the more aesthetic Grunge.  Fortunately, the guys were easy going and the end result was one of Lars' favorite ski descents ever in Utah...even with junk snow.


Getting over to the main summit took a little convoluted booting but soon we were all six perched on the small summit block, eager to get to the business.

The down was mostly soft and entirely better than expected with only a couple "scratchy" sections.  The cliff at the bottom was bigger than ever and we took the long way around.


Once on the apron, Jason and I made haste for our exit.  Fortunately, there was just enough snow to ski out to the trail where we switched to shoes and ran to the car.  Work and family duties were waiting.  The other guys with no such responsibilities today made the most of the conditions and tagged Chipman and Box Elder for some 12000 feet of steep skiing.  Well done boys! 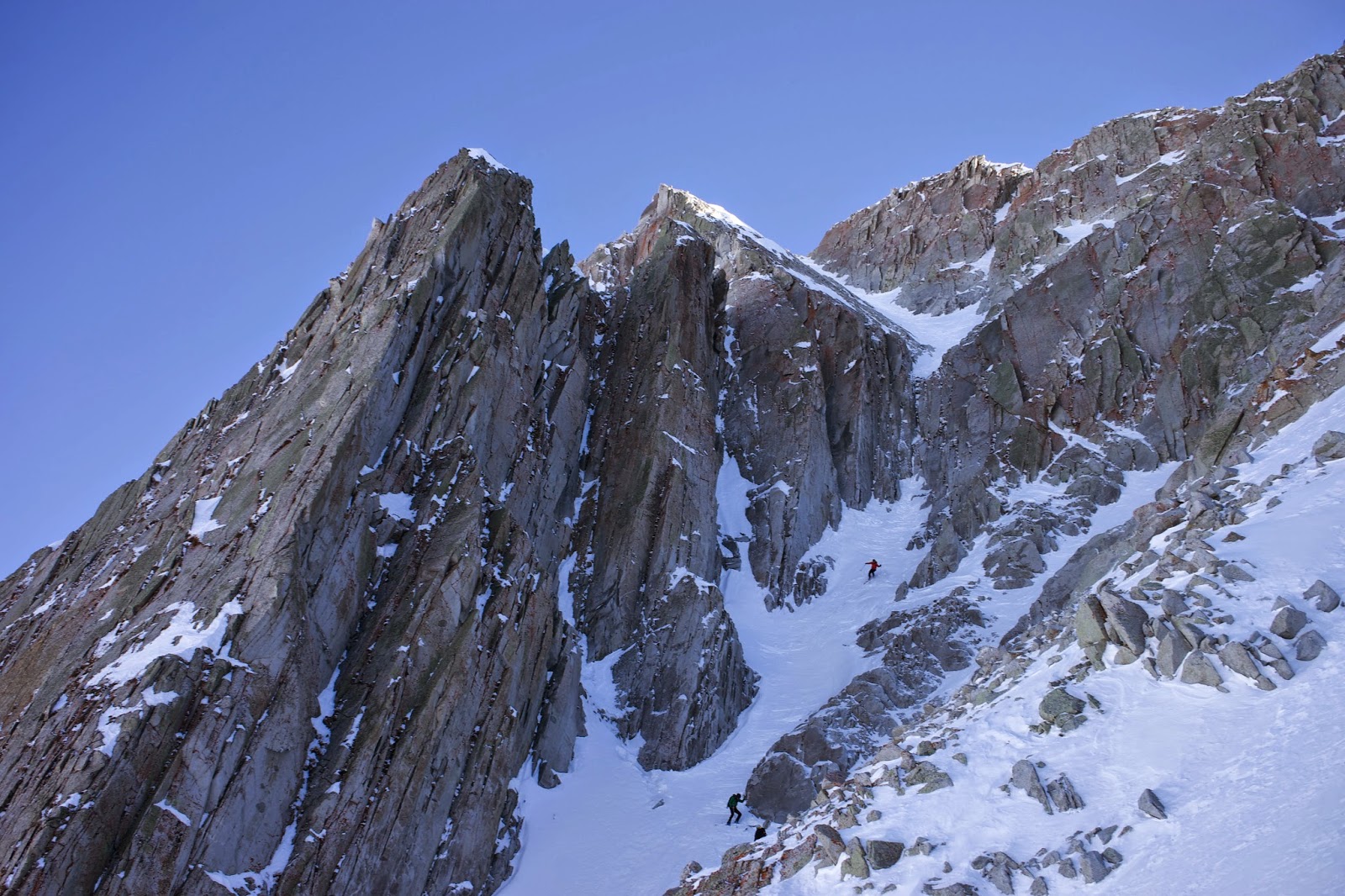 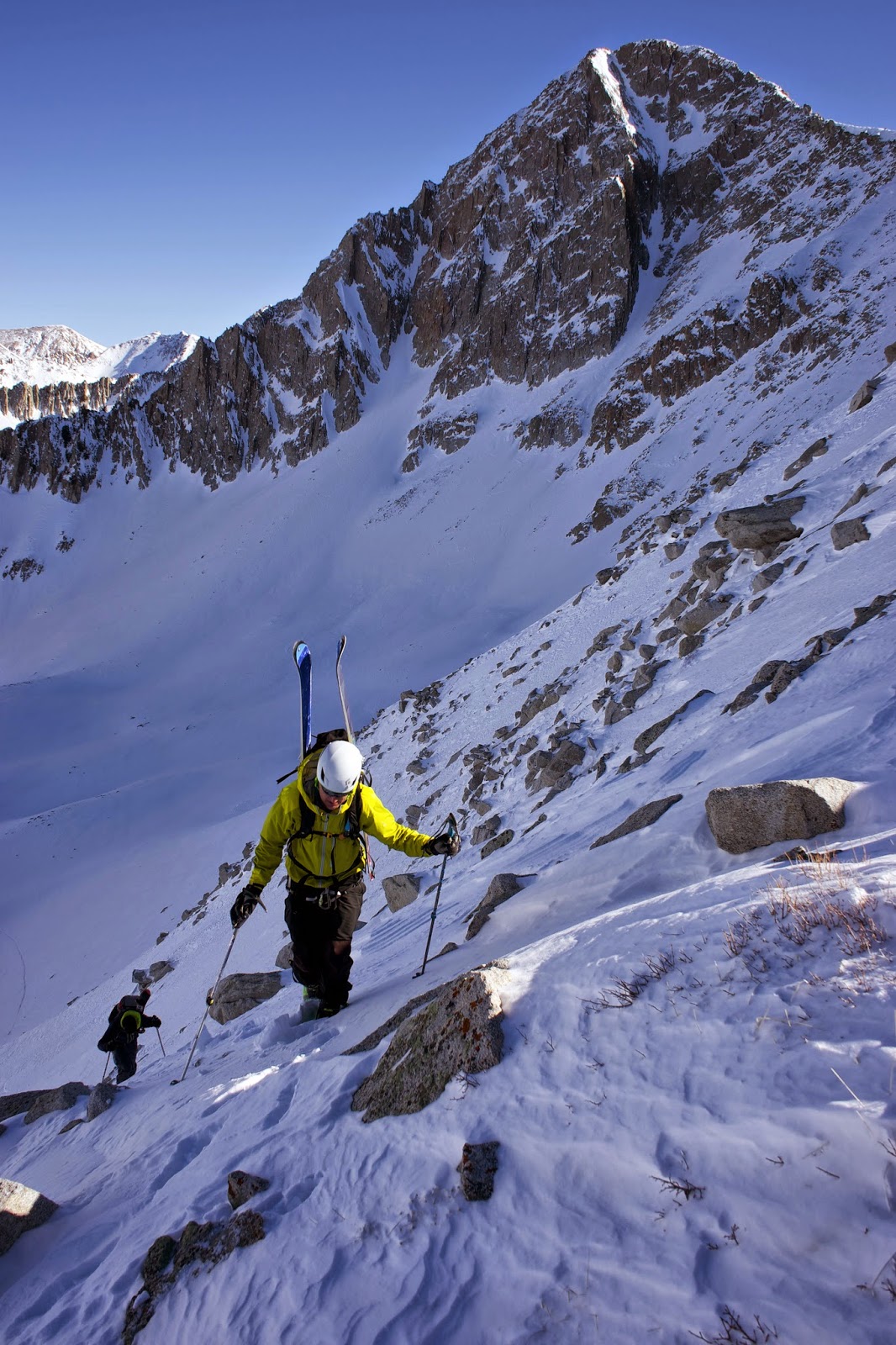 Posted by SLC sherpa at 9:57 PM No comments:

Wizards of the Wasatch

Fitz Cahall came to town this week to work on a film project for Outdoor Research.  He wanted to go somewhere scenic so I chose to head up the White Pine drainage again.  We broke trail into the upper drainage, heavy laden with big skis and camera gear.  They day was calm and sunny and Sam Inouye, who now lives in Alaska, asked if the weather is always this good around here.  I guess he's already forgotten how special this place is.  But, none of us expected what was to come.

The entire day, we had the drainage to ourselves.  The skies were dramatically undercast and we all kept commenting how uniquely stunning the mountains were.

In the end, we skied three amazing shots in dense powder, pretending like we know how to ski before the camera.  I know there is already a Wizard of the Wasatch, but this day was so beautiful and magical that we all felt like happy little Atheys.


We all skied each run top to bottom nonstop so unfortunately didn't get any pics of the down.  I was on F1 Evos and DPS 112 Wailers and the skiing was so good, I forgot about my camera anyway.

Which brings up another question.  Over the past few years, I've mainly been using an iPhone and sometimes a Canon S100.  I'd like to step it up and improve my photos.  Any recommendations for a camera?
Posted by SLC sherpa at 10:51 AM 3 comments:

This last weekend concluded the qualifying races for the US Ski Mountaineering Team.  There were two standard races at Grand Targhee and JHMR that I chose to forego in an effort to focus both on the sprint race at Snow King as well as some adventure skiing in the park.  I'll not mention much about the two grand races other than Jason won at Targhee and Tom won at JHMR, elevating the Wasatch to the top of the podium.

The sprint championship was to determine the participants in the discipline at the World Championships in Verbier, Switzerland next month.  It's an odd event consisting of a sprint start, multiple kick turns, a skis to pack transition, a second set of kick turns, and finally a descent through gates and a skate to the finish.  The entire event is supposed to last five minutes +/- a couple depending on the actual vertical gained.

The standard format is to start racers at 30 second intervals, each one performing a time trial of the course.  This will qualify a percentage of the racers into heats of six with the top three advancing through rounds until a final of six racers is determined.  At the Snow King race, rather than have racers move through rounds, the top twelve were placed into a super skier cross style finale.

My initial TT seemed to be going well until just before half way and while on the kick turn section, I inexplicably stepped out of my binding.  Staying calm, I attempted to click back in, knowing that a few seconds lost wouldn't make a huge difference at this stage.  Then I realized I'd incurred a catastrophic binding failure where the toe piece wing, just under the pin, had sheared off.  No longer calm, I looked into the gray sky roaring obscenities.

Marshall Thompson soon passed by and actually offered to take off his ski and let me proceed with his.  Lars Kjerengtroen did the same seconds later.  Demonstrating the utmost class, both knew I cared about this race and were going to commit suicide in theirs to help me out.  I refused and set out to the base area to plead my case.

Fortunately, the judges allowed me to get in the back of the line to restart a few minutes later.  Also fortunate is the fact that Jason and I wear the same size boot and can exchange gear on a whim.  The second go felt much harder and I tied up mightily while not feeling particularly fast.  I could taste my lunch but it was enough to move on to the final.

Standing in under the lights with eleven other guys about to go all out for five minutes was energizing.  There is an episode of the Dirtbag Diaries by Kelly Cordes called the Pugilist that talks about that feeling of being alone while stepping into the ring.  I was not alone but we were about to try and hurt each other.

The start was much too fast as everyone jockeyed for position before the wide starting straight pinched into the skin track and kick turns.  I made a move to the front and immediately slowed the field down through the narrows.  The next time I looked down, the only headlight within striking distance was from viking Lars and now barring a second disaster a good outcome was ensured.

Skating hard but inefficiently toward the finish line, I could hear Jason screaming, "They're gaining on you!" but I knew he was full of shit.  Here, even while not racing him, he was trying to make me hurt.  He yelled the same thing at each subsequent racer, even if no one was in sight.

Lars stayed the course and finished a strong second also qualifying for the US team.  It was an instance where the outcome went as well as could be hoped for.  Prior to check in, I mentioned to Lars that it would be perfect if we could go one-two regardless of the order.  In the dark, still breathing hard, we clinked poles, gathered our gear, and made our way towards some Thai food.

The next day most of the guys were going for glory at JHMR but Lars and I were going for adventure in GTNP.  Joined by Mark Smiley, we got a reasonable 7am start and leisurely made our way up Avalanche Canyon.  I've been in the Tetons dozens of times and this was my first trip up this drainage.  The weather was dramatic, threatening to shut us out at times but at others urging us along with hints of sun and thinning clouds.

Our objective, at the recommendation of the prolific Zahan Billimoria, was to climb and ski the NE Ridge/Face of Mount Wister.  He had texted me a beta photo the day before and the terrain looked reasonably big, steep, and just about perfect for an adventure.  Kitted out with skimo harnesses, ski crampons, real crampons (actually skimo crampons), a couple sections of light rope, and an axe and we felt ready for adventure. 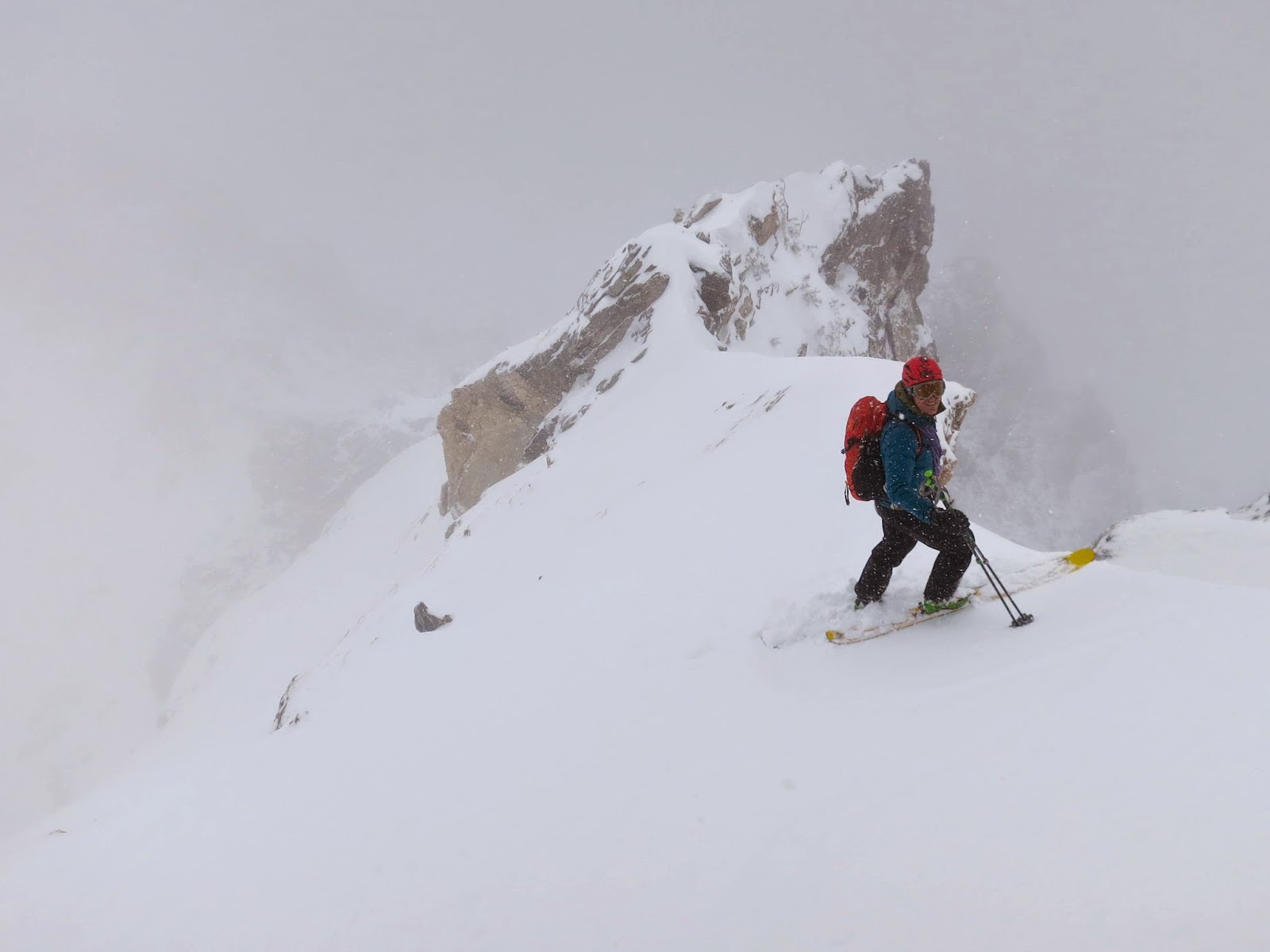 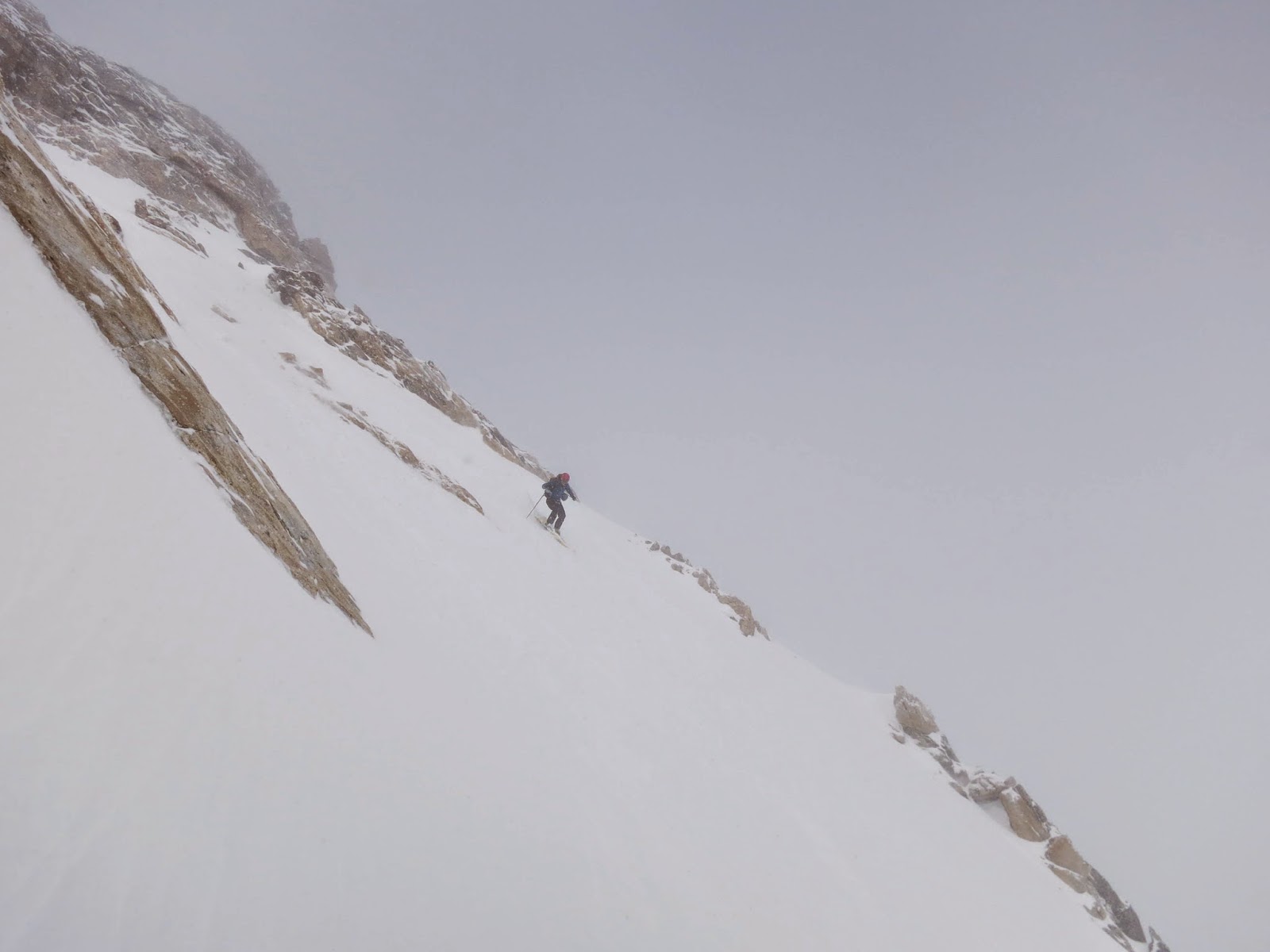 In the end, it was a mighty fine weekend filled with great friends, good food, and with a perfect racing to adventuring ratio.  Now I'm sitting at home in SLC looking out at sheets of rain, wishing I was still in the Tetons.  Lars just sent a text saying he's going to put some pictures up in his office of Teton ski lines he'd like to tick off so he can day dream away the reality of work.  I guess that's kind of what I'm doing right now...