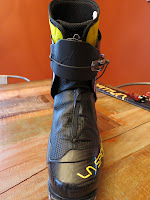 Santa was good to me this year and dropped off the new La Sportiva Stratos Evo.  I've been in the market for one of the new ultra light boots for a while, but finally chose the Stratos over the Scarpa Alien and the Dynafit Evo.  Weight wise, in a size 27, it turns out the Stratos is probably the heaviest of the three, but negligibly so (40-50 grams). I think it may ski the best (without actually skiing the others) and   ultimately, it was the stiffness of full carbon, the reputation of La Sportiva, and the sheer beauty finally swayed me.
Right away, the quality craftsmanship is noted on handling the boot.  Handmade in Italy, the boot looks and feels like it could be worn with a suit (real suit that stiffs wear to work, not a skin suit).  I thought I could just pull it out of the box and try it on but just as this video implies, some instruction is necessary.  However, this is the new version of the Stratos, and actually isn't too cumbersome to figure out. 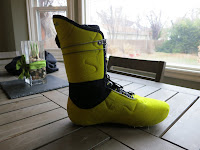 Starting with just the liner, I loosened the unique lacing system, slipped my foot in, and was happy straight away with the performance fit.  Snugging up the laces and then wrapping them around the ankle a time or two and then keeping it all in place with a velcro tab also allows one to really dial in the fit.  Once the liner is placed in the boot, a second velcro tab secures the forefoot in place and seems to internalize the 2nd "buckle" and make it perform consistently well as it doesn't pop open as with other boots.  Finally, a well designed gaiter keeps snow out and streamlines the appearance.

For a race boot, or any boot designed with speed in mind, the closure system needs to be swift and efficient.  Scarpa and Pierre Gignoux use a vertical lever system that latches on the lower posterior aspect of the lower shell.  When the lever is closed, it tightens the cord around the cuff and locks the whole mechanism into place.  Genius.  Dynafit has come up with an overlapping cuff that is locked into place with a side throw buckle.  This horizontal lever has a pin that is inserted into a hole through the overlapping segments.  Also genius.  Both require a single action to transition between ski and walk mode.  Sportiva has stepped into the game and created their own mechanism that appears to blend the other two.  The Stratos have a horizontal throw that tightens the cord around the cuff and pulls a vertical lever into a notch in the back of the cuff.  This locks the cuff in place as the lever spans from the lower shell to the above mentioned and pictured notch.  It sounds complicated but in reality is smooth and really fast.  My only concerns are the durability of the plastic appearing lever and the fact that the receiving notch is built into the carbon cuff without apparent reinforcement.
As pictured above, the dyneema cord holds the whole shebang together.  It can be adjusted to fit both skinny legs and cankles.  I think mine are some where in between and will require a bit of fiddling since I still had a bit of room in the cuff to wiggle around.
One of the coolest aspects of the whole closure mechanism is how easy it is to release.  When the buckle is opened, a tension bar pushes the vertical lever out of the notch and back into walk mode.  This is something I fought with at times with my Dynafit boots and I was psyched to be able to transition with the flick of a finger.
Since 90 something percent of our time is spent walking, the tourability better be fantastic for a race specific boot (I keep saying "race specific", but I think these boots might become a mountaineering boot for long traverses and speed ascents).  When the Dynafit DyNA came out with its 62 degrees of cuff articulation, I felt like I was in running shoes compared to other boots.  I didn't measure, but I'm willing to bet that the articulation of the Stratos exceeds that by a fair margin.


Durability in a full carbon boot is another big question mark.  A friend who skis full carbon Pierre Gignoux 444s has broken them multiple times, often at inopportune times such as while racing (although another friend skied Mount Robson in them!).  Carbon can crack and boots can break in a million different ways, but one area of wear that consistently appears is around the main rivets of the cuff.  I'm sure all you owners of the TLT Performance know what I'm talking about if you've put in any serious mileage.  All the new boots by Dynafit, Scarpa, and Sportiva appear to have at lease mitigated the problem by adding metal bushings to prevent the carbon on metal wear.
And what kind of sole did Italian boot makers come up with?  I'd have to say a surprisingly beefy Vibram sole that looks more at home on a traditional climbing boot.   If any weight were to be shaved it seems it could have been done here but again, it looks like all attempts were made to produce a quality product that will last.  The burly full sole also makes the thought of taking these "race boots" out for some real adventures. 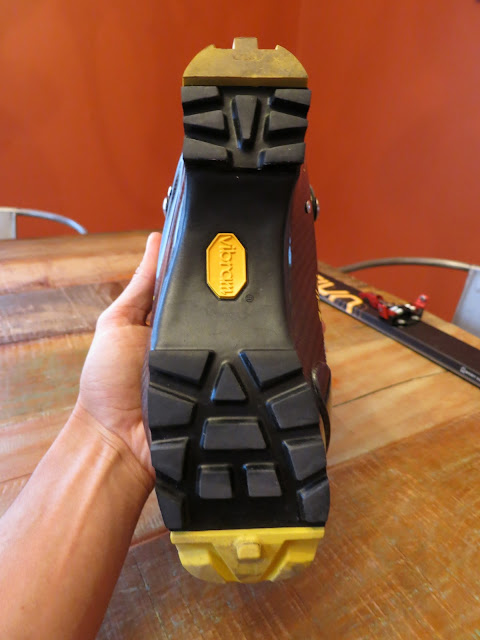 So with the heavy sole, the overall weight (with some sweat from this mornings workout) checks in at 740-751 grams per boot in size 27.0.  Advertised at 694 grams (534 for the shell and 165 for the liner) in size 26.0, I feel the weight is probably pretty accurate with with any marketing claims.  The sneaky  way the carbon boot manufacturers report weight can be misleading as Pierre Gignoux makes two boots, one the XP444 and the other the XP500 with the numbers being the weight of the shell.  Needing to brush up on my Italian, I missed that the liner weighs as much as it does and thought the boot would check in a bit lighter.  Chi se ne frega?
Oh, and did I mention the skis? 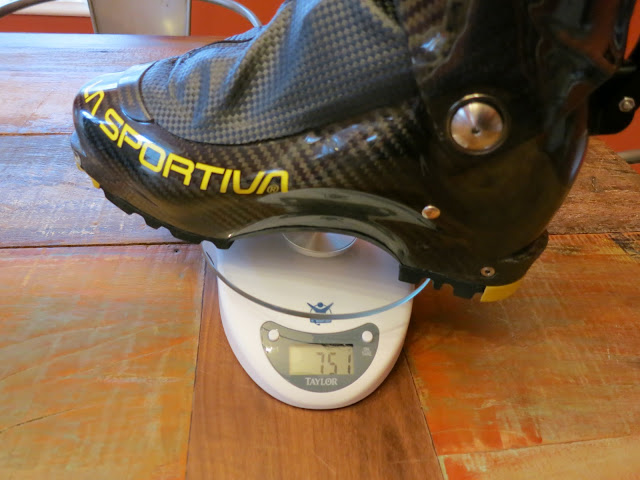 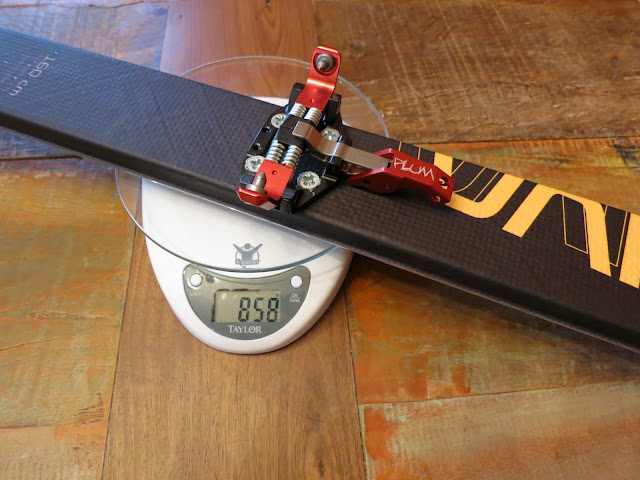 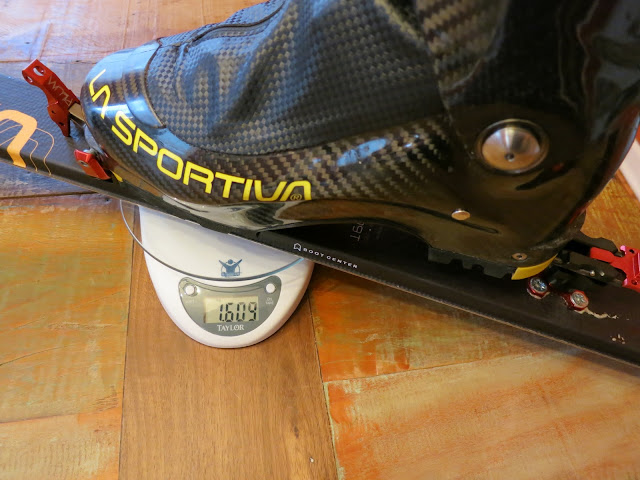 So I know the main question will be how do they ski?  After one day with the cuff not properly adjusted to the girth of my leg, I'm really optimistic.  It was slightly hard to discern the difference between the new boots and the new skis but at least the combination felt great.  The boots are stiff and the skis feel like razors (read new and not abused) compared to my others.  I might have to touch on the subject again once I have more days on the boots and have skied more than a couple groomers and soft chop.
But for now, I'm just psyched that Santa and his Italian little elves can make more than just rocking horses and other assorted crap.  They really stepped up their game this year.
Posted by SLC sherpa at 5:07 PM