Some years ago, I raced the Heathen Challenge at Sunlight Mountain outside of Glenwood Springs, Colorado.  At the time, I was psyched to to be racing but kept looking at Mount Sopris across the valley.  Why wasn't I skiing that big aesthetic mountain instead?

We are just back from a family vacation to the Roaring Valley and I finally got my chance to ski Sopris when I crashed some local guys' plans.  I had stopped by the Cripple Creek Backcountry store and chatted with Doug, one of the owners.  He invited me to ski Sopris the next morning and said to meet outside the shop at 5:30.  Up at 4:20, I readied myself in the dark and drove down the Frying Pan road to Carbondale.  We were staying up by the Ruedi Reservoir and chose the place as randomly as throwing darts while blindfolded.  Fortunately, we have good aim.

Just after 5:30 Randy, the other co-owner, pulled up and seemed surprised to see me.  Apparently, Doug had bailed but didn't tell Randy or Tony that I was coming.  They rolled with it and soon we were navigating dirt roads in the predawn light as the guys had gotten permission from a local ranch owner to start on their property, just underneath the Crystal Couloir of Sopris, which was the day's objective.

Out of the truck, I had another idiot moment when I realized I left my liners in my car back in Carbondale.  Not only did I just meet these guys fifteen minutes ago, but now I was about to ruin their day, or at least mine.   Luckily, Tony had a spare set of Alien liners that fit my boots in his truck and didn't seem squeamish about the fact that I was going to return them smoking with foot sweat.  What a guy!

We walked through the rancher's property, navigated some game trails until we hit snow, and booted around 4000 steps to the top of the Crystal Couloir.  It was mostly bullet proof with swaths of blown in powder that was an inch or two deep.  The skiing was going to mostly suck but it would still be a glorious spring descent.

At the top of the face, the guys sat down for some snacks but since I'd never been up there before, I headed up to tag the summit.  A few minutes later, I was atop a false summit and out of time.  It was already 10 AM and I was supposed to be back at the cabin by now to take on a full day of adventures with the boys.  I quickly texted an apology to my wife and turned it around.  From there, I skied  a rocky strip of snow back to the guys, and then we all clicked in for thousands of feet of spring skiing on that very face that had captured my attention years ago.

It's not that steep or really that long, but it dominates one's view driving up the valley and was an unexpected bonus of an already great family vacation.

Sidenote: The rancher sent a photo of us to Tony crossing his property taken from a security camera that was apparently taken just moments after a couple mountain lions had stalked through.  Let those stand as two reasons (cameras and lions) to not trespass. 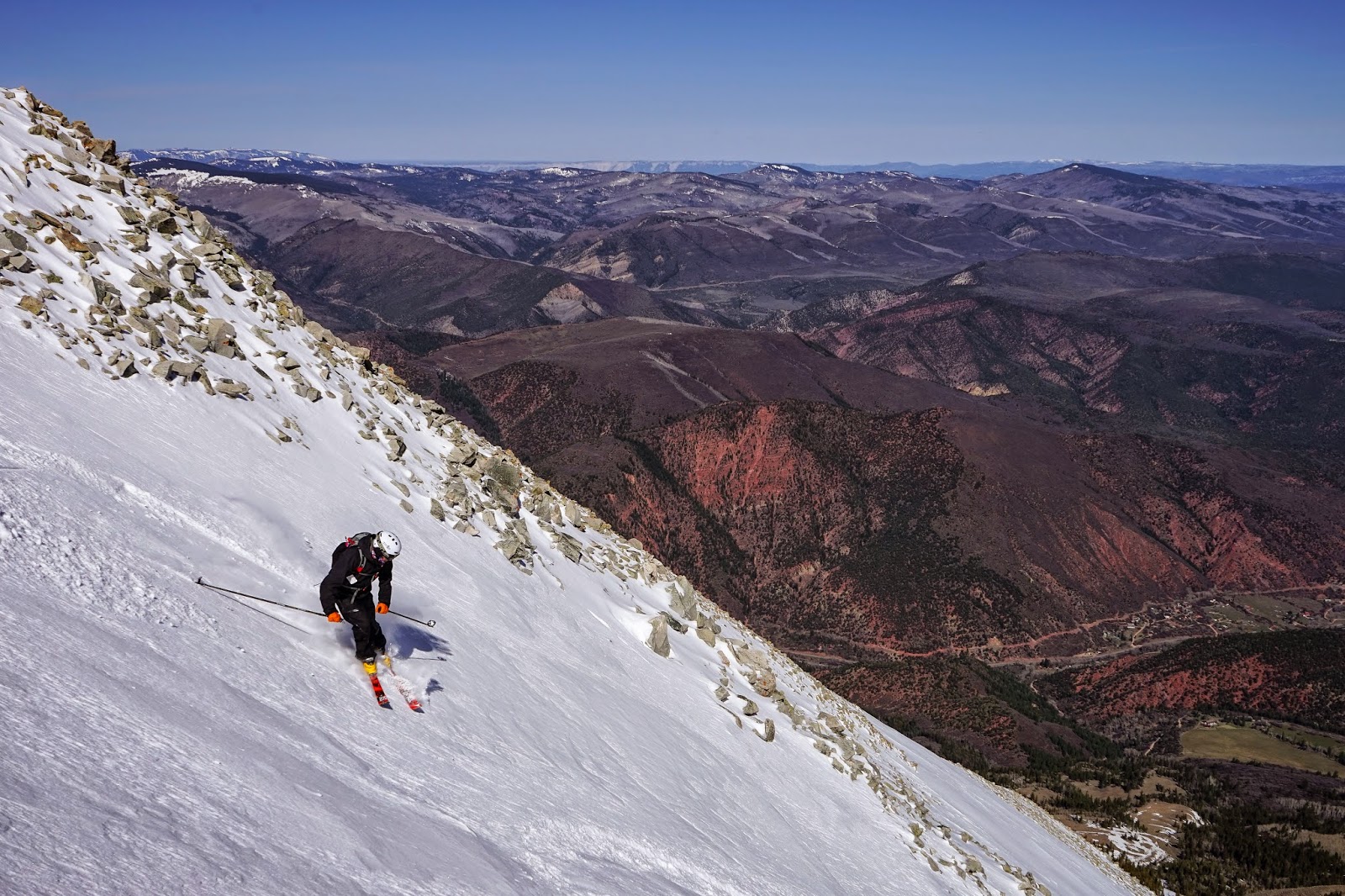 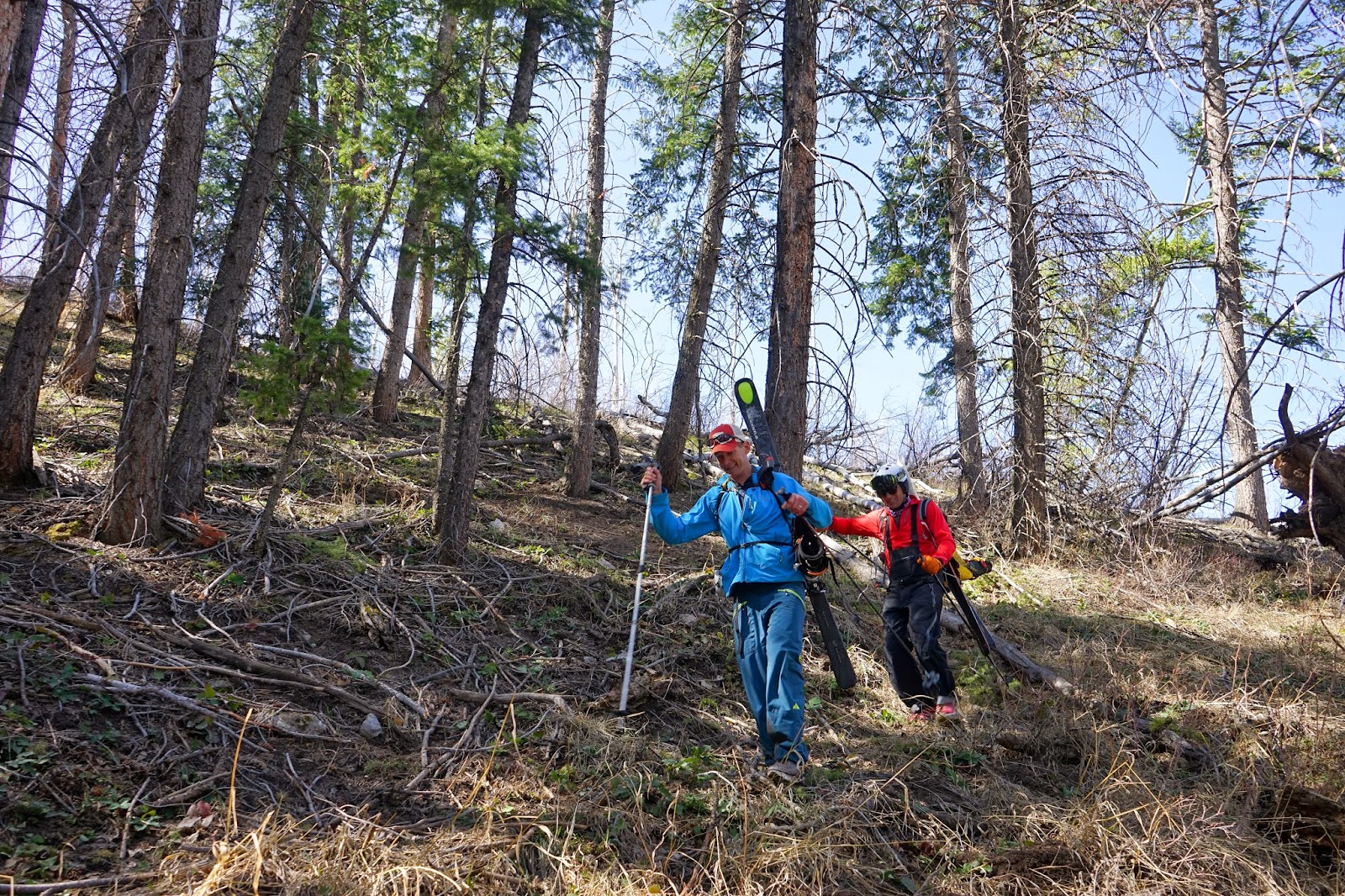