Since I hung up the skis in April (earliest ever) I have been dutifully training on the bike for a smattering of races, both road and mountain.  The season was mixed with some good results, some dnf's, and a couple unfortunate flats.  My best results seemed to come against people who didn't know they were racing i.e. Strava!

One goal for the year was to return to the White Rim in Canyonlands National Park and try to set the FKT for the loop.  I rode it last year with Tom, Jason, and Jason and felt like I could go a bit faster.  When trying to break a "record", it's good to know what that time actually is.  The internet could only tell me that Jeremy Nobis was suspected of having the record with a time of 6:10-20ish.

In early November, I got an invite from the Simmons boys and Paul Hamilton to try and ride to loop fast as a group.  We started at the top of the Shafer climb and rode counter clockwise, trading pulls until eventually I found myself off the front gunning for Nobis' time.  Bonking hard, I completed the loop at the top of the Shafer climb in 6:09.  I felt a little sheepish about calling that the "record" so I decided I'd have to go back and ride it solo.

A couple weeks later, a work window opened up and I made to solo drive down to Green River for a night at the Comfort Inn.  All too early, the alarm pierced through my ear plugs.  Packing up, I was anxious to get started.

This time, I parked at the visitor's center and rode down the Shafer switchbacks to start my loop at the bottom, climbing back up, and continuing counter clockwise.  I reasoned that it would be good to tackle the climb while fresh and then finish on the mostly "false flat downhill" towards the base of the climb.

It was a cool autumn morning in the desert and I was feeling fairly fresh in spite of the Grandeur laps that I'd been doing in preparation for ski season.  At the junction with the Potash Rd, I stashed a long sleeve jersey, started my watch, and set in for a long day.  It felt good to start climbing and even though I didn't have a power meter, I sensed I had good legs.

Hitting the pavement in 27 minutes, I was ahead of schedule and told myself to not push too hard so early.  I tried to stay steady until the Mineral Bottom Rd and then use the down hill treading section to maintain a high pace and get in some calories.  At the river, I found the road to be dry and even a little sandy which was not a good indicator of the conditions ahead.

At one point, I dropped a gel flask, thought about leaving it, but flipped a U to go back and grab it.  I figured the 30 seconds lost to do so would pay dividends later.  I was also glad to not litter.  I was not however, glad about the increasingly sandy road ahead.  The last trip with the Simmons boys held very little sand and was overly wet.  This day was the opposite.

Spinning out and wasting watts, I was a little bummed to be working so hard to be going so slow. My optimistic goal was under 5:45 but I was still going to be happy with sub 6 hours.  I could feel it slipping away in the sand.

Fortunately, I still had good power on all the short punchy climbs and didn't experience even the slightest cramping.  Maybe I'm getting better at metering these long efforts, or maybe it's the flask of pickle juice that I started nursing around the 3 hour mark?

Doing the math, I could tell that the last hour was going to be tough.  I needed to average around 17 mph to slip in under 6 hours.  I kept telling myself that I was supposed to feel crappy by this point compared to the last effort as I already had done the big climb.  The finish line was the outhouse by the Potash Road.

On the final rise, I laid down all my remaining watts, which by this point weren't that many. With a short and fast downhill to my finish line, I still had a couple minutes to spare.  I coasted with glee, glad to be done with the torture and stopped my watch at 5:59:30.  To my knowledge, that's the fastest complete White Rim, but as always there are a ton of people that could or maybe have gone faster.  It's a big claim, but I'm a big claimer so I'll take it for now.

Breathing a sigh of relief, I picked up my long sleeve jersey where I left it and started to cruise easy back up the climb to my car.  Within five minutes of soft pedaling, I was going cross eyed and bonking hard.  I got off the bike and laid in the dirt for a few minutes.  Somehow, in my excitement earlier, I forgot to stash any food or water for after the TT.

I alternated walking and laying in the dirt for the next hour and a half and finally, 1:54 after finishing my TT, crested the Shafer climb for the second time.  This "cool down" took significantly longer than the 27 minutes earlier that morning.  It also was much much more difficult and a fitting end to a painfully beautiful day in the desert.

My last ski day of the 2015/16 season was spectacular, albeit humbling.  Jason and I had plans to climb and ski Mount Owen via the Koven Couloir.  The day started somber for no reason in particular but both of us had a sense of foreboding that wouldn't lift until we eventually made the decision to go home.

Preoccupied with morbid thoughts, objective hazards grew in our minds and it felt kind of like I was walking through a nightmare even though this is a place I have dreamed of fondly numerous times.  With blistered feet, we made our way into the Koven and eventually onto the the upper snowfields.

The day was actually incredibly beautiful with swirling clouds flowing around the cathedral group but we were just now noticing it, having been stuck in our own heads thus far.  Normally, when one of us is out of sorts, the other will buoy the mood and all is good.  This day, at least until this point nearing the technical climbing, we were reflecting each other's moodiness.

The Koven chimneys are incredibly easy on dry rock but we suspected the summit would prove more challenging in winter conditions.  Fortunately, as we climbed, we both found ourselves enjoying the motion and setting enough that some legitimate psych started to creep in.  Jason took the first lead up a snow covered rock slab, scraping around and dispatching it without difficulty.  Higher and on the west side of the summit block now, I took the lead and began to feel quite lucky to be scrambling around in such an amazing position.  I heaved myself up the chimneys and onto the summit before laughing at Jason as he followed.

We high-fived on the summit and then got about the business of rapping down to our skis.  Immediately the buoyancy felt while climbing dissipated and I was once again consumed with thoughts of tragedy.  I pictured Jason falling to his death a thousand times.  Gravity was strong.

It's amazing how one's mood can affect their skiing.  Full of irrational fear, I skied poorly down the snowfields towards the Koven.  I tried to overcome this by forcing myself to ski the steep upper pitches but only succeeding in pulling out a small wind pocket that broke out at my feet.

I'd had enough.  I was going to down climb the upper somewhat wind loaded section until I felt better about the stability.  I then dropped a ski and watched in horror as it launched down the Koven.  Gravity was strong and I would now be down climbing 5000 feet to the car.

As if someone was just messing with me, Jason skied down and yelled up that my ski had stuck into a small snowbank on the side of the chute some 200 feet below.  Feeling redeemed, I gathered my equipment, and skied straight to the car.

As if someone was still messing with me, I discovered far too late that a small crash near Delta Lake must have claimed my iPhone from an open pocket.  It was a small price to pay for safe passage on my final ski day of the season. 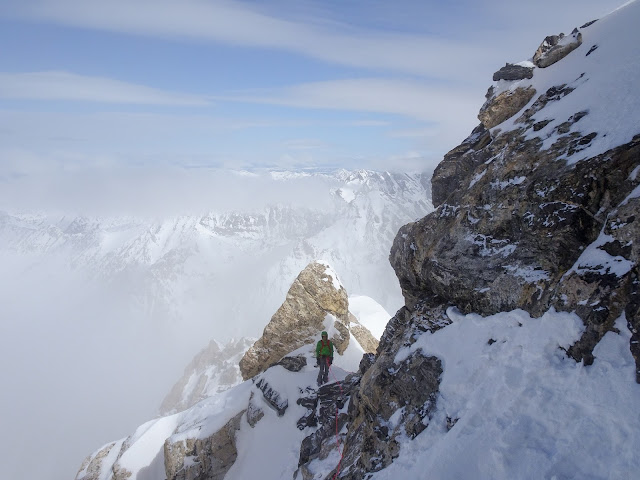 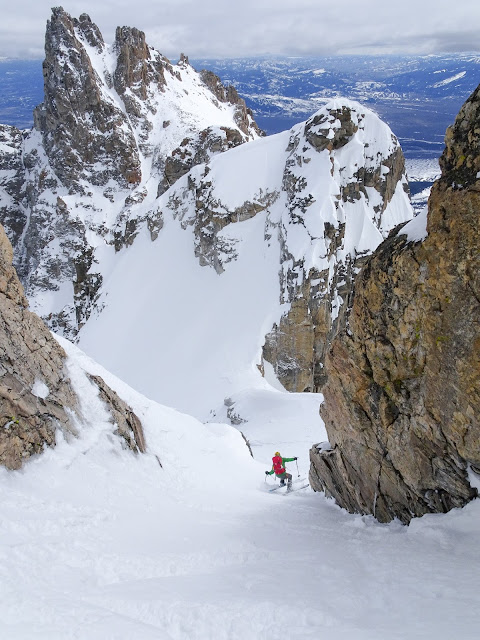 Last Spring in the Sierra

After the incredible day on Temple Crag, we knew we weren't going to top that with the two days remaining on the trip.  Zoomed in photos of the majority of our objectives revealed that the snowpack was just too beleaguered to be productive in the southern part of the range.  Hoping for some local's beta, we remembered that Dale Apgar was still in Bishop and he immediately dropped his plans for the day and took us on a tour up University Peak.

As always, the company was as good as the views.


The next day, we made the long slog over Lamarck Col to check out the Mendal Couloir on its namesake peak.  We were foolishly hopeful that it would be in condition (apparently this occurs a few times a decade) but wisely had planned other options in the area.

From the col, I could zoom in with my camera and it was obvious the Mendal was in better climbing condition than skiing.  Mounts Darwin and Lamarck made for fine alternatives. 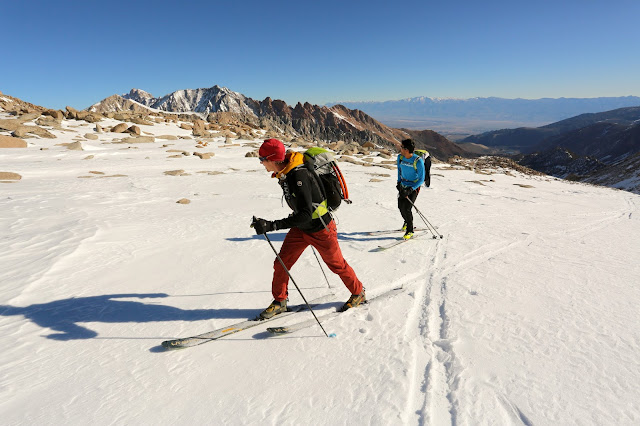 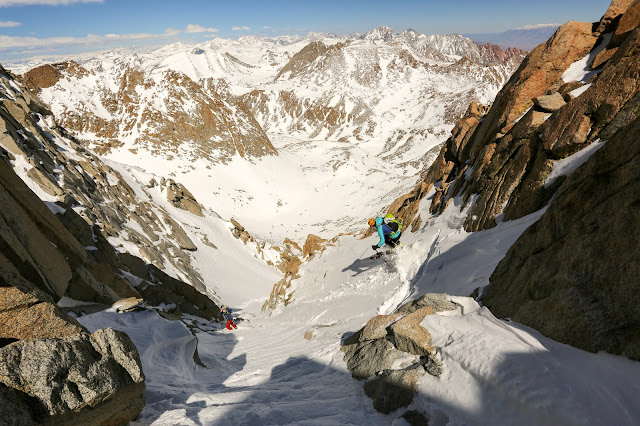 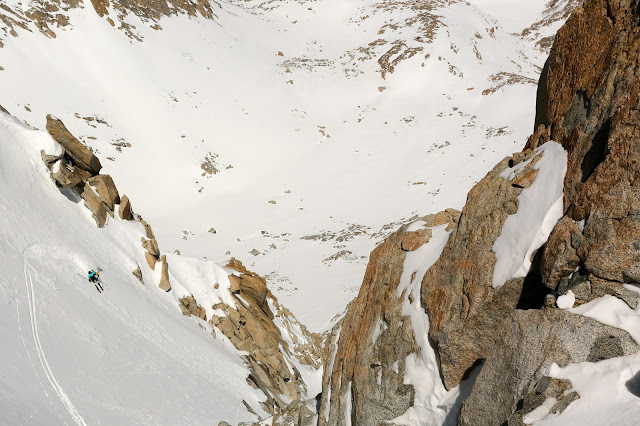 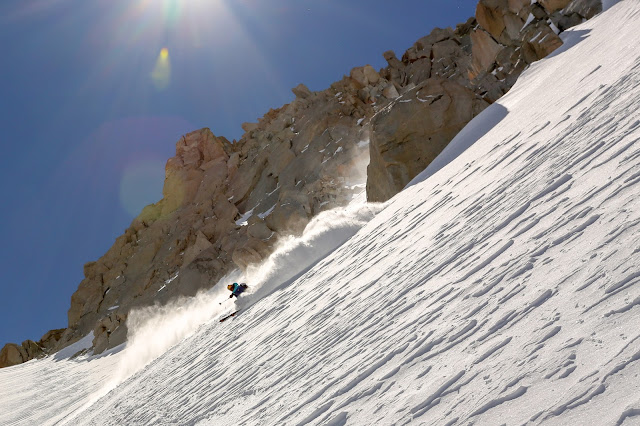 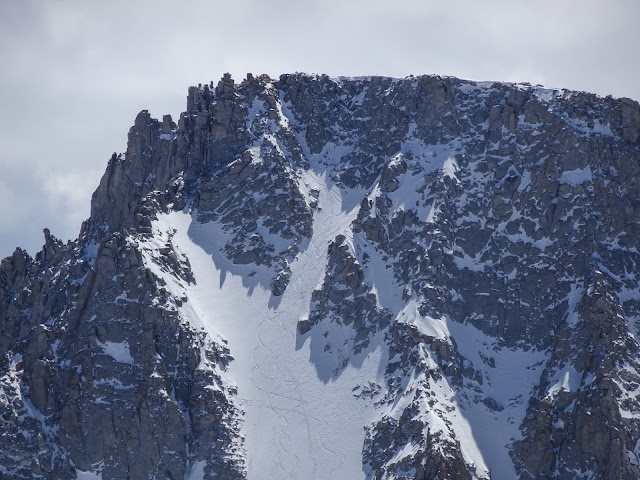 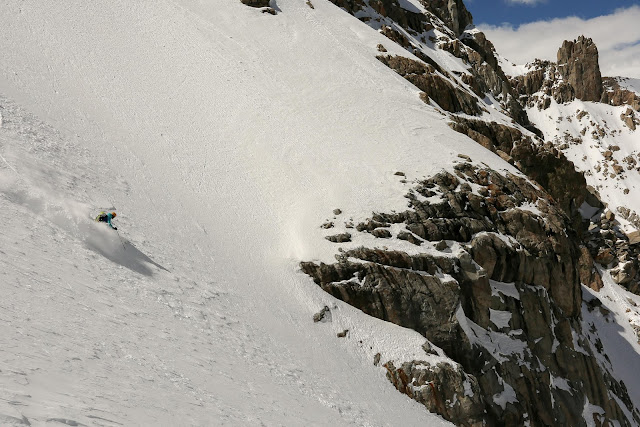 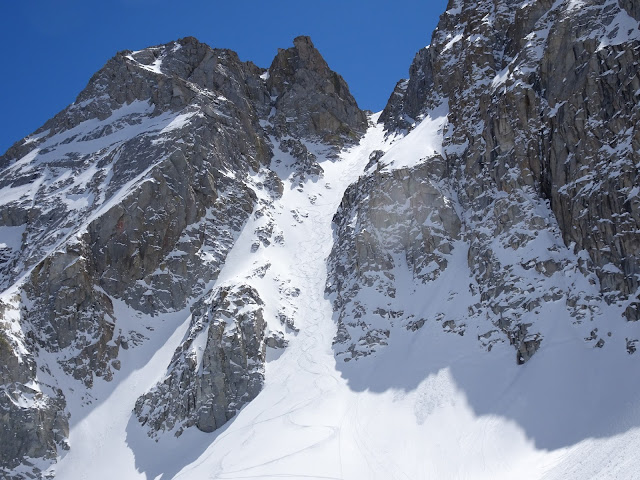