I'm off Nebo and back on Timp. 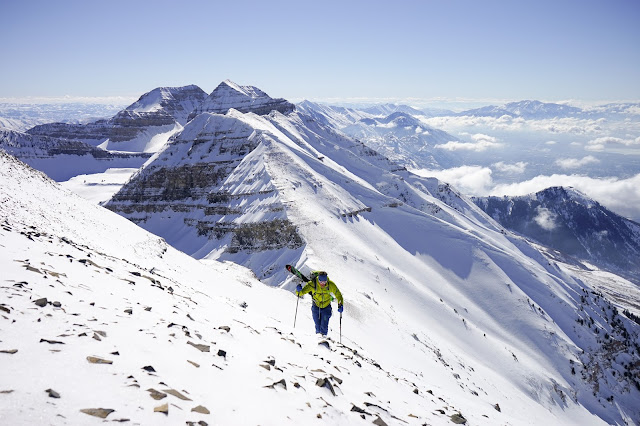 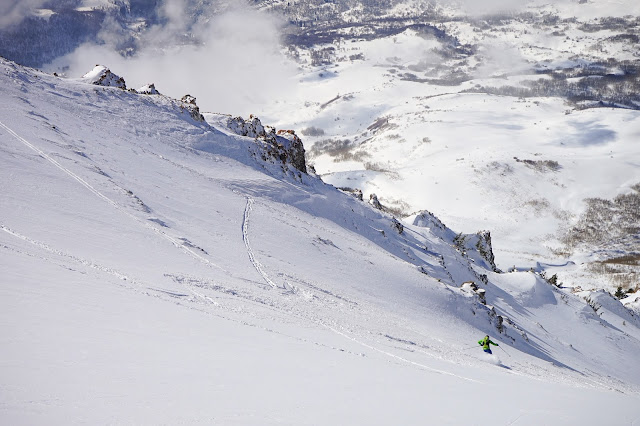 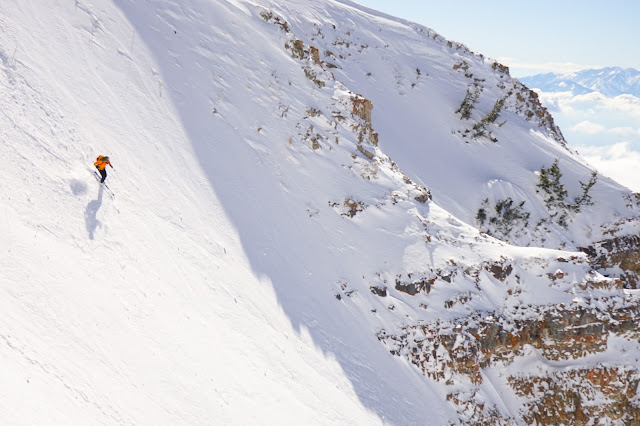 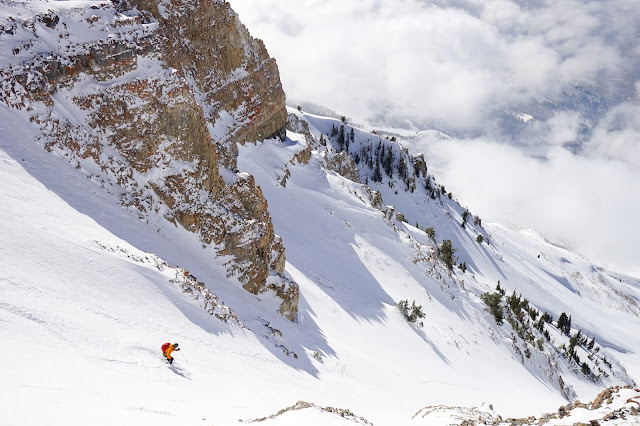 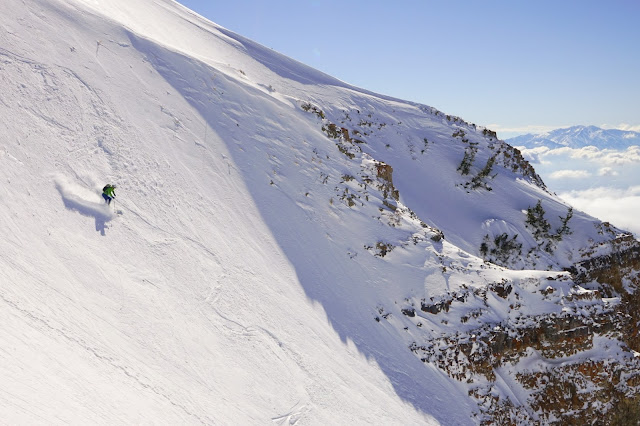 Posted by SLC sherpa at 5:17 PM No comments:

Noah, Jason and I went up to climb the North Ridge of the Pfeiff again in an attempt to escape the heat and the funky snow down low.  We thought about skiing the NE or NW or some of the other adventurous routes on the peak but after a thoroughly enjoyable scramble, we were content to ski the East Ridge as it held the most appetizing snow.

It turned out that with 50 mph gusts from the south, the North Ridge was the perfect choice for the day.  We were totally sheltered until the final steps to the summit where we were almost blown back down whence we came. 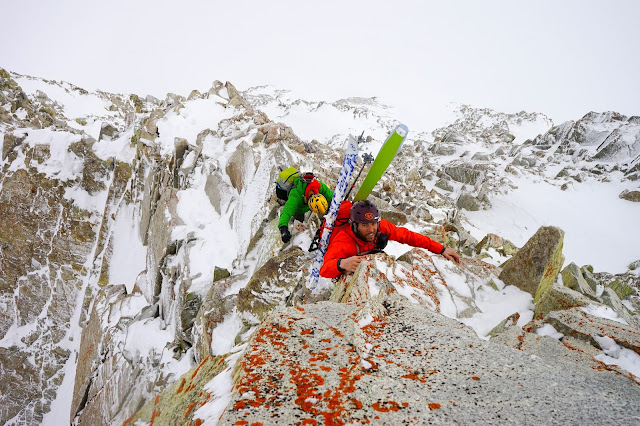 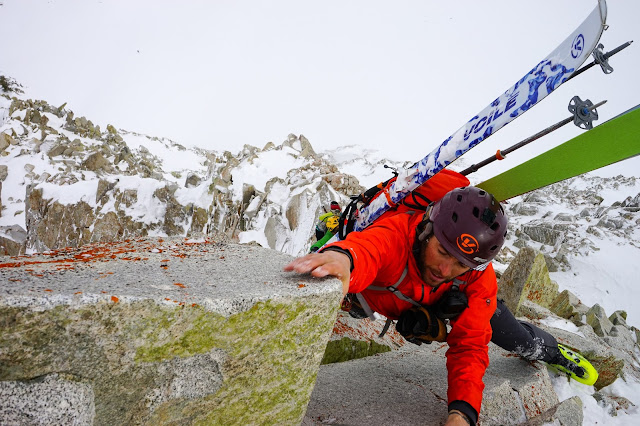 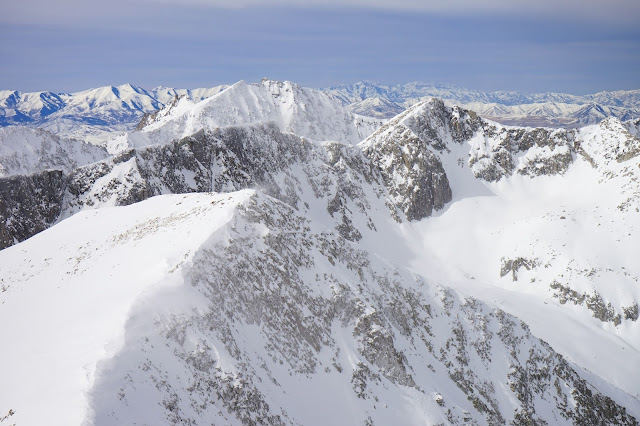 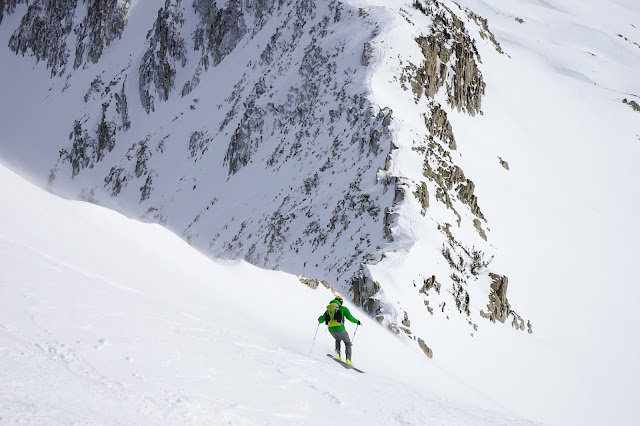 Last week I mentioned on Instagram that Mount Nebo might be my new favorite peak in the Wasatch.  The prolific Derek Weiss commented, "Nebo is the new Timp.  Timp is pissed!"  Trying to keep all the ladies happy, we went and gave Timp a little attention, first on the south end and then another day on the north end.

From Provo Canyon, we fought the scrub oak until finding clean passage through a chute to the long ridge above Lost Canyon.  By this time, the day seemed to have gotten away from us and we bailed on grander plans to ski some corn, then some mank and then some shrubs before walking back to the car.  A nice meal at Fong Asian Diner completed the morning. 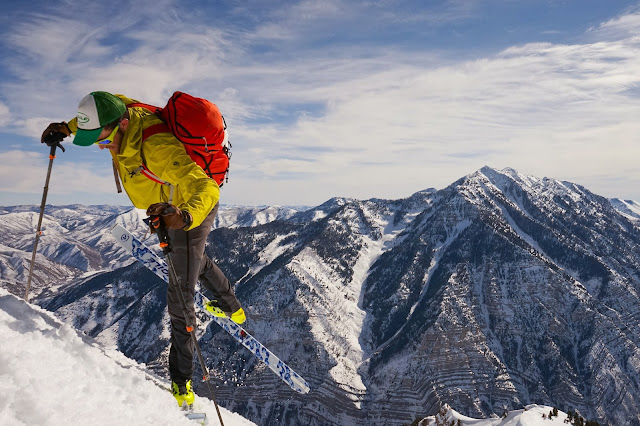 Early this week, we had plans to ski some low elevation lines but with the recent warming making everything too sloppy, we made a semi early start from American Fork Canyon.  Intent on skiing something on the north end of Timp, we skinned forever on the flat road before being drawn toward the Grunge.  Plastered in rime, there was no way to pass it up.

We climbed the nice access chute to the top of the huge Grunge apron before getting a little spooked by some huge wind slabs and the massive cornice guarding the top of the chute.  We turned it around and capped the morning with a nice lunch at Thai Basil in Cottonwood Heights.  Live to ski. 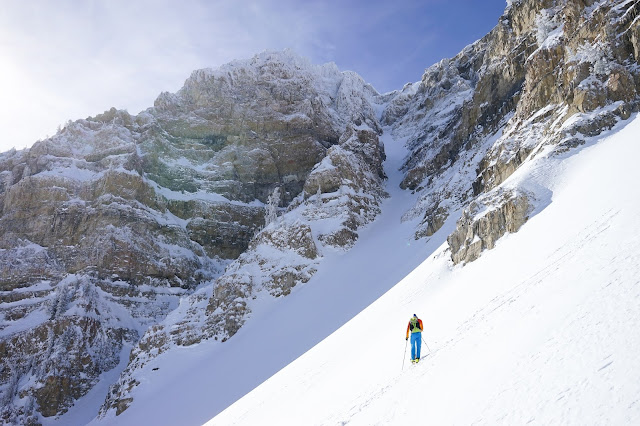 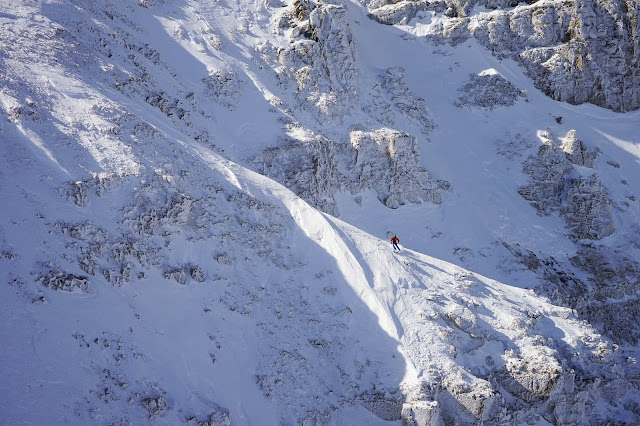 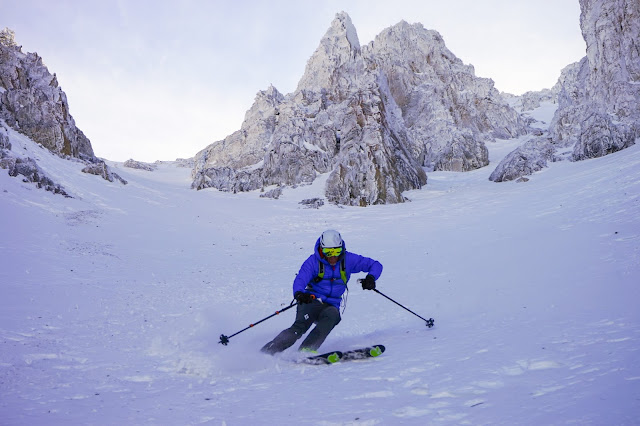 Posted by SLC sherpa at 2:10 PM No comments:

The Storm Drain - A Wasatch Classic

They say emulation is the highest form of flattery.  Well, last Saturday, Bart, Lars, Jason and I decided to follow in the ski tracks of Noah, Ben and Matt to see if their new line on Storm Mountain was worth the hype.

Like most of us that are into this sort of ridiculousness, I have stared at Storm Mountain while driving down Big Cottonwood and always wondered if there was a secret passage down its imposing northeast face.  Others have tried and apparently, a guy named Bill Hunt, who was WAY way out there in the late 90s made a similar descent on a snowboard...SOLO!

On Thursday, I skied with Noah on Timp.  On the drive home he mentioned he was going for the NE Face with Matt Primomo on Friday.  I was working so wished him luck and Jason had a date with another guy back on Timp.  We anxiously awaited the updates.

We didn't have to wait long as with the crazy technology of iPhones and the LTE service now available all throughout BCC, the guys were "live gramming" their descent.  At work, in between patients, I found myself sneaking out my phone to see their progress.  Photos from the summit, at rap stations, and skiing steep chutes started trickling in.  The final one of the guys at Lone Star mowing on tacos was the kicker.  I now had plans for Saturday.

Originally, we had planned on heading back to Utah County but worked up in a frenzy about the Storm Drain, gathered some tat and cord and rallied up Ferguson before sun up.  In my mind, I envisioned a dozen other parties vying for a possible second descent and the paranoia was high.  Pulling into the Ferguson parking area without any other cars present, I had a huge smile the others couldn't see in the dark.

The trail up Ferguson is steep and slick but we made it unscathed, except when I nearly knocked myself out with my pole.  Blowing snot rockets with a pole in the operating hand is dangerous while walking through a forest.  The tip of the pole (which was pointed straight out) hit a tree and jammed my hand into my eye, which is now slightly blackened.  At least it made the others laugh.  Otherwise, out of the inversion and into the light of day, we were pretty psyched to make quick travel on the other guys icy skin track.

On the summit in 1:30 or so, I suggested that once we got out of the drain, we link up Stairs for a BCC All Star link up.   It all seemed so possible.  Then we started skiing.


Dropping off the summit, the slope angle was dramatically different from our ascent route.  It still felt somewhat careless since we were following the other's tracks but an estimated 50 degrees above big cliffs kept our attention.

We were all surprised by how far we actually skied before we reached the first rap station.  We were also really surprised by how steep the whole line felt.  Looking down, it felt like the road was right below us instead of off in the distance as we would expect.

The upper chute was soft but the snow was a little funky having set up a bit from the descent the previous day.  Things got really funky when we came upon a little ice bulge just above the first rap station.  For the bold, it's just a little air.  But, coming immediately above a two hundred foot cliff, we all lacked the gumption to go for it.  Side stepping over ice and slab, we each made our way through safely.  Lars brought up the rear and we warned him that with all the snow scraped away, it was getting more difficult with each passage.  He opted to grope some trees on the way down instead.


We rigged the ropes and sent Bart down to find the next set of anchors.  Armed with Noah's beta, we figured this would take about 45 seconds.  About 45 minutes later, Bart had scrambled back up enough to safely go off rappel while I came down to look above his position, thinking he had simply missed them on the way down.  En route, I found a decent tree and set up a mid mid station rap.  Turns out our static 5 mm cord didn't stretch the extra 10 feet needed to reach the actual mid rap station.


But once we got to the actual mid rap station left by the other guys, we once again were surprised to find a hanging stance with a little cave.  Fitting four guys and gear on one sling and in the cave was like playing twister with man parts and skis.  Eventually we untangled ourselves and resumed skiing.


This hanging ramp, separated by the two chutes by rappels was one of the best parts of the line.  It's only a couple hundred feet long, but it's steep and we really felt like we were in the middle of a good adventure by this point.

Hitting the snow after the third rap was joyous.  We could suddenly ski with more aggression and quit worrying about rope length and falling off of cliffs.

This last chute was actually quite a bit longer than we all anticipated and by the time we hit the road, we were all a little bit late getting home.  Well, some of us were very late and others just slightly annoyingly late.


I have to credit Noah Howell, Ben Peters, and Matt Primomo for not only coming up with a really adventurous line right in our backyard but also for freely sharing the beta and providing a wonderfully steep skin track up Ferguson Canyon.

Noah called this an instant Wasatch Classic and it most definitely is.  That is, if you are slightly deranged and your definition of classic is more synonymous with crazy!

We loved every second of it.