I had a day off of work and was fiending for some excitement.  Luckily, I know a few other addicts who happened to be available for a rowdy ski trip into Garnet Canyon in GTNP.  I say rowdy because there really isn't a lot of snow up there, but we were going to find some skiing anyway, regardless of the conditions. 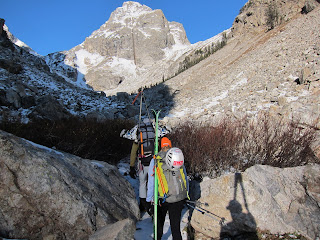 Jared and I left SLC Wed evening and made it to Jackson without getting pulled over. We tumbled into the Professor's house, where he had set up the hide-a-bed.  Jared was against sharing and inadvertent cuddling so he took the floor (this would change later).  First the Dutchman, and then the irrepressible Kim Young, showed up on Brian's door in the morning.  We were to be a crew of five searching for elusive October powder.
We started just after 8:00 down the Lupine Trail, half jogging to warm up.  In the parking lot, the temperature was in the 30s and we were all chilled, wearing our standard lycra.  An hour and a half later, we strolled through the Meadows and sat down to exchange running shoes for ski boots.  The lower angle fall light and the crisp autumn temperatures aided our gleeful mood as we sat in the snow dusted talus debating our next move.  All eyes were drawn upward by a swath of white coming out of the West Hourglass Couloir that looked skiable.
What we found was boiler plate through the lower section, which inspired us to don our crampons, then a brilliant slope of creamy powder, before the upper stretch of rock strewn, wind scoured, alpine ice/névé.  Curious, we pushed to the top since Jared and I had never been there before.  Looking over the South Fork of Garnet Canyon, the mountains felt large.

Waiting to regroup, we put on all available scraps of clothing in a futile attempt to stay warm.  With the wind chill hovering around zero, I was wearing two puffy coats over two smaller jackets.  Jared was a little worse off and now was more than willing to cuddle to stay warm.  Kim nearly threw up from the pain in her hands as she topped out the couloir.  I think Nate and Brian were unfazed as they looked at us with pity for being so weak.
Motivated to get moving, the group down climb ensued until we were back on reasonable terrain to start skiing.

Once we finally put our skis on, we found what we were looking for...


...better than expected skiing with a bit of dry powder to sluff around.  Then we hit the lower slopes which, being less protected, were bullet. No matter.  Everyone was smiling and commenting about how enjoyable the skiing was. Carefree, and unfettered by thoughts of the world below, everyone was easy as we moved towards the Middle Teton.
Jared sped away, skinning the glacier while the rest of us pursued "Teton Style", trudging upwards with skis on our backs.  It seems backcountry skiers in the Wasatch prefer to keep their skis on their feet and skin as much as possible.  I do.  Jared does.  We both feel it's more efficient and quite possibly faster.  Wasatch style or Teton style? Which do you prefer?
Initially, we thought we might be satisfied with skiing the lower glacer, but the allure of steep powder plastered to the upper couloir proved too much.  The slope angle came in at 51 degrees, and no one could believe the mid winter conditions.  We were about to make turns in stable powder on a steep classic line in the Tetons, in October.  It was perfect.  As we topped out the couloir, we found ourselves standing at the notch between the Dike Pinnacle and the main summit of the Middle.  The air was calm and the autumnal sun was enhancing all the colors around us.  Even Jared seemed content to absorb the view as he shelved the idea of going to the summit.

Unfortunately, the facade of winter ended while still well above the Meadows as we eked out the last few meters of turns.  With the pyramidal shadows stretching past the Snake River, no one seemed bothered by the inconvenience of hiking as the mood remained elevated throughout the 4+ miles back to the trailhead.  For nearly 8000 feet of climbing, everyone looked pretty spry back at the cars.
Back in town, we exchanged quick good byes with our Jackson buddies and  then made the well familiar drive back to SLC, only getting pulled over twice.
When's my next day off...?
Brilliant home movie pending...
Posted by SLC sherpa at 1:35 PM 3 comments:

Over the weekend, four of us eschewed the perfect climbing and mountain biking and made an ill advised trip up Baldy for another look at the main chute.  The weather was warm and the snow line was hundreds of feet higher than just the day prior.
No matter.  The leaves are turning and it was one of those Autumn days that make me never want to return to work again.
The pics (all by JD):
And just for the fun of it, we made a video of the day filled with horrific skinning and skiing.  The music is by Cedar Wright and fits the carefree mood of the day.
Although always worth it, I don't think I'll ski again until we get some more snow.  And unfortunately, the forecast is grim...sunny and 60 all week.
Posted by SLC sherpa at 12:29 PM 1 comment:

Movie Madness: The Grand Canyon and Mountain B Sides

I have no future in cinematography.  But, making movies is fun and here are my two latest efforts.  The first is a nauseating 5 minute ensemble from my recent R2R2R run in the Grand Canyon and the second is a collection of "B sides" from my video library.  Most of the clips from the B Sides movie are from last winter but a couple are from this summer and our attempt at the WURL.  I also snuck in a few recycled favorites from prior posts.

Mountain B Sides from andy dorais on Vimeo.


Continuing the theme, it really has all started again with today being our third on skis.  The loose powder has settled nicely and what you see is what you get...  I still manage to hit plenty of rocks though.
Posted by SLC sherpa at 2:39 PM 3 comments:

I was at work this morning when I received a picture text of alpenglow on a snowy Mount Superior.  Jason and Jared were trying to push my buttons.  Off around ten, I rallied out of work and convinced JD to head back up for more "first turns" of the season.  He protested that the skiing really wasn't worth it.  Isn't it always worth it?