In the movie Steep, I believe it's Lou Dawson who says something like, "You go to the mountains and partake of their good tidings and sometimes, you come home feeling blessed." For the first eight hours yesterday, I felt that's how the traverse/peak enchainment would end. The terrain was absolutely stunning and the skiing more than adventurous.

I met Bart and Jared at 2:00 AM at the BCC park n ride and we were skinning from the s-curves towards Broad's fork around 2:15. It was warm and moonless, but we could see the peaks above in quite some detail as the city light was magnified by the thin high clouds. Recent glide avalanches had left devastating debris piles through Broad's, which we quickly put behind us in spite of difficult travel conditions. There was a partial freeze at best and the surface was breakable. However, once at the Dromedary/Twin saddle, we were on familiar ground and made quick time through the rock step and up Twin's East Ridge. 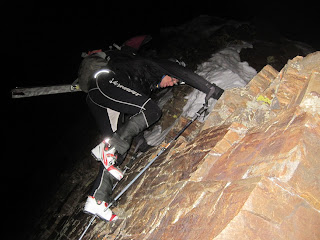 Summited Twin exactly 3 hours after leaving the cars, right on our projected pace. Bart and Jared had put a ton of thought into the gear and did a great job modifying the Dynafit Low Tech binding to make climbing easier. They also put some thought into lighting and, voilà 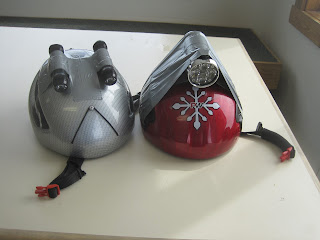 I used the one on the right. It weighs a ton but is like a car headlight. Still, simul-skiing back down the East Ridge with Bart while Jared's light bobbed in the distance was pretty eery, especially since we knew cliff bands were out in the blackness on either side. While dark, I felt like a trespasser. Like the mountains barely tolerated our passage.

Here's a pic from a week ago to show our path. From the saddle in the bottom right, we worked south, around the back of the first peak, booted to it's summit, skied down to the saddle , and then skinned up the West Ridge of Sunrise (peak on left). 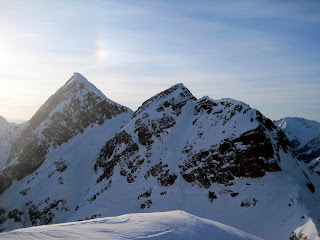 Night eased into dawn as we were booting up the unnamed peak.

From the summit of Sunrise. Dromedary immediately east with Monte Cristo in background on far right. 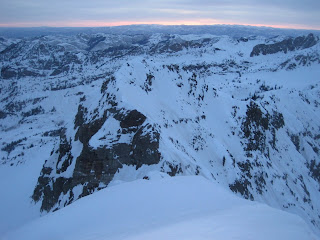 The probable skiing crux of the day was the descent from Sunrise to the saddle at the top of Tanner's. We moved a couple times to the north or south, but mainly stayed right on the ridge line. It truly felt like "you fall, you die" terrain and I was at times, terrified. Not much to do though but keep chasing those guys.

A look back at the descent on the East Ridge of Sunrise. 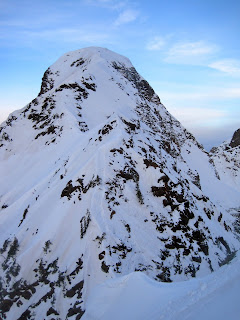 Bart on the last bit before the saddle. Steep. 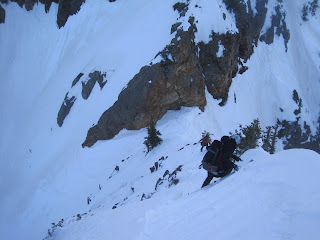 From here terrain mellowed slightly and the trip up Drom was a bit faster. We were moving well with the perceived crux behind us and I was hugely optimistic about our chances. Everything was beautiful. 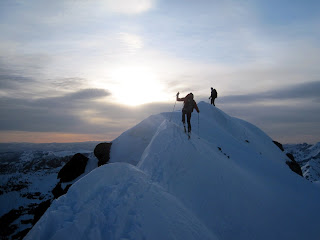 A look back again at Twin and Sunrise 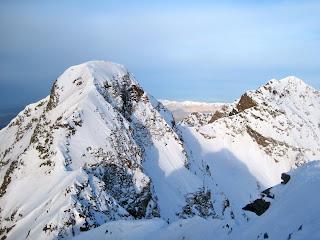 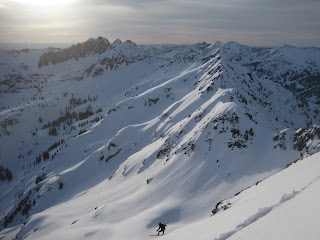 We zipped down and around the Sundial and worked our way up into the bowl north of Superior/Monte Cristo. On the way talking about staying on the ridge line longer to be able to ski the sky ramp and then using the Heart of Darkness to access Monte Cristo. Guess we'll have another chance to talk about that one.

Bart and Jared with MC and ramp in question in background 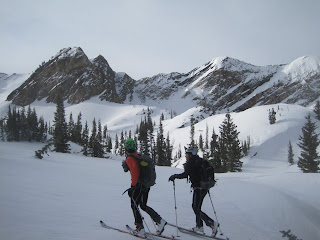 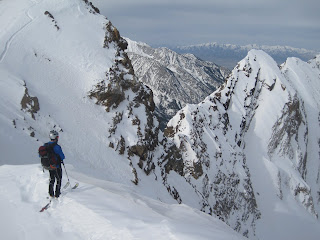 We tagged Monte Cristo then dropped off Superior's South Face and walked over to Alta where part II of the trip would begin. At this point it was just after 10:00 AM. A number of mechanical failures (the cord on my boots broke, I lost a basket on my whippet, I lost a lens from my sunglasses, I lost a ski while skinning) and poor snow for travel and skiing had probably taken their toll but I was still psyched. I could feel the fatigue beginning to mount, especially on steeper climbs, but we were going to make it.

Then, all momentum was lost. An Alta mountain host lady caught us skinning up towards Sugarloaf and ordered us to turn around and move out of bounds. A total of 30 people were skiing the whole mountain. We pleaded our case, but she threatened to call police and patrol and wouldn't budge until we turned tail. She was mean. This turned a 1.5 hour climb into a 3 hour climb as we skirted out of bounds toward Catherine's area and then stole back in, traversing under the Castle, hoping the rock would help conceal our presence. 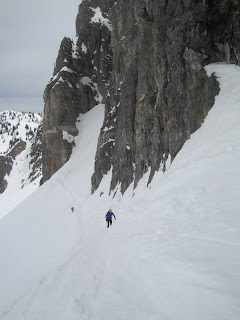 At Hidden Peak, we pleaded with patrol but they said come back tomorrow cause they'd be open then. We didn't even want to ski back into their areas but...closed. It would have been too dangerous by this time to wrap south, losing tons of elevation and then try to ascend the Twins. Alternatively, too stupid to head down to Scottie's losing thousands of feet, only to head back up to the Twins. In essence, we were stopped in our tracks by people who can only follow irrational orders and not make reasonable judgements on their own. The morning was a blessing, the afternoon a curse provided by the corruption of man.

I don't know if we could have finished the route if given free passage. We were starting to get tired and it would have been an epic death march out Bell's, in the dark. I'd like to try it.
Posted by SLC sherpa at 8:55 AM