The Line Has Been Drawn...WURLOS Over*

We played Pachinko again yesterday. We were gunning for a ski version of the WURL, a line drawn by Jared, that we then drew in our minds, and then drew with our tracks. We altered the original WURL, preferring major ski descents like Superior South Face over traversing Patsy Marly, and completely avoided Alta (because they aren't friendly to skiers).

Start at S-Curves, up Broad's Fork, up Bonkers to Twin N. Ridge, ski Twin East Ridge, up Sunrise, ski Sunrise E. Ridge, up Dromedary, ski Drom E. Face, traverse above Sundial, ski an access couloir to Heart of Darkness, up Heart, up Monte Cristo N. Ridge, over to Superior, down South Face, to tram deck at Snowbird for gawks and laughs, up to Baldy (Jared only), Hidden Peak, AF Twins, Red Stack, up north facing couloir on Red Baldy, traverse ridge to White Baldy, ski NW Face down to ridge at head of Red Pine Drainage, traverse over to Pheiff, ski Southwest aspect of Pheiff, traverse down into Hogum, up to saddle between Lightning Ridge and Chipman, up and down Chipman N. Ridge, out Bell's Canyon to car.

There's an asterisk in the title because Jared's line included Big Horn Peak and Lone Peak. The WURL does too. But for now, the WURLOS is over, at least for me...at least for this year. I'll try to explain.

We dropped a car at Bell's, drove back over to the S-Curves, and were skinning at 5:22 AM. All of us felt energetic and positive relative to our first attempt. We skinned into Broad's with views of the high peaks as it was getting light and it was decided that the most direct line up the Twins would be to take Bonkers over to the North Ridge and go from there. I was wary of the new route because we'd been up the East Ridge twice, and knew what to expect. 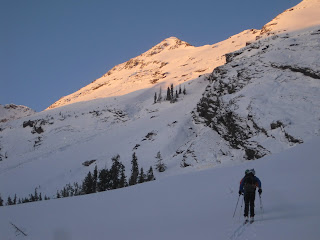 Jared thought the N. Ridge would be faster...and he was right, for him and Bart. They topped out marginally faster than the other way and had more fun on the new route. 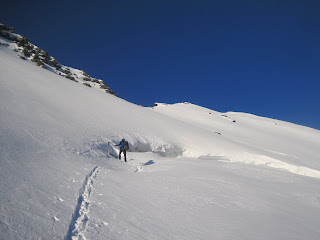 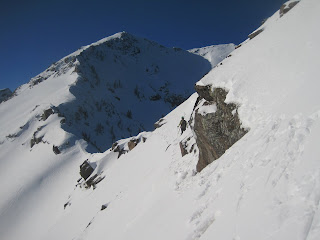 But for me, it took marginally longer with significantly more perceived effort. I looked at my watch as Jared topped out and arrived 7 minutes later. Bart had probably been there 15 minutes or more. I wallowed in rotten snow, post holing often. My early high spirits turned sour and I switched into survival mode for the rest of the day(s). I've been battling a cold all week and wonder if it contributed to my bewildering state of fatigue. Serious thoughts about bailing so as to not hinder the others were entering my mind early and often.

Nearing the summit of Dromedary 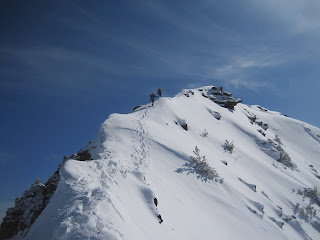 Jared was Jared. Fast, efficient, and brutal on the descents. He battled some allergies and seemed to have lost liters of fluids out of his nose, but was solid as always. And Bart, he was as strong as anyone I've ever seen in the mountains. He put in booter after booter, never complained, and let me follow all day. Jared would often surge to the front as well doing his fair share. Me? I led for maybe 25 steps over 21 hours.

Last attempt we dropped around the Sundial and then skinned up to Monte Cristo. This time we took a more direct line down this little couloir. 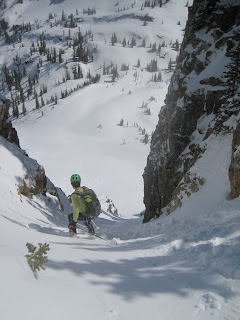 And then up the Heart. 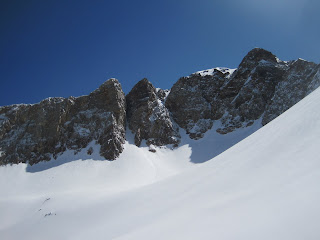 Got a good look at the sky ramps, which could be incorporated into our line. 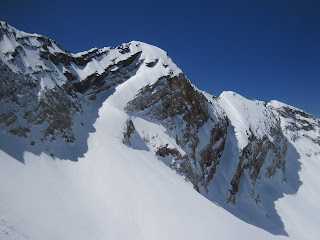 Jared topping out the Heart of Darkness. 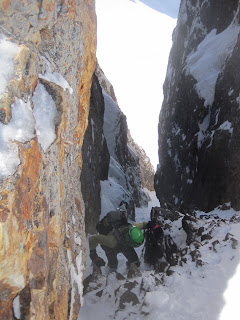 A really difficult scramble through rock and rotten snow up the N. Ridge of Monte Cristo led to the summit. 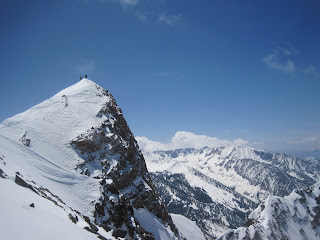 Superior S. Face was great buttery skiing. We were worried it might be too hot and late in the day as Jared kicked off a small wet slide. Its OK though, his brother Sam says wet slides are nothing to worry about. In fact, Jared said not to bring avy gear at all since it was a spring time tour. He meant shovels and probes but Bart and I left it all. Not too comforting since we were setting off small but very manageable slides all morning in the new snow.

We were again, the butt of many jokes as we lounged around on the tram deck taking a break. 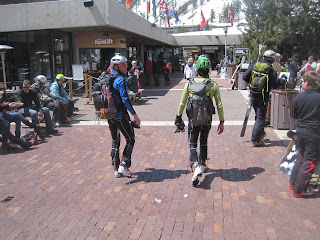 We got separated heading up Snowbird and Bart and I ended up waiting for Jared at the Warming Hut on Hidden Peak for quite a while. Eventually, Bart stepped outside and saw a lone figure on the summit of Baldy. We had figured that since both Baldy and the Twins were closed, we'd save our run in with the law for the big one that counted and went straight to Hidden Peak. Jared on the other hand, blasted covertly through the trees to the summit, to tag it for the group. Which brings up the topic of Snowbird policy and the ski patrol. Yesterday, they were cool as hell. They told us we could stay in the hut as long as we wanted even though they were closing soon, and that if we were leaving the resort, they couldn't care less where we went. Stark contrast to the skier hostile monsters at Alta. 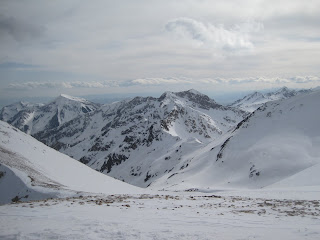 Looking back at Red Stack, Bart took the super cool ramp down the ridge. 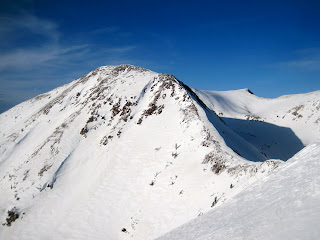 We were losing daylight fast as we summited White Baldy. It was a beautiful crisp evening. Too bad I was losing my mind after 16 hours of exposed scrambling and skiing.

Nearing summit of White Baldy with Lone Peak way out in the distance. 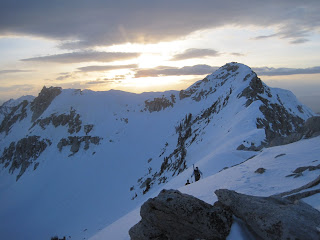 A couple looks back at where we'd been. 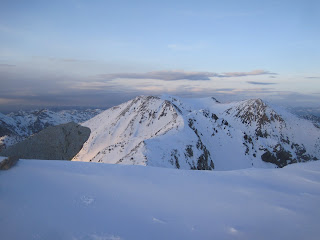 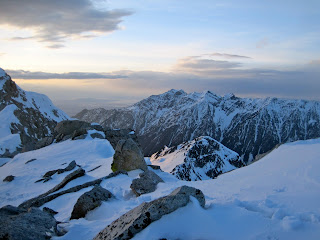 In the waning light while crossing yet another knife edge ridge, I was pretty sure I'd try to make it up Chipman and then descend out Bell's and let the others go on to Big Horn and Lone unfettered. Pretty sure, but not sold. I brought it up with Jared and he just said, "Be Strong."

The moon was bright enough to cast a shadow, and sitting on the Pheifferhorn at 9:30 PM, the view was sublime. We donned our massive headlamps, and skied/traversed down into Hogum. While Bart was putting in yet another booter, clouds started creeping in and a few snowflakes drifted by. Chipman is a 15 minute ordeal, but in that time, the snow started falling harder and we noticed the summit of Lone Peak being engulfed by clouds. We traversed north seeking passage to Big Horn's East Ridge, and while doing so, became swallowed in clouds ourselves. The visibility went to near zero and my struggle to decide whether or not to continue became a moot point. Jared and Bart reluctantly gave up on the last two peaks but I have no doubt they could have continued on if the weather hadn't made scrambling around with thousands of feet of exposure too dangerous.

We stopped midway out Bell's to brew some ramen noodles and then limped out twenty one and a half hours after leaving the car. Making it possibly the longest single push without sleep I've done to date.

So did we do the WURLOS (Wasatch Ultimate Ridge Linkup on Skis)? I'm not sure. We did ski over 16,000 vertical and cover close to 30 miles while climbing and skiing some of the gnarliest terrain in the Wasatch. We linked up 13 named peaks over 11,000 feet, ate a lifetime's supply of Gu and Snicker's Bars, and learned a lot about what we can do on skis. As far as I know, this is the first time this line (an approximation of the Cottonwood Ridge and the Alpine Ridge linked, in a day) has been "completed" on skis. There's room for improvement in skiing the last two peaks, style (completely self supported except a snack and water at Snowbird), and the time it took. We could stay more on the ridge, tag more peaks, or do more descents. That's the beauty of Pachinko though, the only limits are one's imagination to see the lines and possibilities in the mountains.
Posted by SLC sherpa at 12:51 PM