Casey and I were driving to the canyons today thinking we might go find the Hallway or meet some people at Scottie's, but huge bolts of lightening suggested we stay off the ridges. For both convenience and to satisfy and exploratory itch, we went up to Neff's Canyon. The idea was to relax and play it safe, doing some laps in the trees. We went straight at the fork since neither of us had been up that way before.

Once out of the luge track and above the scrub oaks, the graupel started to rain down, funnel off the rock above and made cool little rivers that washed over the skin track.


The snow really reminded us of that fad ice cream place "Dip N Dots" and since we are both suckers for ice cream we figured we'd spray some Gu on a little graupel cone. 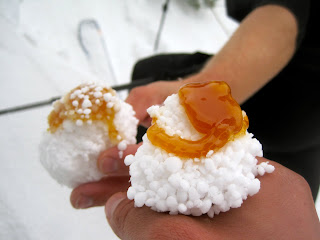 Delicious! Probably the only way to eat Gu from now on.

Once hiking, we were interested in finding the Apollo Couloir since the weather was mellowing out, but we soon realized we were in the wrong drainage for that. And, the skin track was conveniently taking us toward the Memorial Couloirs, lines I had wanted to ski for a while. The track quickly became hard to follow and so Casey, the LPB/PG (acronyms for his vile nicknames - you'll have to ask him), graciously put in the track a good 1000 feet. At that point, the couloir chokes down and the previous party had put in a booter that was now filled in. I opted to skin it, because to butcher a quote from another blog, "Because we can, and booting couloirs is unelegant." 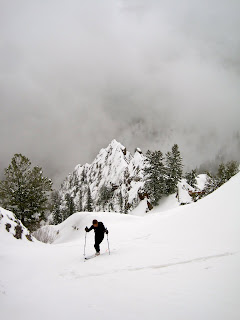 We were a bit concerned about the stability, but about a hundred quick hand pits, a bit of stomping on wind drifts, and realizing that the other side was a big cliff allayed our worries. Of course, the good visibility and hint of blue skies couldn't last. Here's Casey just below the top. 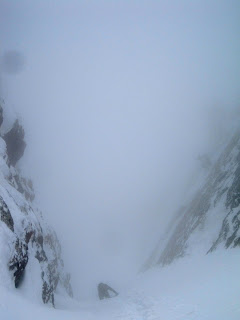 There are a number of great looking shots in this area, all designated the Memorial Couloirs. The fritzrips blog has a great post about them. We skied #4. 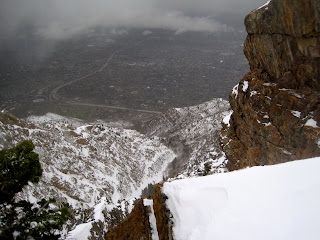 The LPB at the top of Couloir #4 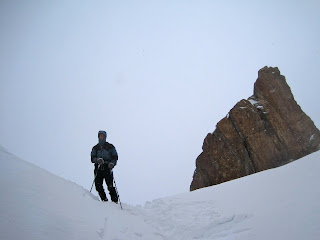 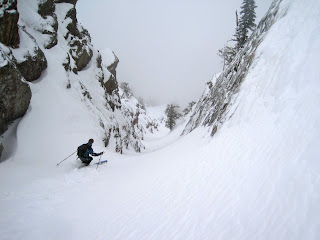 About half way down the angle lessens and the graupel had accumulated a bit. We surfed 6-12 inches of it all the way down to the great Neff's bushwacking.
Posted by SLC sherpa at 8:41 PM