Sam, Lucas, and I suffered through another day of ethics and took off to Neff's at 2:00. It was 64 degrees out and we were going skiing. Lucas drove separately, and started up before us. Sam and I followed his humangous skin track (Lucas skies Mavens, 139 under foot), and hunted him like the big bear he is. Once united, we made quick time through the slush to the mouth of our designated chute.

#5 is on the far right and is greatly foreshortened in the pic. 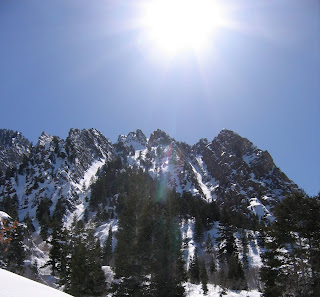 The chute is just wide enough to skin, so we put in about a million kick turns and worked our way up. The snow is protected from all but possibly the early morning sun and was that fast dense powder.

Lucas, about half way up, had to split to make it to a meeting on time. Poor guy. 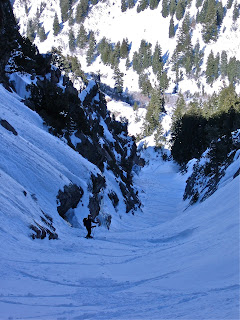 So Sam and I pushed onward. Two fashion savvy backcountry travelers. Sam in shorts (which he would later regret) and me in tights (which I rarely regret). 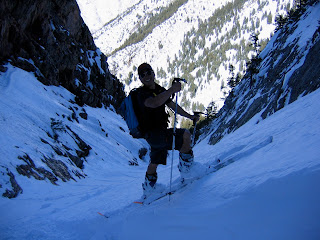 The couloir is lined by beautiful quartzite walls that create a double fall line and an adventurous ambiance. 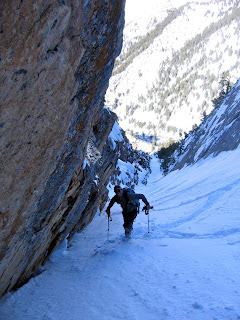 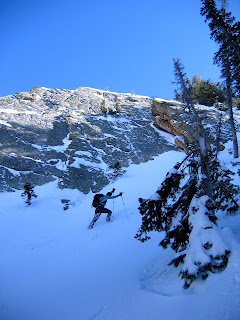 When we topped out, we realized we were standing on the rugged ridge between the two Mt. Olympus summits, necessitating a bit of rock climbing to make it to the top of a rocky pinnacle. 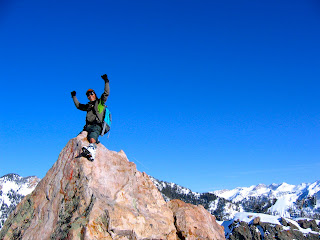 I thought today might be a junk day because of the heat and lack of good snow. Wrong again. It was another beautiful day in the Wasatch and the skiing was great. Bart, you missed out.

Sam and his cold legs 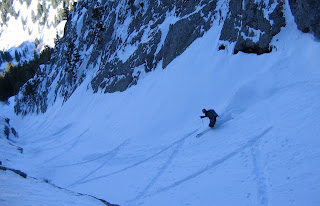