Jason and I both had the week off but weather and plans never materialized.  We were itching for some adventure and at the last minute, I hatched the idea of obtaining a snow mobile to go check out some rugged terrain in the Uintas.  Jason was on board immediately and Lars, after some convincing, finally agreed.  What's with that guy?

I picked up a rental sled from Trax Power Sports in Woods Cross on Friday evening in between making a million trips between our old house and new house to complete an annoying move.  At the shop, I watched (and sort of helped) two burly dudes muscle the sled into the back of Jason's little truck.  I wasn't sure how we'd manage out in the wild but I've been bailed out of sticky situations by burly men before and we figured we'd figure it out or ask for help.

With a 4 AM wake up it was going to be a long day.  Little did we know, we had about 20 miles of flat skinning in store making for a much much longer day than planned.

We decided on the fly while looking at Gaia Maps and Google images in the car to go check out Red Castle Peak.  At least on the map, there looked to be some promising couloirs that we made our goal for the day.

The snow mobile fired right up and we were soon riding deep into the Uintas northern slope.  Jason was on the back and Lars was towing on skis.  He only asked me to slow down once on the 8 mile ride over frozen tracks.

Arriving at China Meadows TH, we could see two sets of sled tracks ignoring the wilderness designation and the sign that plainly stated that snow mobiles were not allowed.  Lacking the same disregard, we parked the sled and started slogging.

The map hinted at an eight mile approach but reality was more like eleven.  Somewhere along the way, I realized that if we were to return the sled on time and make it home for dinner as promised, we wouldn't be able to ski anything.  I made a decision for the group that we would pay late fees and piss off our wives in the name of adventure and steep skiing.  There wasn't really any discussion as Jason and Lars were thinking similar thoughts of mischief.

We were horrified to see that our first two choices of chutes were blown free of any substantial amount of snow.  All that remained was red talus.  Quite disheartened, we chalked up the day as good recon and started walking up the talus to at least gain some vert and perspective on the place.  Topping out the dry chute, the mood changed in an instant as we discovered a cirque with a half dozen amazing chutes.  With any sense and planning, we would have been able to discern that recent 100 + mph winds from the west would result in exactly what we accidentally discovered.  Sometimes it's more fun to go in blind.


I convinced the guys that anything would be better than the chute we just climbed and scrambled over to get a better look at a promising weakness in the cliff below us.  Finally, our luck changed and I got a clean glimpse of a nice sustained chute through the red rock.  I was also realizing that this was just one of many other worthy chutes in the cirque. 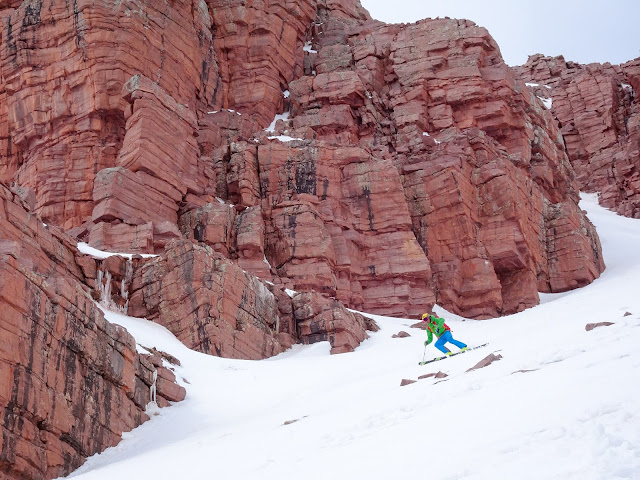 At the bottom of the first chute, I think we had all planned on skiing straight back to the car but one quick look around convinced us all to revise our timeline.  We gave ourselves thirty more minutes to climb one of the many tempting chutes in the cirque. 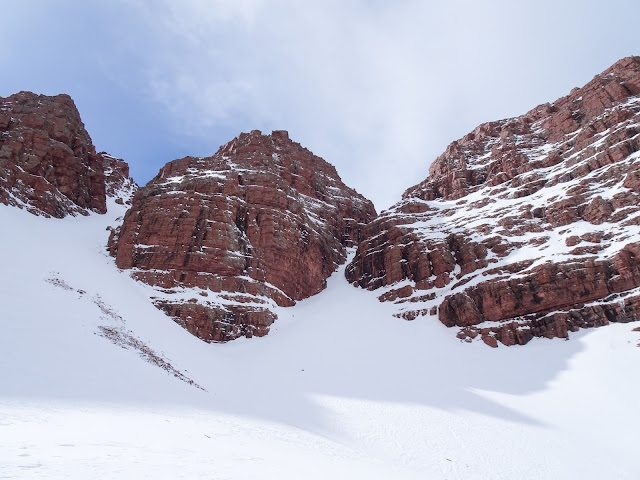 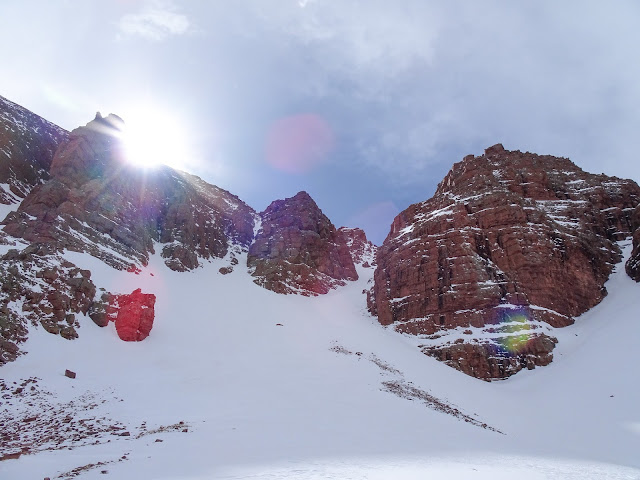 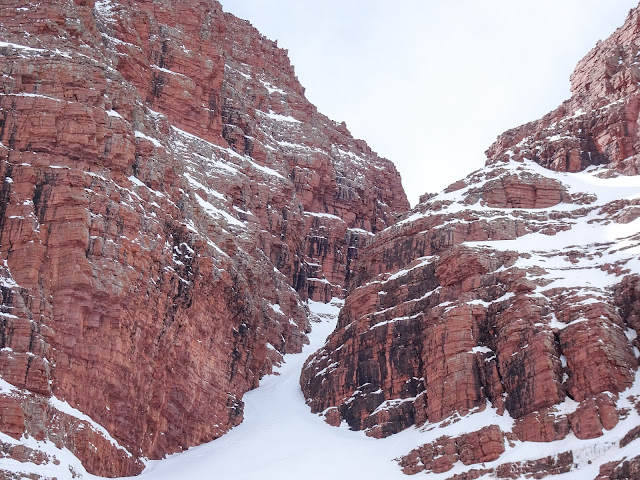 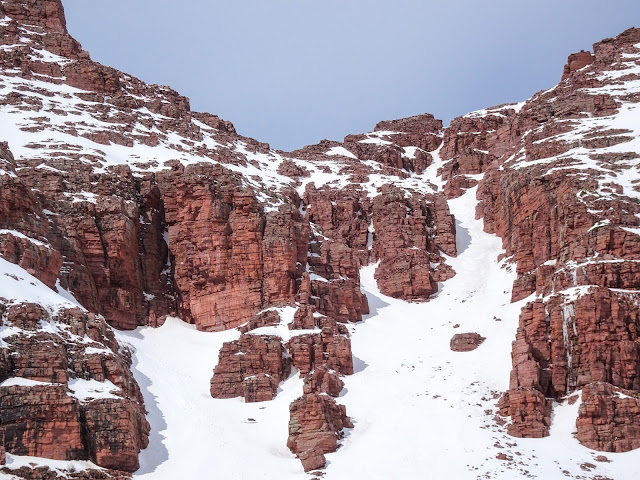 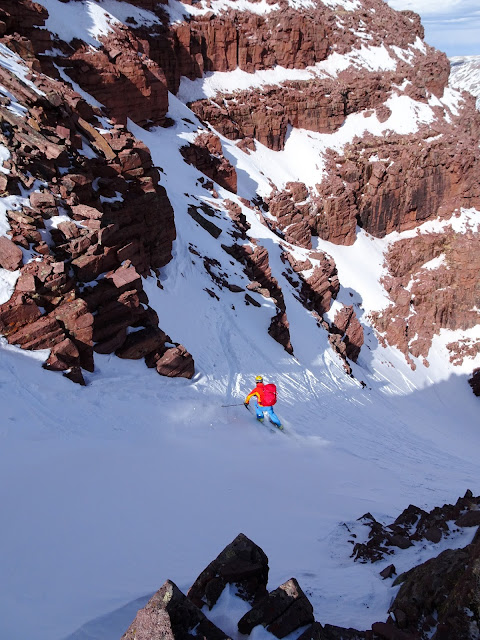 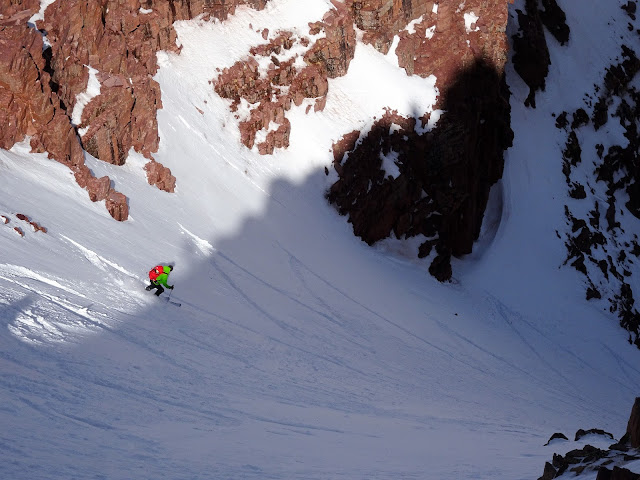 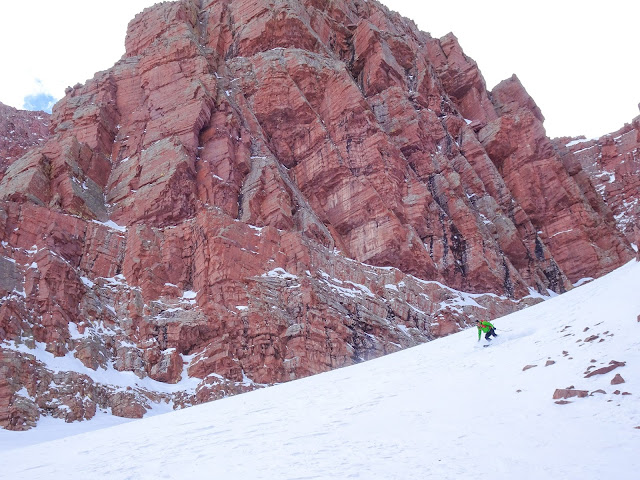 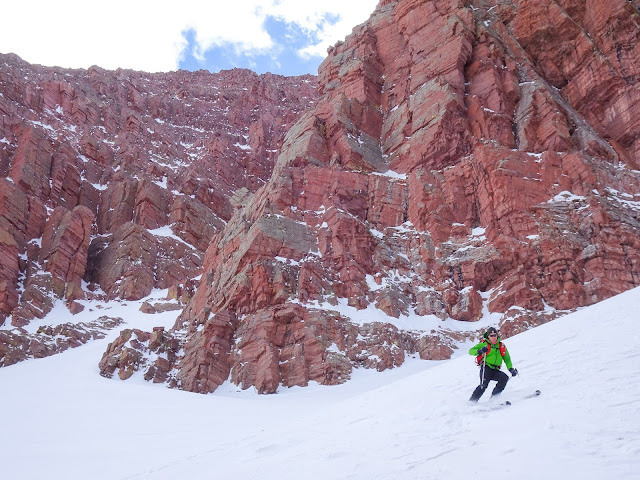 Amazingly, the out was just barely downhill enough that with a lot of double poling, we were able to ski seven of the ten miles and made it back to the sled in half the time it took on the approach. 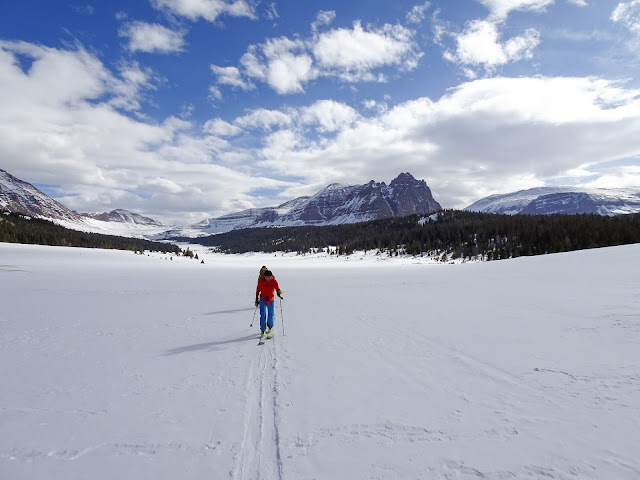 Also amazingly, we managed to rig up our skis and ride with all three of us on the snow mobile back to the truck, where a snow bank made for the perfect ramp to drive it right into the bed.  We aren't very good at power assisted adventures, but I'm intrigued by the possibilities.

We made it home only four hours late.