I went down South for another quick trip to what I am starting to believe is the premiere climbing destination in the country: Zion National Park. I know that's a controversial claim, but the canyon is wild and beautiful, typically crowd free, and always adventurous. And for me, I climb to feel wild and free, feel the landscape, and hopefully find the fleeting satisfaction that comes on the heels of a big effort. Zion seems to offer that in abundance.

Friday night trusty Jake T and I dashed out of SLC around 8:00 and pointed the car down I-15. Our plan was to climb the NE Buttress of Angel's Landing, Grade IV, 5.10+R, run down dodging the tourists, and then try to link that up with Touchstone Wall, Grade IV/V 5.10 C2. The guidebook has this to say about the NE Buttress, "A Zion Classic! ...This is a committing adventure: expect wild climbing (even for Zion)" We were incredibly psyched but a bit wary of the R rating, since other comments about the route made it sound a bit spicy. To quote a worrisome example from an online forum by the prolific Mike Anderson,

"The 5.9 R pitches could easily be called "X". I have little doubt that a fall on one of those pitches, in certain places would put you in a hospital, at a MINIMUM. I think death is not out of the question. If you get on that route, you better not fall on those pitches...so you better have your stuff together. "

Hum. Jake was to lead those pitches for sure.

Around Nephi, I realized I had left the guidebook and all beta about the route at home. Luckily, I have a sweet iphone and Jake had a pen and paper. He scrawled a copy of a mysterious topo and wrote out the pitch by pitch beta. We pulled into a lawless BLM campground around 1:00 am, bumped into some of Jake's buddies (down there to also climb Touchstone who were kind enough to lend us their real guidebook), and geared up in the dark for the next day. I quickly realized I had also forgotten my chalk bag and set out to make one from a stuff sack and some tape then it was off for an unusually peaceful few hours of sleep.

We caught the first shuttle, ditched extra gear and clothes near the Weeping Rock pullout, and scrambled up to the saddle between the Organ and Angel's Landing (Jake soloing nasty dirty 5.9ish cracks and then throwing me a reassuring line). Even at the base of the climb, the view straddling Big Bend is spectacular. With painfully blue morning skies and the Autumn sun lighting the red rock afire, Jake launched up the 5.10 off width first pitch. The rock seemed a bit damp, but he sent it smoothly and with style. A quick transition, and he was off again, calmly heading up another 5.10 off width before encountering the R section above. Finding the climbing less serious and better protected than reported, he polished off the pitch and was off again for the next 5.9 R pitch. I tried to get a picture of Jake picking his way through the mossy chossy rock, when...

I dropped my camera. It was breaking into pieces as it careened off the rock hundreds of feet below. Jake's well controlled mind space was a bit disrupted by all the screaming, but he found the natural line, some good pro, and the motivation to keep climbing through what has been described as "vertical bush wacking." 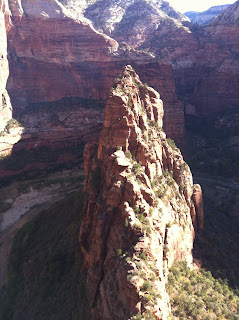 A look across toward the Cerberus Gendarme and Touchstone 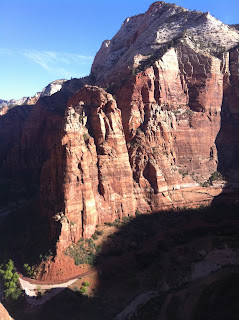 View up the unaesthetic pitches 3 and 4 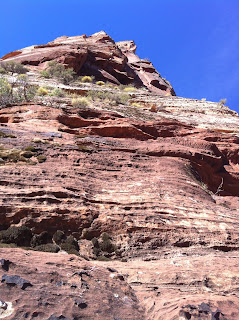 Next, Jake fired the crux 11- Conrad Anker variation pitch, finishing his block of terror (that really wasn't too terrifying).

JT about to pull patina 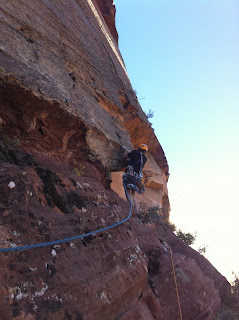 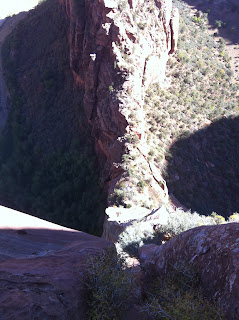 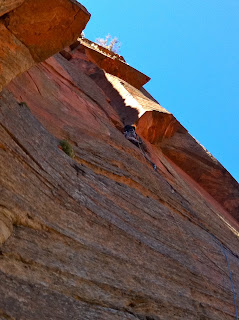 From there, it was my turn to run it out a bit, trying to link 3 pitches to the top. 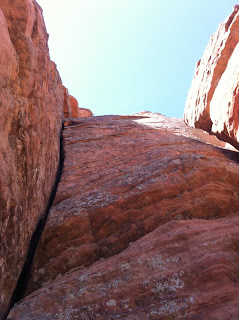 JT not pleased to be carrying the shoes and water. 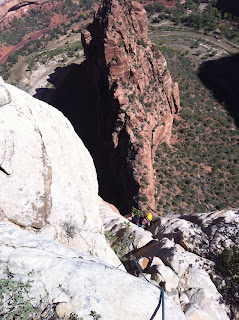 A few hundred feet of 3rd class (where we found tons of garbage dropped off the top by sloppy tourists) led to a final easy slab of heroic soloing. 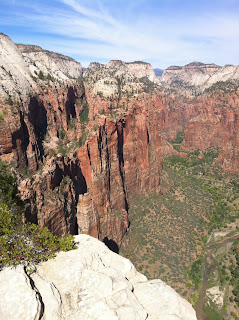 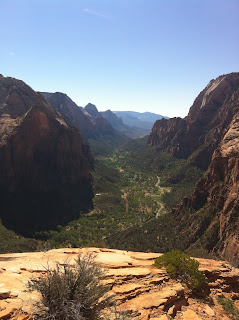 At that point it was about 12:30. It was still early in the day but we were anxious to get started on part II. We ran down the Angel's Landing hiking trail paralyzing the tourons who maintained a white knuckled death grip on the chains as we hopped by. We guzzled water at the Grotto, collected our gear at Weeping Rock, and found ourselves at the base of Touchstone around 2:30.

I ran the first two aid pitches together, Jake frenched the 5.11, I pulled on a bit of gear on the next 5.10, and then it was brilliant (easier) climbing the rest of the way. We topped out around 7:45, finishing our link up in approximately 11 hours and 15 minutes.

Here are some scenic shots from Touchstone as we raced the sun. 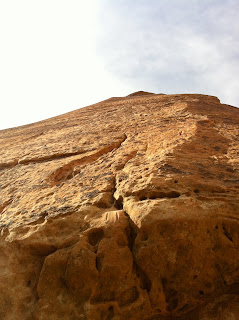 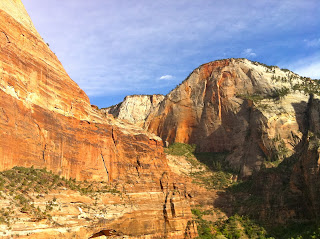 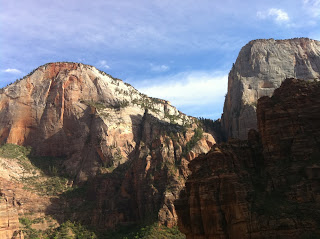 Part I forms the left skyline of Angel's Landing 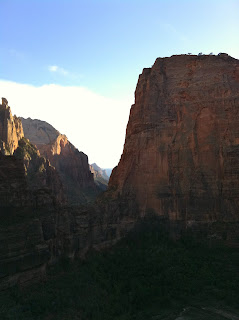 The descent is a fun scrabble/canyoneering adventure, especially in the dark. We found the rappels quickly, managed to pull our ropes, and made it to the deck with plenty of time to spare to catch a shuttle back to the car, avoiding the long march out by foot.

I think this picture pretty much sums it up: 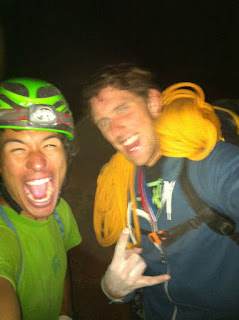