From Glacier to Glacier (Montana to British Columbia)...A Pilgrimage 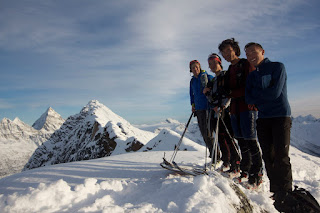 (The crew on the summit ridge of Mount Cheops, BC)

Just got back this morning after an all night push from Roger's Pass in Glacier NP, British Columbia. Brother JD, samurai Jared, the original Bart G and I left SLC last Thursday and went on a whirlwind tour of some of the most inspiring and breathtaking terrain in North America.

Here's the quick and dirty.

And here's the long picture version.

We woke up Friday morning itching to ski in Glacier NP (in Montana), but had been warned by the locals that the snow was thin, the approaches heinous, and the weather miserable. To the park we went.

At the head of Lake McDonald stands a relatively smallish peak called Mount Stanton. Small by total elevation that is, but decently large by total relief of over 5,000 feet (which was a theme for all the mountains we visited). 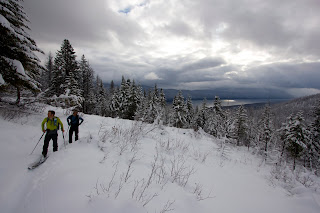 Heading up into a large slide path on Mount Stanton with Lake McDonald in the background. (Only took ~4 miles of flat skinning to get here)

Feeling vulnerable, we broke a track up a forested sub ridge that turned into a rime iced old burn. 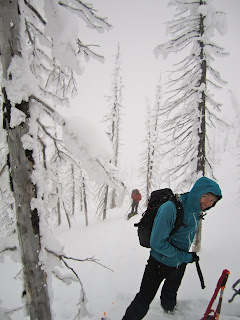 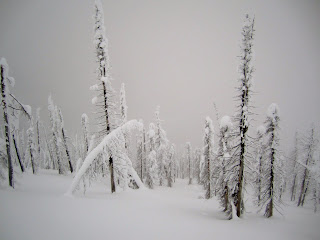 After punching it above the trees, we became lost in the clouds and entirely too exposed near the starting zone of a huge slide path. Only 500ish feet from the summit, we turned it around and enjoyed ridiculous powder through the above pictured trees...way too early in the trip to try and get all radical.

From there we made our way to Golden, British Columbia, where the next day we were flown into the Meadow Hut, nestled way back in the Esplanade Range.

From the Heli on the way in 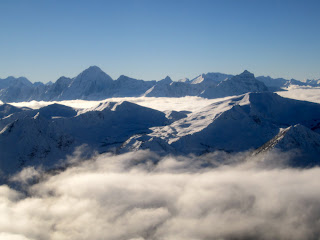 The Meadow "Hut" with Mount Cupola in the background. 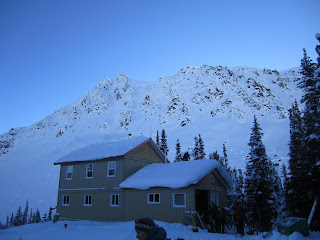 Our group joined 10 others (many of the fastest in Canada and the US) as we were gathering for the first annual Selkirk Classic ski mountaineering race. Put on by Golden Alpine Holidays, the race is held entirely in the backcountry and runs from the Meadow Hut, over Mount Walkabi, along Paradise Ridge, up Mount Cupola, over Sun Bump and Corn Peak, and down to the Sunrise Hut. Our first afternoon, we toured out of Meadow to get a feel for the course and to check out the scenery. 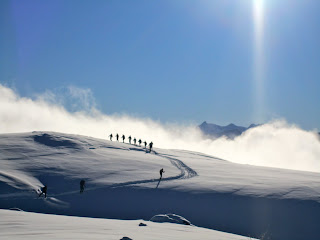 Zahan, Jared, and Bart nearing the summit of Cupola 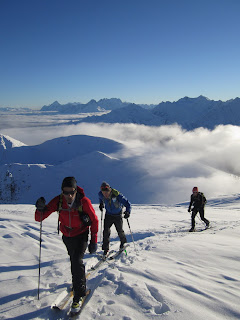 Jared with Mount Sanford in the Background 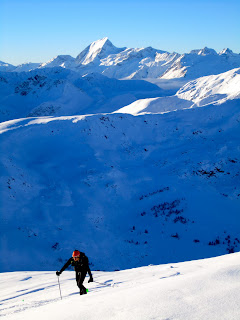 Alpenglow on Mount Cupola, highest peak in the Esplanades, with the Rockies across the Columbia Valley 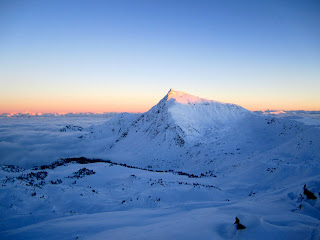 Alpenglow on the Selkirks 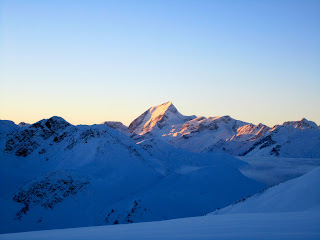 The race the next day was a good time with many of the racers from the US and Canadian national teams participating. Jared nearly pulled it off with a 2nd place finish, being edged out by Reiner of the Canadian team. Bart was a solid 4th. I was a meager 7th. And, Jason was 11th or so. I think I'll be back next year too as it was super fun.

Looking at this picture, you know there were some fast people in attendance. 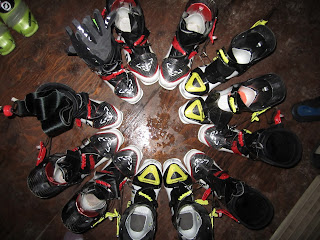 An exciting flight out, buzzing ridges TGR style before banking hard through the cloud deck and back to Golden, brings us to...

From Golden we headed up Roger's Pass for our pilgrimage to Mecca. Joining forces with the Jackson crew of Z, Nate, and Carey, we convinced Revelstoke local Reiner to spend a day showing us around. We ended up putting in a Greg Hill style day, skiing Video Peak, from the shoulder of Peak 8812, Mount Cheops, and one last lap up Balu Pass to notch a 10,000 ft day.

Here are the pics: 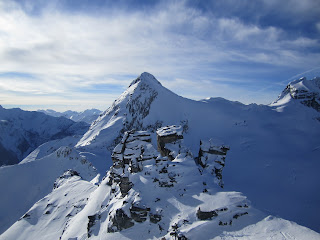 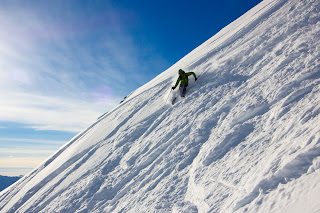 Bart got a new camera and has become Ansel Adams overnight. Here he is on the summit ridge of Mount Cheops, probably explaining to us the finer aspects of photography. 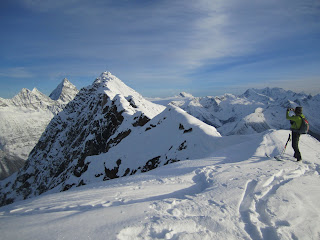 Jared booting out of a couloir on the shoulder of Mount Cheops after he and Bart tried to get radical and discovered it cliffs out. 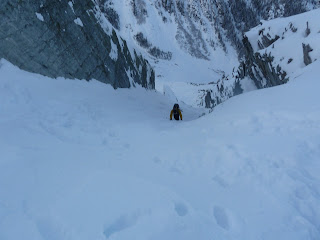 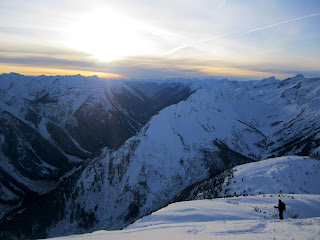 The next day we awoke to cloudy skies, and knowing we had a long drive ahead, we decided to still try and make the most of our time and headed up the Hermit drainage. We hoped to catch a glimpse of Mount Rogers, Swiss Peak, Mount Sifton, and Little Sifton but the weather looked sour. Since we were lacking in glacier gear, and fighting poor visibility, the plan was to summit and ski Little Sifton. It almost went as planned. 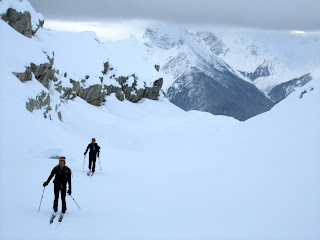 Feeling for the summit of Little Sifton. 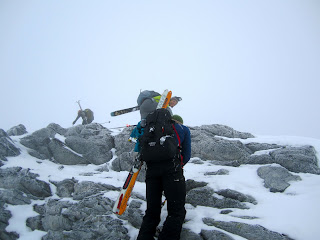 I tried to put a boot track up the final hundred feet, but a large cliff to my right and a 3 foot wind slab over some nasty facets dissuaded me. We turned it around from there and laughed for 5,000 ft of powder and pillowy features en route to the car and 16 hours later, we pulled into my driveway still laughing...

...particularly thinking about this picture that Ansel Bart shot on the way home. 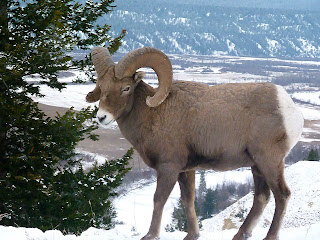 I'll make a video of the trip over the next couple days that should give a different perspective on the areas.
Posted by SLC sherpa at 11:24 AM