On Tuesday afternoon, I finally got my chance to follow in little brother's footsteps and ski tracks.  Joining Jason and I were Tom Goth and Teague Holmes, two of our regular Wasatch partners who also can't get enough of the Tetons.  We left my house mid morning due to work and family constraints, drove straight to the Tetons making record time, and immediately started up Garnet Canyon.  The timing wasn't ideal but our window was small.  A storm was forecast for Wednesday evening and we hoped to be done and headed home to Salt Lake before that.

With heavy packs, we worked our way up the highly traveled skin track into the South Fork of Garnet. It was blue bird and calm and we were stripped down to short sleeves.  Suddenly, we were on the summit of the South Teton, seemingly having been transported there without any effort.  It was a spot I'd been to some years ago with the merry Graham Kolb, but had never been in winter.  We took in the sweeping views before making a scratchy descent of the Northwest Couloir as our first choice, the East Ridge, appeared to be mostly rock.

The traverse over to the Middle Teton was smooth and fast and soon we were booting up the Southwest Couloir, hoping to make the summit before dark.  This was the first line I'd ever skied in the Tetons and it's amazing how those bumbling days brought so much psych (for the record, I'm still bumbling around and still just as psyched!).  We took turns pace lining the booter and topped out with plenty of sun left to shoot photos and ogle the Grand.  What we should have been doing was working our way down the rocky section from the summit toward more skiable snow on the Glacier route.  Instead we waited until it was dark, making route finding a little onerous even though I'd even skied it once before with the mirthful Chad Ambrose.  That day the coverage was much better and we were able to ski from very near the summit.  Oh, and the sun was up so that made it easier too.

Fortunately, as I skied off into the black abyss, I suddenly had a very distinct recollection of the route and navigated through the correct rock band.  Teague joined me next and led the way down to the chute like terrain below the main face.  We regrouped and laughed our way down to the Moraine.  Looking up as the guys skied down to me, the stars were brilliant and dense and light from the headlamps was dancing on the steep rock walls much in the way light shimmers off a body of water onto surrounding features.  It was the highlight of the trip.

Since our timing was so weird, we stopped at the Moraine to rest, melt snow, and cook.  It was a huge departure from our normal style, but it was rejuvenating and tremendously fun.  Our hope was that we would burn some darkness, summit the Grand, and ski in the dawn light.  It almost went as planned.

While laying on ropes and our packs, Tom dutifully tended to the stove and melted liters of snow and cooked Ramen and Mountain House meals for us.  We've been tormenting him, saying that he only wears black and ruins our photos and that he never carries a camera to contribute.  He said that by being the cook that we are now even.  Sipping the salty hot beef broth, I completely agreed with him.

Trying to stay warm, I almost fell asleep as Jason and I pseudo spooned, but when I started to shiver, I declared it time to go.  It was one o'clock.

Psyched to be on the Grand again, we made good time up the rock solid Teepee Glacier, following a frozen boot track from warmer times.  With a group of four, the ice bulges in the Chevy took a little longer than normal but Jason led the way and we followed with one tool each and a variety of crampons.  In the Ford, I started to feel a little dizzy as I followed the orb of light in front of me.  We reached the alcove just below the summit sometime before 5 AM and realized our timing was again a little weird.  Either we ski the GFT in the dark, or we would have to sit around waiting in the dark.  Mercifully, it was calm and relatively warm.  We lied down and even fell asleep for a few minutes.  We spooned again for warmth (all but Tom), but were again prompted to action by shivers.

Tagging the summit, we walked off to the east a few feet to gain shelter from a sudden westerly wind.  There, we readied ourselves for the harrowing descent of steep dark ice.  Jason set off from the summit block and made a turn through the rocks.  He joked that that one turn was going to be the only one.  Back at the alcove, I led out down the East Face toward the Ford Couloir.  It was firm but my edges were sharp and I felt secure.  It was a supreme feeling to be skiing the Grand by the light of the stars and moon.

That feeling was lost rather suddenly when we entered the Ford as it was steeper, more firm, and much less secure.  We timidly made our way down to a steep roll over and called it quits.  To ski the Grand requires some aid and this day we chose to aid a little more of it.  We down climbed to the standard rappel station at the top of the Chevy.  A couple raps later, the mountains were glowing red and the long night was over.

With much surprise, we found a strip of soft snow sheltered by the Teepee Pillar itself but that didn't last long.  Bullet proof snow was the name of the game and in this less intimidating setting, it was actually pretty fun.  Wanting just a little more, we continued down the Dike Couloir and made the sweeping traverse past Delta Lake around to Bradley and back to the car.

Up next came an unhealthy amount of food followed by the hardest part of the whole endeavor.  The red eyed drive home was the crux but with that in the rear view, all that remains are fond memories of a day that I've dreamed about since sitting in the hospital when my phone kept buzzing with those damn pictures.

Speaking of, here are a few from this version of the Trifecta: 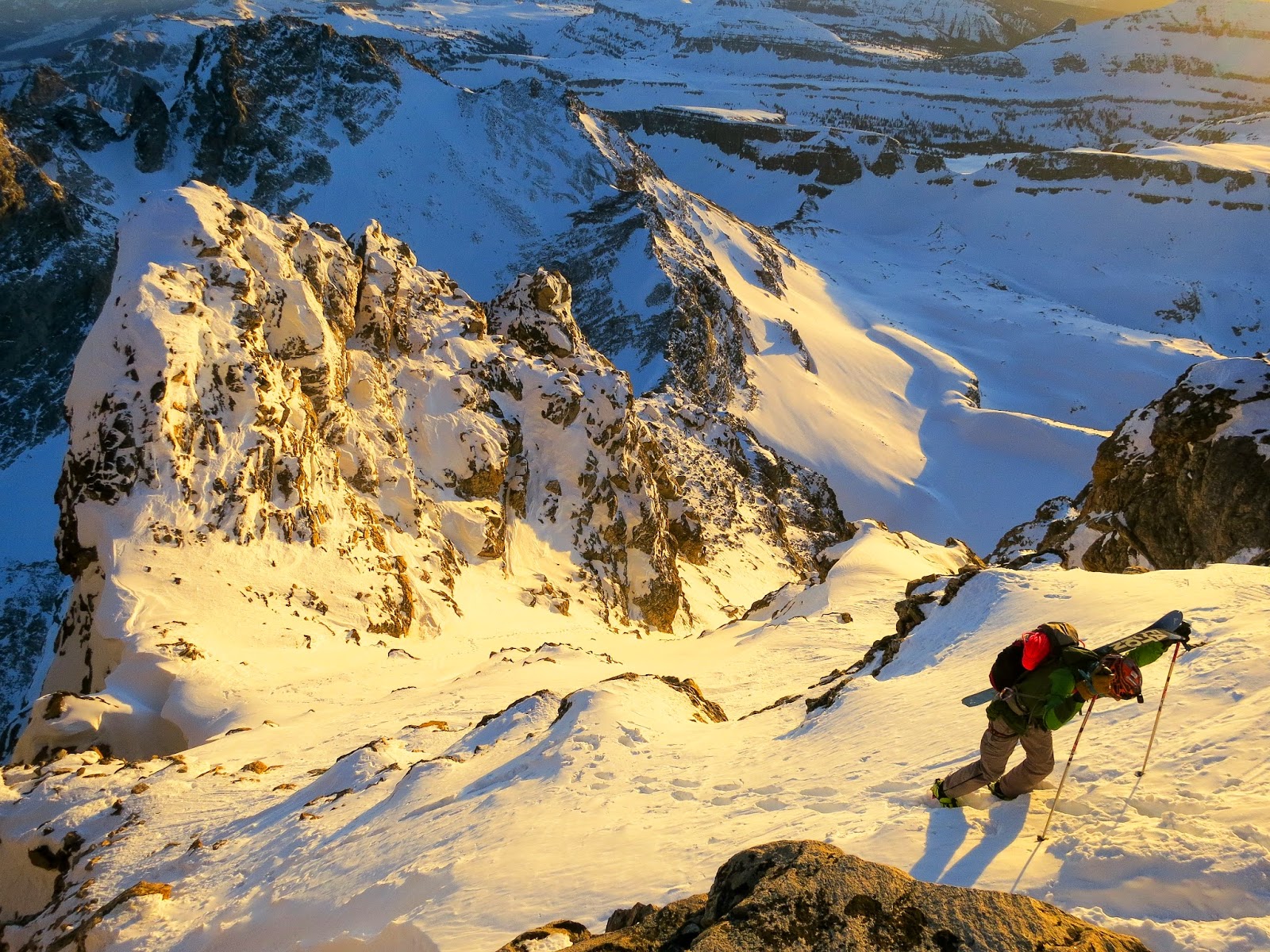