The Oquirrh Traverse In a Day (OTIAD)

Thursday night, brother JD and I were trying to figure out something exciting to do. The weather forecast came up surprisingly sunny for Friday. Having skied some powder that day, we realized the storm snow wasn't likely to cause much of a problem in the bastard cousins of the Wasatch across the valley.

It's strange how an idea formulates itself. I've been staring at the Oquirrhs for years. This year I thought about traversing the range. It's become an obsession.

The plan was to traverse the whole Oquirrh range, starting in Ophir, and tagging every summit from Lewiston (farthest south) to Kessler (farthest north), including all the sub peaks along the ridge until able to ski out the Black Rock Canyon down to I-80 and the Great Salt Lake. This would include at least 12 named peaks and numerous other undulations along the ridge. We figured the distance would be around 35 miles with a total vertical of...?

Up at 3:30 AM on Fri morning, we dropped a car at a view point of the Great Salt Lake around mile marker 101 on I-80. We then drove out to Ophir Canyon and began the familiar climb up to Lewiston Peak. Mostly in the dark, this went smoothly and about two hours later, one summit down, we moved over to Flat Top under grey, windy skies.

JD on the summit of Flat Top, Utah Valley in background. 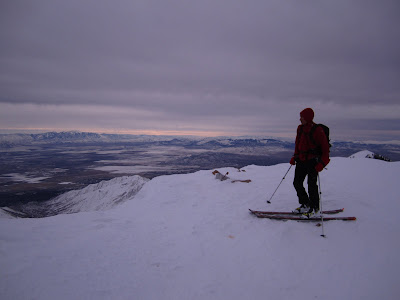 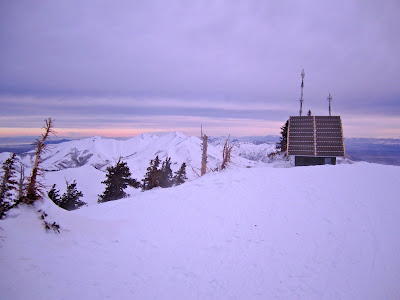 On the ridge between Flat Top and Lowe Peak, the winds almost became unbearable. We both had every scrap of clothing we brought on and fully zipped. Questioning the weather, we pushed on, still able to retreat if needed. Unfortunately, JD failed to heed big brother's advice and only brought one set of skins. This proved unwise as his tail clip broke and he didn't have enough glue/stick to keep his skin intact over the next 30 miles. The solution proved to be using climbing tape to keep the tail in place. Transitions were speedy. 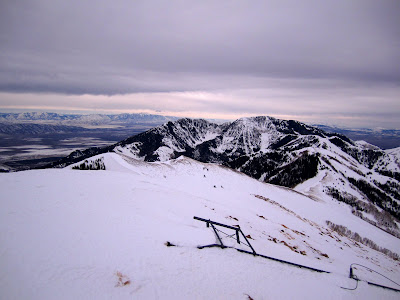 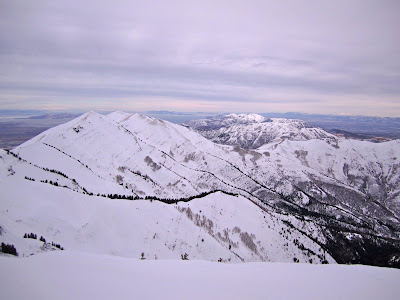 JD finding a strip of snow on the west aspect of the Lowe Peak. This typified the skiing of the day. NE faces looked much better but were wind loaded and often would lead to more difficult travel conditions or take us off route. 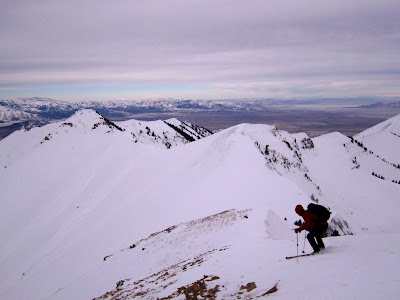 From Lowe, it was over a few more sub peaks to Kelsey Peak, named for the first woman to come to Utah. Beyond Kelsey, the ridge took us up to another prominent point where we were both knocked flat by wind gusts. I immediately hopped off the other side and transitioned, slightly sheltered from the wind. JD remained pinned by wind on the summit for a couple more minutes, clutching his skis, fearing being blown over the cornice.

Eventually, we made our way down the NE face and over the Butterfield Peaks. These small mountains lay on a more E/W ridge, which we traversed before dropping down to the top of Middle Canyon.

From one of the Butterfields looking south 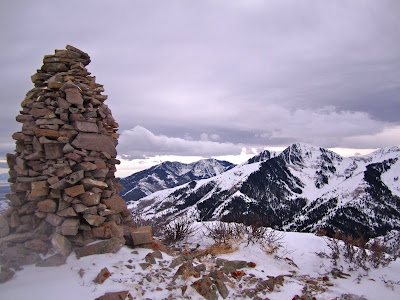 At the pass, we stopped to melt snow and were bummed to find that my JetBoil stove wasn't functioning properly. It took near an hour to melt 3 liters. Impotent to change the situation, we waited in the cold.

I thought we were about a third to half of the way done. It was 2:00 PM and we'd been moving for 8 and 1/2 hours. On our feet again, we were stiff but quickly loosened up and found our way over West Mtn and Clipper Peak. It was at this point that the day took a 180 with clouds lifting and the winds calming. And, although the mountains became less impressive, the view was interesting. 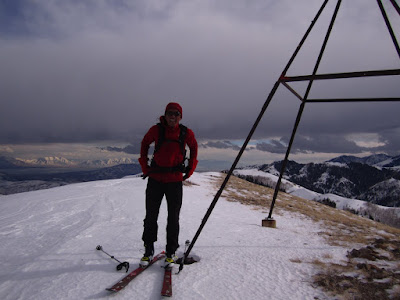 The Sherpita waving at the mine workers 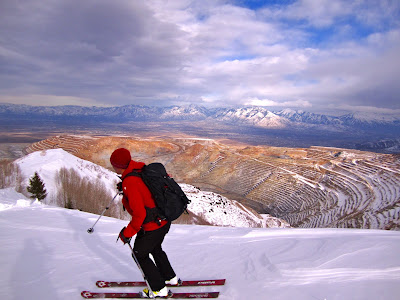 An old tram station? The traverse was full of odd decrepit structures. 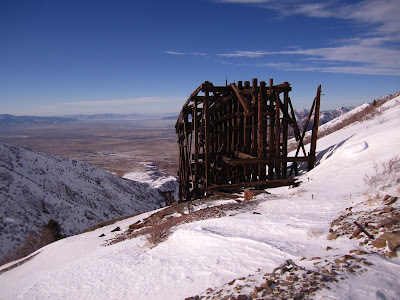 Another shot of our destructive power 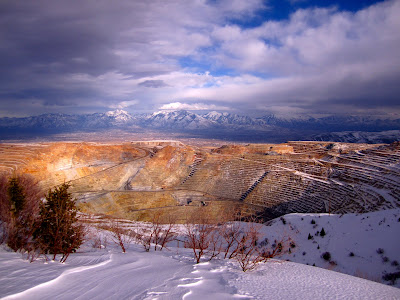 And one more because it was so mesmerizing 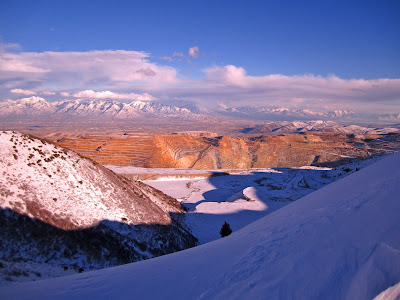 From here, we could see the rather low lying ridge that would take us to Farnsworth Peak. It looked intricate, riddled with shrubs and rock bands, but we could see a road on the other side which we could take up Farnsworth. We had about an hour of daylight left and chose to spend it melting snow, readying ourselves for a potentially long night.

Blurry pic of our dear friend the moon which allowed us to travel and ski for hours without headlamps. 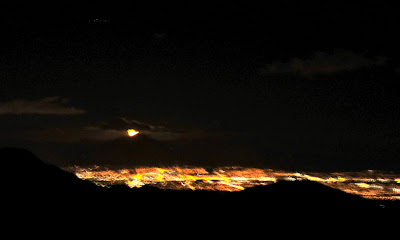 We made it through to Farnsworth relatively unscathed. The ridge did not let up with a few more ups and downs leading to Kessler. 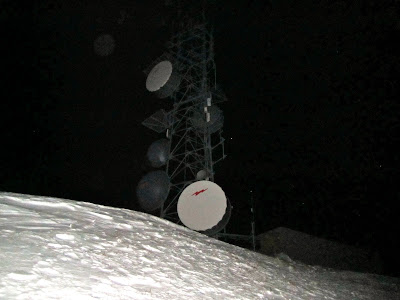 We took another hour to melt snow and then while heading up Kessler, my wife called wondering how much longer I'd be gone. I optimistically guessed 2 more hours. Hmmm. On Kessler, we traversed under the radio towers, skied it's North Ridge, and found ourselves looking up at one last peak. After midnight, out of water, and hungry, we pushed for the top...

Where we were startled to find ourselves staring at one last peak...

Heartbreaking but kind of funny.

After one AM, out of water, and hungry, we pushed for the top...

This time, the great black expanse of the Great Salt Lake opened before us with the dimly lit I-80 corridor running along its south shore. We ripped skins for the last time and picked our way through cliff bands and gullies until our skis began to moan from the shark fins lurking under the increasingly shallow snow pack. From there it was another few miles on foot, crossing dirt roads and rail road tracks before finally stumbling out onto I-80 and stopping the watch at 21 hours and 10 minutes.

A view of our amazing 3000 foot moonlit descent down Black Rock Canyon. 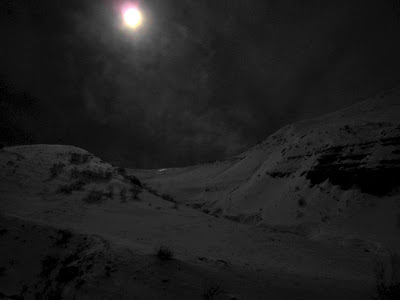 For those unfamiliar, this is the big north facing bowl just west of the smokestack on the end of the range. We ended up right at the eastbound off ramp at mile marker 102. Unfortunately, we parked our car at the viewing pullout around mile 101ish? Feet haggard, we pulled off our boots, stashed our gear, and walked barefoot along I-80 for a mile back to the car.

So, has the Oquirrh Traverse been done before? Probably. In a day (IAD = under 24 hrs as is common in rock climbing parlance)? Probably not. And, the line we established from the VERY southernmost peak to the shore of the Great Salt Lake on I-80 is, at least in my mind, proud. It was between 36 and 40 miles and gained 16,000 vertical. We were unsupported, and it was all onsight except the beginning up to Lewiston/Flat Top as we'd done that "approach" last week. This was a great tick for me and the first of a few big projects this year. We could have been faster for sure. A broken skin and malfunctioning stove killed hours. That leaves some room for the next guys though. You know who you are...
Posted by SLC sherpa at 8:42 AM